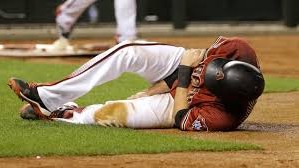 Every year fantasy baseball managers from coast to coast yell, scream, punch walls, and drink copious amounts of alcohol for one reason……..well, for many reasons, but the one I was referring to is injuries in fantasy baseball. Nothing can derail that dynamite draft that you had than watching your guys go on the Disabled List for weeks, months, or the season. The bigger question becomes how do you handle them the following season? Are they going to get hurt again? Will the injury linger? Or will they have a fantastic season? Below are guys who finished the season (or almost) injured and what we can expect from them coming into 2017.

A.J. Pollock, Arizona Diamondbacks. A busted elbow cost Pollock the majority of the 2016 season, and a groin injury finished it off when the Diamondbacks were nowhere near playoff contention. It wasn’t the first elbow injury in Pollock’s career, but he is fine to go in 2017 and the groin injury is no concern either. I thought Pollock was overrated coming into 2016, and he will be more on par with his value this season. It was a devasting blow to fantasy teams last season, but Kyle Schwarber will be ready to start the new year and start to crush pitching immediately!

Kyle Schwarber, Chicago Cubs. A torn ACL ruined what was going to be an amazing first full year in the Majors for Schwarber. He made a guest appearance in the World Series, which means he will be ready to go once Spring Training rolls around. He won’t be playing there, but I’m assuming that Schwarber will still be catcher eligible which makes him extremely valuable. Barring another freak injury he should be a sure thing for 30 home runs, a .240 average, and 195 strikeouts.

Gerrit Cole, Pittsburgh Pirates. There is no doubt that at 26 years old, this kid has some of the best stuff in the Major Leagues. However, you also can’t deny that he has missed a solid chunk of time due to injury in two of the last three seasons. Elbow inflammation cost him a decent amount of 2016, and he was disappointing when he was on the mound. Cole still should be viewed as one of the top 20 pitchers in fantasy, but he is earning himself an “injury prone” label that is hard to shake once you have. Draft him, but do so with caution. After a legendary start to his Major League career, fantasy owners are hoping that Story will be able to pick right back up where he left off this season!

Trevor Story, Colorado Rockies. Story was one of the more electric players in all of fantasy baseball last season as he set the world on fire with his home run binge to start the season. He was able to keep it up after April and ended the season with 27 jacks. A torn ligament in his thumb ended the wild ride in August. He will be fine to start Spring Training, and there’s no reason for the injury to effect where you draft him in 2017. He will be among the top shortstops coming into the year.

Mike Moustakas, Kansas City Royals. A torn ACL ended his season in May, and while his batting average was back down where it normally was, Moustakas was flashing the power again. After a career high 22 jacks in 2015, Moustakas had seven in just 27 games in 2016. Reports are that he will be set to go when Spring Training opens, when he will be about ten months away from his surgery. Even if he misses a little bit of the Spring, Moustakas can be ready for April and the start of the year. He will likely be a little undervalued in drafts this season.

Whether it be position players or pitchers, the recent past of the New York Mets organization tells us that their training staff has not been able to diagnose injuries well, nor have they been accurate on timetables for return. It seems that this team suffers more injuries than most lately, making the team a concern. The list from last year is mindblowing. Harvey has a world of potential but his body has betrayed him in the past, can he put that behind him and dominate in 2017?

Matt Harvey. I love Matt Harvey with every ounce of my heart, soul, and being. I am not a Mets fan, but I believe this guy has the stuff to be a dominant pitcher. He had surgery for Thoracic Outlet Syndrome, which is a very difficult injury to come back from, but others have done it. This hasn’t been Harvey’s first brush with the Disabled List in his career, so be cautious when you draft him. There have been no reported setbacks with his rehab to this point so he is a huge risk/monster reward candidate for 2017.

Jacob DeGrom. Last year was very disappointing for DeGrom on the mound, and then ended in severe disappointment with ulnar nerve damage in his elbow. The surgery was a success, and he is expected to be ready for Spring Training without any restrictions. DeGrom hasn’t had much of an injury history in the Majors, so I am drafting him the same as I would if he had a healthy season.

Steven Matz. A bone spur in his elbow and shoulder issues both kept Matz in the dugout instead of on the mound in 2016, and this young man is certainly getting a reputation of being injury prone. He certainly has great talent, and great swing and miss stuff, the kind that has fantasy baseball players salivating. The problem is being able to trust him for any stretch of time during the season. I really like Matz, but I am really, really concerned about his durability. If he was healthy he might be a low end SP2 or a great SP3, but personally I can’t trust him that soon. The chance of him ending up back on the shelf is too great. Wait another few rounds after he probably should go to get good value.

Zach Wheeler. He had Tommy John Surgery in March of 2015, and setbacks kept him off of the mound for all of 2016. It has now been since 2014 since he has been on a Major League mound, and even though he is set to return in Spring Training, the question is how rusty will he be? Will he earn a spot in the Mets starting rotation? I do believe that he will be the Mets’ fifth starter to begin the year, and hopefully he will be healthy. Wheeler is another high risk/solid reward guy, but his ceiling isn’t as an elite pitcher so be careful not to stretch too soon for him.

Lucas Duda. A stress fracture in his back cost Duda most of the season, as he played in just 47 games. He was able to return in the last week of the season, so signs are definitely good for him for the start of 2017. He is never going to be a high batting average guy, but Duda has the chance to hit 30 home runs in a season, and given where you can draft him, that could be incredible value. He is certainly not who you want as your starting first baseman, but he is a good utility player or great injury insurance on your bench.

Neil Walker. He was one of the more productive second basemen in fantasy baseball before a back issue ended his season early. Still 23 jacks from a position traditionally starved for power is pretty impressive. Walker bet on himself by accepting the Mets qualifying offer for one year for $17.2 million, so he will certainly be motivated to try to get the big, multi-year contract. After the cream of the crop is gone at second base, I feel that Walker is a great consolation prize in your draft.

Lance Lynn, St. Louis Cardinals. Lynn had Tommy John Surgery back in November of 2015. And while he was making an attempt a comeback last season, the team decided against it. After a couple up and down seasons, Lynn had been spectacular in ’14 and ’15. This will be the final year of his contract, so Lynn will be extra motivated. Look for Lynn to be a nice later round selection to return great value.

Greg Bird, New York Yankees. After a quick, impressive stint with the team in 2015, Bird was expected to compete with Mark Teixeira for playing time last season. A torn labrum in his shoulder any thoughts of that, and Tex was the Yankees first baseman for most of the year. However, he retired at season’s end, and Bird looks ready to go for Spring Training. He had 11 homers in just 46 games in 2015, so the power potential is mighty. Assuming that Bird’s injury problems are behind him, I think he has a shot to be a major sleeper in 2017. Not only did Sonny Gray get hurt in 2016, but he was awful when he was on the mound. Can you trust him this season?

Sonny Gray, Oakland Athletics. Forearm inflammation cost Gray a decent chunk of the season, but he was able to return for a single inning by the end of the 2016 year. He pitched like crap last season when he was on the mound, so you have to question how healthy he was all season. That being said, he should have a clean bill of health coming into March, and his name has been in trade rumors all over the place. That last part has to have you optimistic for 2017 as if there were injury concerns perhaps not so many teams would be calling Oakland about him.

Jordan Zimmermann, Detroit Tigers. Neck and lat injuries cost Zimmermann the end of 2016, and it didn’t make him perform well when he was on the mound. However, a near 5.00 ERA and a near 1.40 WHIP is certainly not what we thought we would get from him this year. He is healthy, he is owed a boatload of cash from the Tigers, so he will given every opportunity to succeed. The risk is high with Zimmermann, but he should be a reliable part of a strong team’s pitching rotation.

Shin Soo Choo, Texas Rangers. Choo had the variety pack of injuries last year that sent him to the Disabled List, including hamstring, forearm, calf, and back which limited him to under 50 games. It was the second time in three seasons that he played under 125 games. Choo has been a frequent visitor to the Disabled List, and now that he is 34 years old that is likely to continue to happen. The Rangers are reportedly going to use him a lot at DH in an attempt to keep him healthy. While I’m not a huge Choo fan, that last fact helps his value to an extent.