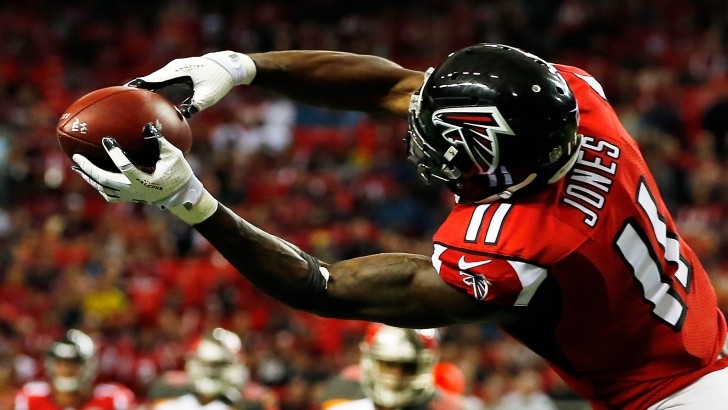 The NFL Draft has come and gone, and now we can really begin our player breakdowns, schedule analysis, and never ending debates over who in your league is taking at each pick. I am here to break down the most important pick, number one, and I will give you a few arguments to really help, or hinder things in your thought process. Who should be the top pick in fantasy football this year? Depending on your format it could be one of many players, up to 15 possibly. But as I see it, there are five guys who put it down last year, and four of them are repeat performers. Unless you are in a quarterback heavy, scoring frenzy league, these are your weapons of choice.

David Johnson (RB, Arizona Cardinals): Simply the modern day workhorse in the NFL, David Johnson runs, catches and scores...and does all exceedingly well.  DJ had 80 receptions last season, which tied him for 20th overall with Carolina tight end, Greg Olsen for receptions. Johnson amassed 879 yards and four touchdowns receiving, which was an average of 52.4 yards receiving per game.  Finally, good health makes DJ most appealing to me over the others in this top five. His rushing output in his first full season did not disappoint either, as he rushed for 1239 yards, along with 12 touchdowns. Johnson has the seventh easiest schedule for running backs this season if that matters to you, and the 20th easiest schedule for playoff weeks 14-16.

While he may have some off-field baggage, Lev Bell still makes a very nice case to be selected number one.

Le’Veon Bell (RB, Pittsburgh Steelers): Pittsburgh Steelers General Manager, Kevin Colbert, told the media that there is "no timetable" for running back Le'Veon Bell's return from the groin surgery he underwent in mid-March. "Our goal is to have him 100 percent for the 2017 season," Colbert said Sunday.

Bell is an amazing talent who has had injury and personal issues over the past few seasons, but when he plays, he’s extremely dangerous every time he touches the ball. Even against one of the toughest strength against schedules, Bell is match-up proof. I do not see him going below the third pick in any drafts in 2017.

Antonio Brown (WR, Pittsburgh Steelers): The most effective wide receiver in the NFL over the past three seasons, Antonio Brown has been absolutely lights out. About the only negative, is that he suffers when Big Ben gets dinged up and misses time, and unfortunately, that has happened often in his career. Never being targeted less than 154 times in the past four seasons, and only missing one game, Brown is the picture of consistency.  With triple digit touchdowns in each of the past three seasons, Brown does all the heavy lifting in the Pittsburgh receiving corps, but in my opinion, shouldn’t be taken over Bell or DJ, even in PPR leagues.

It will be fun to watch and see if Zeke Elliott can repeat the dominance he served up in his rookie season.

Ezekiel Elliott (RB, Dallas Cowboys): In just his first season, Ezekiel Elliott entered the realm of the fantasy scoring elite. Well at least last for his rookie year he was. Can Zeke continue his climb in the stratosphere and build upon his rookie success?  Time will tell, but he was the only running back with over 300 carries last season, and it was a breath of fresh air to see the Bell-Cow running back take charge and destroy. Behind one of the best offensive lines in the league last year, Elliott galloped for over 1600 rushing yards, while chipping in 32 catches and almost an additional 400 yards receiving. Feel free to take the former Buckeye at one if you want, but be sure they find a suitable replacement for retired left tackle, Doug Free. You should also know that the Cowboys have one of the tougher schedules in the NFL this upcoming season, but the ninth easiest for running backs, so Zeke should still see some running room in front of him.

Julio Jones (WR, Atlanta Falcons): Julio Jones absolutely destroyed secondaries last season, and is what a dream, wide receiver looks like...big, fast, and can jump through the roof. The outsider of my top five, certainly should not be overlooked though. Jones and Atlanta have the 10th easiest schedule for wide receivers this upcoming year, and the Falcons feast on their own division when it comes to the passing game. Atlanta's fantasy playoff schedule is Week 14 vs New Orleans, Week 15 at Tampa Bay, and Week 16 at New Orleans. This makes Jones very appealing to me when picking in the top half of any fantasy draft this summer. I'm drinking the Jones, Kool-Aid again this season, and am praying I end up in the top five in many of my drafts. Jones did have minor foot surgery in March, but according to reports, he is on track to report for the beginning of training camp in July.

Be sure to reach out @PolkaPat for any fantasy advice or just to BS, and be sure to read more of my rantings at Mastersball.com