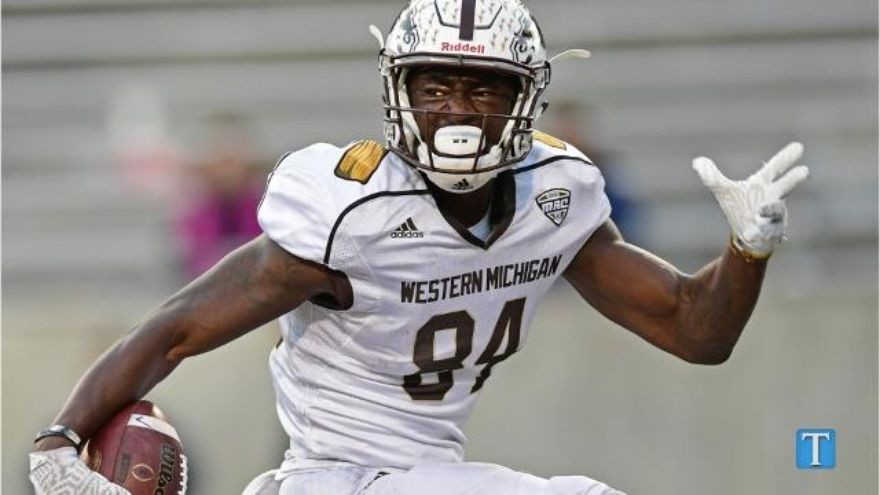 With wide receivers becoming more and more important in fantasy football, particularly in PPR leagues, it's best to be well versed on all the players in the talent pool. That includes the rookies coming in, who some may not be as familiar with. Gone are the days were it took three years for the wide receivers to make an impact. For some in the right system, they can start performing at a high level from day one. How does this years' class look? Well, I'm glad you asked because below you can find out a little bit about the top rookie receivers we will see this season.

Corey Davis, Tennessee Titans. The Titans were in desperate need to add weapons for young quarterback, Marcus Mariota, and they did just that in the draft, when they selected Corey Davis out of Western Michigan with the fifth overall pick. Davis is 6'3' and 209 pounds, and could be the best pure, wide receiver in this years draft. He is a precise route runner who can run run all the routes, and has a fantastic double move. He is very aware of where his body, hands and feet need to be, and uses his body positioning very well. Pro Football Focus has Keenan Allen as a player comp, and watching him play, I think it's a very accurate comparison.

Davis should step in from day one and compete with Rishard Matthews as the Titans' number one wide receiver. Tennessee will still be a run-first offense, but with Davis, Matthews, Delaney Walker and fellow rookie receiver, Taywon Taylor, I can see them relying more upon Mariota than they have in the past. With a better skill set, and less competition than fellow top ten receivers, Mike Williams and John Ross, I can see Corey Davis being the best of the bunch of all the rookie receivers. I wouldn't expect WR1 or even WR2 numbers from him in 2017, but don't rule out Davis being a serviceable WR3 this season. 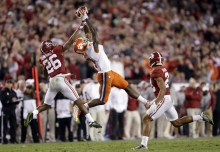 Mike Williams knows how to use his body to create space and make the catch.

Mike Williams, LA Chargers. Out of all the receivers in this years class, I have watched more tape on Mike Williams and I really like what I see. He doesn't possess elite speed, but he's 6'4', 218 pounds and can use his body to creat space and make the catch. He should hold the size advantage over most defensive backs and can be an effective threat over the middle of the field, or on the sidelines...wherever the Chargers decide to put him.

I don't think his lack of top end, breakaway speed will impact his success much in the NFL. However, I do think his competition for touches will...at least initially. Keenan Allen is returning from his torn ACL, and the Chargers also have Tyrell Williams, Travis Benjamin and Dontrelle Inman all looking for targets as well. If you add in tight ends, Hunter Henry and Antonio Gates, the Chargers could have one of the deepest pass catching units in the NFL. Williams talent should put him up towards the top of the pecking order and he should become one of Philip Rivers' favorite targets, but unless Keenan Allen gets hurt again (which is always a possibility), and the Chargers part ways with a receiver like Benjamin, Williams may not get enough looks in year one to make a huge fantasy splash.

John Ross, Cincinnati Bengals. Speed. That's the first thing that comes to mind when talking about Bengals' rookie, John Ross. Ross bested Chris Johnson's 40, when he ran a 4.22, 40 yard dash, which now stands as the fastest in Combine history. Yowzers! However, we've seen speedsters like Darrius Heyward Bey and Jacoby Ford light up the track, yet fail to live up to expectations in the NFL. Can Ross break that mold? Let's take a look at his game a little closer.

Ross' speed allows him to create seperation between him and defensive backs. That's a good thing, because at 5'11' and 188 pounds, he's not going to win many battles at the line of scrimmage or on contested passes. He uses his hands very well both to beat defenders, as well as to catch the ball. He only dropped six of his 105 catchable passes over the last two years, so he can hang on to the ball. With speedy wide receivers like Ross, sometimes they can fall into the habit of just streaking down the sideline every play to try and beat defenders with their speed. However, Ross runs a variety of routes and had one of the best slants in college football last season (per Pro Football Focus). His versatily to run different routes and create sepeartion, have me very excited for his long-term success in the NFL.

There are two things that give me concern about John Ross, however. First is his injury history. He tore his MCL in 2014 and his ACL in 2015, and for someone who relies on his speed as much as Ross, I have great concern about his body holding up. Secondly, I wonder how big his role will be in this offense, particularly in year one. He will be competing with Brandon LaFell for the Z receiver role, opposite AJ Green on the other side of the field. Throw in AJ Green, second year receiver Tyler Boyd, LaFell, and tight end Tyler Eifert, and I worry he may not see as many targets as I would like. I think he will be better in non-PPR leagues, versus ones that reward a point for every receptions, but make sure to temper expectations for 2017.

Zay Jones, Buffalo Bills. With the departure of Robert Woods and Marquise Goodwin, and the oft injured Sammy Watkins serving as the teams only real legitimate threat in the passing game, Zay Jones could be in for a heavy workload in the Buffalo Bills passing attack. Jones had a ridiculous 216 targets last season in East Carolina, which was the most in FBS over the past thee years, so he should be able to handle it. 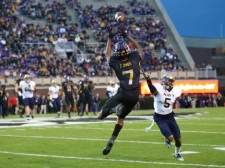 Zay Jones' hands, mixed with his athletic ability and opportunity, have me optimistic for his success in Buffalo this season.

At 6'2' and 200 pounds, Jones has nice size. While not the fastest of runners in this years draft, he is very athletic and turned in a 94th percentile performance in this years' NFL Combine (per BuffaloBills.com). What he may lack in breakaway speed, he makes up for with physicality, good route running and possibly the best hands in this years crop of rookie receivers. If he can show he can gain separation from defensive backs, Jones should have the workload to be a very productive fantasy wide receiver in 2017. If Sammy Watkins ends up missing time due to injury, Jones could very well move into WR2/WR3 territory in fantasy football.

Curtis Samuel, Carolina Panthers. I have to be honest with you. I am very excited to see this Carolina Panthers offense in action this season. The Panthers added running back, Christian McCaffrey in the first round of this years draft, and followed that up by adding wide receiver, Curtis Samuel in the second round. Here's the interesting part. McCaffrey is arguably the best receving back in this years crop of running backs, while Samuel is a slot receiver who lined up at tailback over 200 times last year at Ohio State. The Panthers have the opportunity, and now the player personel, to get very creative on offense.

While both Kelvin Benjamin and Devin Funchess stand at 6'3', Curtis Samuel is a diminutive 5'11' and 196 pounds. Samuel lined up in the slot over 400 times last season and should immediately carve up a role as the Panthers slot receiver. With both Benjamin and Funchess disappointing last season, that slot role could have significant fantasy implications.

With the Panthers having the flexibility to use him all over the field, I can see Samuel having a decent sized role in year one. He may not be a big guy, but he's got good speed and agility and can break off a big play at any time. He could be used like the Chiefs used Tyreek Hill last season and that could possibly put Samuel in the WR4 category in 2017,

Other Wide Receivers to Watch