Over the last year, the White Sox have really embraced the rebuild and stocked up on young talent. However, with so many young players, it can make for a wide range of potential outcomes in 2018. Things could click and they could become a very good team quickly, or they could have a year or two of growing pains as the youngsters try and find their groove. Let's sift through all this young talent together as I break down each position on their roster!

One good thing about first baseman Jose Abreu, is that you know what you’re going to get from him. Through four years in the league, Abreu has amassed at least 622 plate appearances each season, will net around 30 home runs and his batting average hasn’t sunk below .290. The talent around him is getting better and that could give him more opportunity to increase his RBI/run totals. I am a big fan of Abreu's and would feel great snagging him at the end of the second or beginning of the third round in drafts.

Matt Davidson came out of nowhere last year to smack 26 home runs. That’s the good news. When someone says, “That’s the good news”, you know there is bad news coming. The bad news is that he hit 22 of those home runs from Opening Day through July (so only four August-October) and never hit better than .210 in any month from July through the end of the season. Throw in a strikeout rate of close to 40% (37.2%) and I'm not expecting a huge season from Davidson this year. Seems to me like pitchers may have caught up to the slugger…

The White Sox may decide to use a platoon at third and give Yolmer Sanchez some appearances against righties. Sanchez is much better facing righties, while Davidson tackles lefties a bit better, so it makes sense. Sanchez doesn't really offer any significant power or speed, so you can safely ignore him in standard sized leagues.

Yes, Yoan Moncada has dreamy eyes, but I won't get seducd into thinking he's a top ten fantasy second baseman...yet.

White Sox second baseman, Yoan Moncada has all the tools to be a future first round pick in fantasy leagues. However, he’s still trying to put those tools together, so I’m not sure he’s ready to make that leap in year two. He struggled to make contact in both the Minors and in his 54 games in Chicago, and his strikeout rate exceeded 30% in 2017. There is a debate about whether there is a sophomore slump in baseball and with as good as Major League pitching is and how they can make adjustments once they see what a batter can do, I think there is some validity to it. If that’s the case, this could be a learning year for the future superstar and has me leaning towards letting someone else take him. If you like upside, he has a power/speed combination that has fantasy owners salivating. However, if you're risk-adverse, you might want to wait another year before drafting Moncada as he's currently the tenth second baseman off the board on Fantrax.

Shortstop Tim Anderson was a first round pick for the White Sox back in 2013 and hopes are that he will be their shortstop for years to come. He’s entering his third season and I like where he’s heading. As pitchers made adjustments to him early in the season, he only hit .240 before the All-Star break, but then he made some adjustments of his own and hit .276 in the second half. He hit 17 home runs and 15 steals in 2017 and has the potential to be a 20-20 guy. Anderson is a borderline top 12 fantasy shortstop, and is a guy I’m targeting in 2018.

This season, I can see myself waiting on drafting catcher, partly because I'm a huge fan of Welington Castillo. Last season Castillo hit .282 and smacked 20 home runs for the Orioles, and was subsequently picked up by the White Sox this offseason. His batting average is very good for the catcher position and when you throw in the power, he is a catcher I'm definitely targeting this year. He is currently being drafted as the tenth catcher off the board on Fantrax, and personally, I would put him two or three spots higher. 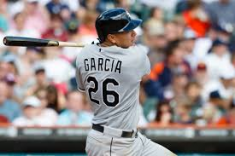 If you think Avisail Garcia can repeat his performance from last year, I think I should introduce you to my friend, Betty Ford.

Avisail Garcia was quite the story in 2017. In his first two season with significant at bats for the White Sox, Garcia's batting average was .257 and .245. Then last year, Garcia hit an amazing .330, which was third in the Majors behind only Jose Altuve and Charlie Blackmon. Can he do that again this year? Hell no he can't. Garcia was aided by an astronomical BABIP of .392, and I honestly wouldn't be surprised if we saw a 40-50 point dip in his batting average in 2018. The good part is his ADP hasn't skyrocketed, as he's currently being drafted as a OF4 on Fantrax. It's in the ballpark, but I still think it's a little too rich for my taste.

With Garcia in right field, the White Sox could choose to play Leury Garcia or Charlie Tilson in center, and Nick Delmonico in left. Garcia doesn't offer much from a fantasy perspective and Tilson is coming back from missing 2017 with a stress fracture in his foot. He could be a good source of steals, but returning from a foot injury, while potentially sharing time with Garcia doesn't lead me to think he will be a major factor in 2018. Delmonico could hit 15-20 home runs this season, but he won't contribute enough in other categories to put him in draft consideration.

As of early February, it appears that the White Sox may trot out James Shields to be their starter on Opening Day. That's laughable. Shields will likely dish up an ERA over 5, a WHIP near 1.5 and not help you in strikeouts either. Unless you are out to tank your fantasy season like the Miami Marlins are doing, you shouldn't even let James Shields sniff your draft board.

In their on-going rebuild, the White Sox shipped Adam Eaton to the Washington Nationals before last season and brought in a couple promising young arms in Lucas Giolito and Reynaldo Lopez. Giolito was at one time the top prospect in the Nat's farm system, but has yet to live up to the hype. I tracked his performance last season in my weekly prospect updates (that you will be able to find on this site again this season) and the dude is straight up unpredictable. He can throw seven shut out innings on Monday, then give up seven runs and walk four in his next game on Saturday. He scares the hell out as far as his fantasy potential for 2018, so I will be passing on him in standard sized leagues. Reynaldo Lopez may be a little more stable in 2018, but I'm not sure I'm ready to draft him this year either. He will likely strikeout a few more batters than Giolito, but I don't think he will offer enough to make him more than a fantasy streaming option this season.

He may start off the season on the DL, but I love Rodon's outlook for the second half of 2018.

The pitcher I feel best about on the White Sox roster, unfortunately will likely begin the season on the DL, and that's Carlos Rodon. Rodon has a procedure done on his shoulder in September to deal with bursitis and that procedure typically has a six to eight month recovery. That would put his estimated time table for return sometime in April or May. However, Rodon has some nasty stuff when he's healthy. He's got a 94 MPH fast ball, a plus-plus slider to go along with a sinker and changeup. He has struck out over a batter an inning in his short career in Chicago and will be the White Sox's ace of the future, in my opinion. The shoulder injury does scare me, and I wouldn't draft him if you are in a league with a shallow bench or no DL spots, but he has the most upside of any pitcher on this staff and I can see myself trying to get him on my roster somehow.

It appears as if there will be a competition for closer duties in Chicago. Nate Jones and Joakim Soria will likely battle it out, but I don't see much good coming out of this. If one of them wins outright, I'm not sure I trust either more than a RP3. This could also end in a time-share situation which would reduce their value even more. You can do better and I would avoid both on draft day.