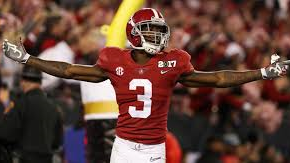 It used to be that it took rookie wide receivers three years to turn into legitimate fantasy football producers. Those days are long gone and replaced with the expectations that receivers should produce immediately. Is it fair of us to expect that of the young pass catchers? Probably not, but NFL teams aren't drafting these guys in the first few rounds to sit their asses on the bench.

In this year's NFL Draft, we didn't see a wide receiver selected until the 24th overall pick, and only two taken in the first round. The second round saw six pass catchers go off the board, but this class seems to lack the super stud receiver that we have seen in some previous years. That doesn't mean that we shouldn't expect some of them to be fantasy relevant in 2018. It just means that we need to dig a little deeper into their skill sets and possibly temper expectations in year one. So let's get to digging' and see what we can find!

Atlanta finally has another threat to take some pressure off Julio Jones, as they selected Calvin Ridley in the first round of the draft. Nothing against Mohamed Sanu, but he wasn't necessarily a guy that defenses had to game plan against. Hopefully Calvin Ridley can be that guy.

Ridley is 6'1", weighs 190 pounds and runs a 4.43 40 yard dash. He's one of the best downfield threats in this incoming crop of rookie receivers, which is evidenced by averaging 45.1 yards per catch on deep passes (per Pro Football Focus), which was good for sixth best among eligible receivers. He has been prone to drops and is entering the NFL at 23 years of age, but Atlanta is a very efficient passing team who was eighth in the NFL in pass yards per game last season. The opportunity is there for the mature receiver to hit the ground running in year one.

DJ Moore should be a good fit for the Carolina offense.

The Panthers started revamping their offense last season and that continued this year as they selected DJ Moore with their first round pick in this year's NFL Draft. At 5'11" and 215 pounds, Moore is a nice compliment to the 6'3" Devin Funchess. He is a polished route runner who can operate both out of the slot or on the perimeter, and with Funchess being a big target, and Torrey Smith as their field stretcher, DJ Moore could be in for a nice workload in year one.

I don't want to compare him to the former Panther Steve Smith, but Moore has the speed and toughness which reminds me a bit of the former Carolina tough guy. Moore excels after the catch as he turns upfield quickly and has a knack for breaking tackles. Carolina is still a "rush-first" team as they finished third last season in rush attempts per game, but with the selections of Christian McAffrey and Curtis Samuel last year, to go with Moore this year, I think Carolina is trying to shape this team into one that can pass more so they can compete with the likes of New Orleans and Atlanta.

I'm going to preface this by saying that I have Anthony Miller ranked as my third best wide receiver among rookies this year, but that is if you are playing in PPR leagues, and I would drop him down a spot or two in non-PPR leagues. The Bears have added outside threat Allen Robinson this offseason, as well as gadget player extraordinaire Taylor Gabriel, so while Miller is capable of playing both inside and out, I expect him to see a lot of work out of the slot this year. He is great at forcing missed tackles and led the nation in yards coming from the screen pass last year with 288. I expect to see Mitchell Trubisky take a step forward in year two and Anthony Miller can become a nice safety valve for the young quarterback for years to come.

James Washington is a big guy known for the big play and should get some looks from Big Ben in year one.

Whereas Anthony Miller may be more of a possession receiver, Pittsburgh's second round selection of James Washington is the exact opposite. Washington led all receivers in college football in yards coming from deep passes (815), as well as touchdowns coming from the deep ball (8) and he's a big play waiting to happen. Ben Roethlisberger is one of the best in the league at delivering the deep ball and I can see the two of them connecting much more frequently than he did with castoff Martavis Bryant. He doesn't hold quite the value in PPR leagues, but I think Washington can become a fantasy asset immediately and landed in the perfect spot to utilize his talents.

Best of the Rest

DJ Chark, Jacksonville Jaguars. Second round pick DJ Chark runs a 4.34 40 and should become a very solid deep field threat for the Jaguars.

Christian Kirk, Arizona Cardinals. While I love the talents of second round pick Christian Kirk, I am a bit concerned about his role. He ran 95% of his routes in college out of the slot, and with Larry Fitzgerald already occupying that spot, there may be a learning curve as he adjusts to a new position.

Courtland Sutton, Denver Broncos. Courland Sutton has great size at 6'4", 214 pounds and has a great catch radius, but he is not the most polished route runner and lands in Denver where he has to compete with Demaryius Thomas and Emmanuel Sanders for targets. While I love his long term outlook, I think it could be tough sledding for him in 2018

Tre'Quan Smith, New Orleans Saints. Third round selection Tre'Quan Smith should be a nice downfield threat for the Saints

Michael Gallup, Dallas Cowboys. He may not be Dez Bryant, but Michael Gallup is 6'1", 200 pounds, has good hands and very adept at making tacklers miss. With very few legitimate receiving weapons, Gallup could produce from day one.