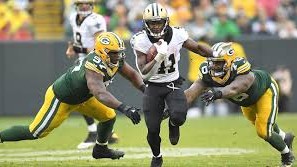 Running back is by far the most difficult position in fantasy football this season. Committees, injuries, rookies, among other factors have made it really hard to keep two or three viable guys on your roster. Therefore, taking a guy in the first three or four rounds that totally busts out will make it really hard to come back from. We’ve got you here at Fighting Chance Fantasy and give you guys to really think twice about before pulling the trigger on Draft Day!

I worry about a running back that is so dependent on catching passes. Sure, McCaffrey is great at it, and could catch 80 passes a year. We’ve had guys like that in fantasy football before, and we will have many more like them. However, how many of them were ever drafted in the second round? Because that’s where you have to draft McCaffrey. And in some cases the early second round.

I know he was a high draft pick, and I know coaches have said they want him to shoulder a bigger load this year. However, if that was the case I’m not sure they would have brought in someone like C.J. Anderson to also compete at the position. Anderson is a great runner, and easily could get 15 carries a game. McCaffrey averaged just over seven carries a game last year, and I have a hard time believing it will get past ten this year. Or even if it does, can his body hold up to ten carries and all of the catches he will get. I like McCaffrey as a player but I think he has a high chance of being a bust for his current draft position.

Out of all the backfields in the NFL, I think the one that I want to stay away from the most in the one in Indianapolis. There are many that think Marlon Mack is going to lead the group in touches. That’s evident by the fact he is going as the RB30 in the consensus ADP on Fantasy Pros. Even if he does lead the team in touches, that’s still too high for me.

If the Colts felt that Mack was a stud, I don’t think they would have spent a fourth-round draft pick on Nyheim Hines and a fifth rounder on Jordan Wilkins. They also have Robert Turbin, that although he will miss the first four games of the season due to a PED suspension, should get some touches and goal line work when he returns. This whole situation reeks of uncertainty and is one I’m staying away from even more than my wife stays away from me.

Jerick McKinnon moved on to San Francisco this season, and people are going gaga over him.  The thing is, what has he really done to garner all this attention?  Last season, he started one game with the Minnesota Vikings.  His rushing average was 3.8 yards (up a whole .4 from the previous season).  Latavius Murray was the better rusher last season.  Matt Asiata put up similar numbers to Jerick McKinnon in 2016.  When you can’t even breakout with guys like that on the roster, that’s someone who has bust-worthy written all over him.  Sure, a change of scenery and a different offense could help him out, but for his price tag, I’m not touching him.  Matt Breida is also in San Francisco which could put a wrench in the McKinnon plans.  I’d be happier with guys who are being taken after McKinnon such as Joe Mixon, Lamar Miller, and Kenyan Drake.

I know, I know, look what he did last year… He did a lot of great things last year, but are they sustainable? His 6.1 yards-pre-carry average is in rarified company. Jamaal Charles is the only back in the last 20 years to hit that number or exceed it. Charles actually averaged 6.4 YPC in 2010, but then after that his top YPC was 5.3 for the rest of his career. I also expect defenses will be more ready for Kamara this go round. Plus once Ingram gets back expect the team to go right to giving him the lions share of the touches since this is most likely his last season with the team and they have nothing to lose by running him into the ground. I also expect the additions of Cameron Meredith and Ben Watson to slightly reduce Kamara’s receptions. I still think he will have a solid season but those drafting him in the first round are drafting him at his ceiling and are bound to be disappointed.

Does anyone else recall Miller being out touched by Alfred freakin’ Blue the final three games of the season?  While everyone is excited for DeShaun Watson to return the fact remains that this offensive line is putrid.  I think Bill O’Brien will fall in love with Watson’s play making ability and forget to run the ball.  Miller provides zero upside to your lineup.  Save that 4th round pick for someone with a much higher ceiling.