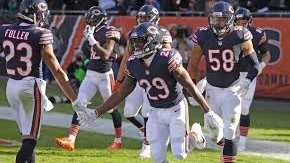 I don’t think there’s any question which position is the most difficult to roster in 2018. Running Back. There are so few bellcow backs and so many committee situations that the days of running back being a slam dunk are over. Now, people are drafting running backs in the first three or four rounds of the draft just because the position thins out so quickly. So finding fantasy gold later in drafts with a sleeper or two is IMPERATIVE if you want to win your leagues. Fighting Chance Fantasy has you covered with guys that you can target after the obvious guys that can help your team get closer to the playoffs and beyond.

Even in his rookie season with John Fox as his head coach, Tarik Cohen still finished as the RB30 in PPR leagues in 2017. That’s why I’m so excited to see what good offensive minds like new head coach Matt Nagy and offensive coordinator Mark Helfrich can do with him. Nagy has gone on record saying he’s “giddy” in trying to find ways to get Cohen the ball. Jordan Howard will still be the early down back in Chicago, but I expect Nagy to find a lot of creative ways to get Cohen the ball, and I wouldn’t be surprised if he approached 70 receptions in 2018. Cohen is currently going as the RB30 on Fantasy Football Calculator, and in PPR leagues, I think that’s a steal.

Want a to draft a teams starting Running Back who is going off the board according to Fantasy Pros ADP in the 7th round?!? Say hello to our old pal Isaiah Crowell.  The Jets aren’t the dumpster fire everyone thinks they are and he’s going to get the majority of early down and goal line work.  Again you are getting a possible 200 carry back in the 7th!  This screams value.  He isn’t a total zero in the passing game either.  He caught 28 balls on 42 targets last season.  You could do MUCH worse than the Crow for a mid round RB.

Hopefully you got him yesterday because his stock is going to continue to climb.  Right now, you can get him for cheap (fantasypros.com has him going off the board as the 33rd running back in PPR).  His price is going to continue to rise with the news that first round draft pick Sony Michel had a knee procedure performed to drain fluid from his knee. Burkhead may be dealing with a minor injury as well, but is set to be able to play in week one.  The news that Burkhead might have a small injury could help keep his price where it is, but time will only tell.   It is risky to start a New England running back since they have a grab bag of running backs, but look for Burkhead to gain a prominent role in the absence of Michel.  If Michel were to have the misfortune of not recovering as quickly as the team would like, Burkhead would be a big pick up.  The Patriots’ unofficial depth chart has Burkhead listed as the starting running back.   At the price you can currently get Burkhead at, he is worth a bench stash.

Blount will most likely only see sporadic playing time unless rookie Kerryon Johnson gets hurt, but in that sporadic playing time will definitely be some goal line carries. When the Lions brought in Matt Patricia to be the new Head Coach, one of the first things he did was bring in Blount. Blount had his best season under Patricia when he posted over 1,100 yards and scored 18 touchdowns in 2016. Johnson is a better all around running back, but he has an upright running style and thin body type that may make it hard for him to stand up to 250 touches in this league. If he gets banged up Blount will be the one called for. His current ADP of 142 overall keeps his cost very low, but as seen in 2016 the rewards can be huge.

Clement struggled to get regular playing time in his rookie season, but when he did touch the ball he was exciting. He only had three games where he had double digit carries, but he did top 50 yards in two of those three. LeGarrette Blount is out of town, and the team didn’t exactly give Jay Ajayi a full workload when he came over from the Dolphins. Sure, Darren Sproles will be back, but he has started to become more fragile as the years pass.

Clement was an undrafted free agent out of college, and the league isn’t littered with success stories taking that route, but he has definitely shown some promise. He’s fast, shifty, and elusive. He is a capable, although not exceptional pass catcher out of the backfield. I do not expect him to step on the field Week 1 and get 20 carries by any stretch, but I do expect him to be part of the offense from the get go and if Ajayi struggles or there is an injury I think Clement could be a very valuable fantasy player in 2018.