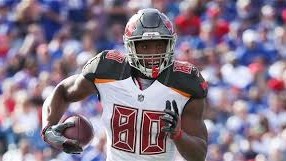 Tight end is a position that people use different strategies on. Some like to draft one of the top three early. Some wait until the middle of the draft, and some don’t barely bother with the position come draft time and stream by matchups all season long. No matter your strategy, a good sleeper can always come in handy whether you are going to wait until the end of the draft, or for that inevitable (and usually minor) Gronk injury. The staff at Fighting Chance gives you their picks for who they like to outperform their ADP at tight end.

I’ve been touting a specific TE sleeper all off season, but I won’t mention his name in this article (cough Watson cough) so I will go in another direction with Eagles TE Dallas Goedert. I know it’s hard to think of Eagles fans cheering for someone named Dallas, but it has been happening all offseason. Goedert had a strong camp and is now having a solid preseason. He has the size and strength to be an excellent red zone threat, something Ertz is not really suited for. Goedert scored 18 touchdowns to go along with 2,400 yards in his last two seasons in college.

The Eagles ran a 12 (1RB 2TE) personnel look 23% of the time last year and I expect that number to be close to the same or maybe even a little higher with both Jeffery and Agholor both injured right now. But even if it remains the same he could easily become a red zone threat with some big plays thrown in. I think he catches 30 balls for maybe 325 – 400 yards but he could also catch 6-7 TDs. He is not even being drafted in most 12 team drafts, but this is a mistake. If he has another good showing in Week 3 people are going to start to believe. And don’t even get me started with what happens if Ertz gets hurt.

I trust Tyler Eifert to stay healthy about as much as I trust my dog unattended in front of a plate of steak. Sure he says he’s fine, but the player always says that. But Head Coach Marvin Lewis said he hoped that Eifert never plays 50 plays in a game. That means, dear reader, that even if by some miracle Eifert stays healthy, he is still a part time player. That leaves lots of snaps for Kroft who had a pretty decent year with 42 catches and 7 touchdowns. If Kroft can get the catches up to 60 and keep the touchdowns the same he will MASSACRE his draft value. Streamers, or people waiting until the end for your tight end, this is the guy for you!

On August 9th’s preseason game, David Njoku had two catches for 46 yards and two touchdowns.  This was an impressive showing for the second year tight end.  Not only did he catch those two touchdowns, but they came from two different quarterbacks.  Both Tyrod Taylor and Baker Mayfield found Njoku for the scores.  This means that both quarterbacks feel comfortable throwing to the tight end, and he can work well with whoever is starting under center.

There are plenty of receiving options on the Browns, but Corey Coleman was just sent to the Buffalo Bills, Josh Gordon has had off the field issues and is currently taking a break from being around the team, and Antonio Callaway could find himself in legal trouble.  This opens up some opportunities for Njoku.  In 2017, he had four touchdowns and was also targeted 60 times (catching 32 receptions).  Look for those numbers to increase this year with better quarterback play.  Njoku is a sneaky sleeper you can get in the later rounds of your draft.

Every fantasy site will tell you the same old, same old.  Burton, Kittle, Blah, Blah, Blah my Mom knows about those guys.  You know who my Mother doesn't know?  Anyone not named Larry Fitzgerald lining up outside for Arizona.  Enter Ricky Seals-Jones.  This guy caught a whole 12 balls last season.  TWELVE.  You want to talk about a guy your league mates will be way off at the draft, it's a dude with 12 total catches.  He's available in the late double digit rounds and can be paired with another upside play like Eric Ebron or Ben Watson to stream the position.  If you want to see how the Cardinals view him this year just check out his usage so far in preseason.  Through two games RSJ has played 82% of first team snaps.  Both Sam Bradford and Josh Rosen excel at short throws over the middle of the field.  RSJ will eat in the short to intermediate area.

One thing that started getting me amped up for a breakout season for OJ Howard was a tweet by the great Brad Evans from Yahoo (@YahooNoise) where he stated, “OJ Howard finished first or second in yards per target, yards per route, target separation and fantasy points per route in 2017”. That’s berry, berry nice. Despite playing in only 13 games and despite seeing only 39 targets, Howard finished as the TE21 in PPR leagues in 2017. The dude is a stud when he gets the opportunity. Yes, Cameron Brate is still there to vulture some targets, but I like to bet on talent, and I will bet the farm that he outperforms his ADP (TE15) and if given the opportunity, this guys has the skills to be a top five or six fantasy tight end.