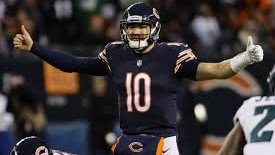 Quarterback is the position that scores the most fantasy points, but is also one we tend to wait on. It is crucial to the success of your team that you pick a quarterback that is going to give you consistent points from week to week. The following aren't guys that you are likely to pick as your weekly starting quarterback but could easily outperform their draft position.

In my opinion, Mitchell Trubisky is being criminally underrated in 2019. Last season he threw for over 3,200 yards and 24 touchdowns in only 14 games. That allowed him to finish as the QB15 in standard league scoring and QB11 in fantasy points per game among quarterbacks. In year number two of Matt Nagy’s offense, the Bears have a good stable of weapons with Allen Robinson, Anthony Miller, Trey Burton, and Tarik Cohen, and are also without former lead back Jordan Howard, so they should rely heavily on the third-year quarterback. Throw in the fact that he averaged 30.1 rush yards per game in 2018 and you have the makings of a fantasy breakout candidate. With an ADP of QB21 on Fantasy Football Calculator, make sure to target Trubisky late in drafts this season.

First and foremost, if Tony Romo has a good feeling about you as a quarterback, I’m automatically going to be a fan. Sam Darnold is one of those super late-round quarterbacks that I’ll be targeting in my drafts this season. Last year, the third overall pick in the 2018 draft had a great finish to his rookie year. This season, he has a few new weapons in guys such as Jamison Crowder and Le'veon Bell. Not only that, but his chemistry with Robby Anderson seems to be growing on the daily. You’re basically getting Darnold for free, so he’s worth a deep dive. In two-quarterback leagues, he is ideal for your second guy.

Similar to my analysis of John Brown, Josh Allen has a huge arm and he has two receivers that he cannot overthrow in John Brown and Robert Foster.  Allen's completion percentage was very low last year and he ran a lot, but that can be attributed to the fact that he was a rookie and the poor supporting cast around him.  The Bills improved their offensive line in the offseason which should give Allen more time to throw and utilize his speedy targets.  With an ADP of 260, I will be drafting Allen a lot this year, and he will be my target if there's a run on QB's in the draft and I miss out on it.

We’re talking Josh Allen, Lamar Jackson, or Kyler Murray.  Anyone you can get late and who will run!  Jackson is projected by some to rush for 1000 yards.  Allen has MUCH better weapons than last year.  Murray is the triggerman in a 4 wide offense.  These guys could score you 10 points a week with their legs as a floor.  That’s on top of the passing points!  You don’t need to spend a single digit round pick on a QB and are locking up top 12 upside.  Get yourself a running QB.

I can’t believe I have to say this but here we are. This dude is the 18th QB off the board according to Fantasy Football Calculator, 20th on Fantasy Alarm, and 21st according to Fantasy Pros. His 29 touchdowns last season were his fewest since 2013 (minus the Deflategate suspension year), and he hasn’t thrown for under 4,000 yards since 2010 (again minus Deflate year). Sure he lost Gronk and you can say that he doesn’t have “name” receivers, but when has Tom Brady ever had big name receivers other than Randy Moss?? And hell, Gronk has been hurt half the time anyway. Brady is as consistent as they come and somehow is being drafted as a mid to LOW QB2. I don’t get it. He just got a two year extension which means he isn’t thinking about retiring so get him everywhere you can as your QB2 and he could very well be your every week starter in 2019.

Heading into 2018 there was a lot of hype that Garoppolo would take the NFL by storm and continue his 2017 undefeated seven game streak. However, in the third game of the season he tore his ACL and was out the rest of the year. During those three games he only put up 718 yards, 5 touchdowns with 3 interceptions which left much to be desired from a fantasy perspective.  Now, entering the 2019 season he is hoping to get back to his 2017 form.   Currently being drafted as the QB19 in the 12th round Jimmy could easily end up a top 10 quarterback. Not only is he the quarterback for a Kyle Shanahan offense, the 49ers have surrounded Garoppolo with a phenomenal set of pass catchers led by star tight end George Kittle and a young wide receiving corps of Dante Pettis, Deebo Samuel, Jaylen Hurd, Trent Taylor, and veteran Marquise Goodwin. In addition, the 49ers have four very capable pass catching running backs in Tevin Coleman, Matt Breida, Kyle Juszczyk, and Jerick Mckinnon. Should the 49ers take the offensive step forward that many are predicting, Jimmy Garoppolo will be a fantastic value in the later rounds of your draft.

You like that? As the 20th QB off the board per Fantasy Football Calculator, Cousins has 2 top-15 receivers at his disposal, an improved offensive line, and improved play over his final 3 games of 2018 with playcaller and OC Kevin Stefanski. While Stefanski was run heavy in a limited sample size to end 2018, HC Mike Zimmer stated he wants to have a balanced offense. Can we bank on that with the persistent health issues of Dalvin Cook? The Vikings didn't extend Kyle Rudolph and draft Irv Smith Jr. to run the ball a ton. Cousins flies under the radar without giant spike scoring weeks in fantasy (6 games of 20+ points, only 1 game under 10 fantasy points) so that consistency should count for something. Is he a stud option at quarterback? No, but you can bank on steady production and the fact that aside from an injury, he's pretty bust-proof.. His last 4 fantasy finishes? 13th, 6th, 5th, and 8th. In the 12th round, you can't bear that value.