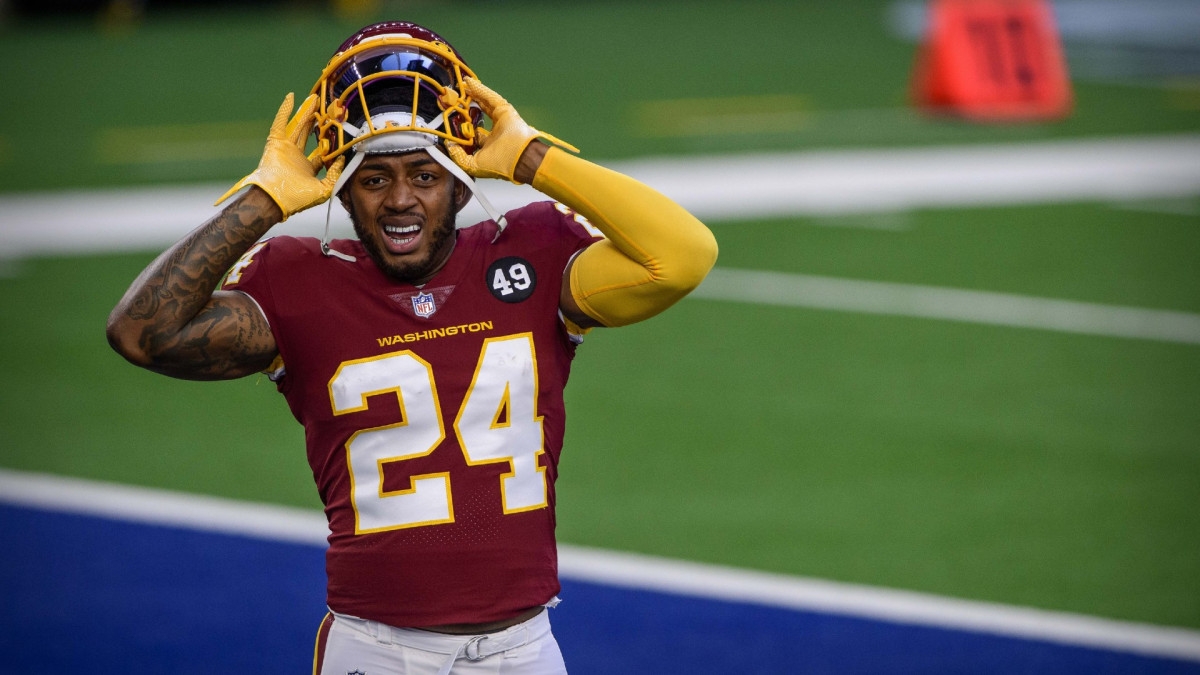 Around this time of year, gyms and fitness centers typically flood with new members, gym-goers, and personal training clients. However, given the 2020 circumstances, life's different. Back when I used to work as a personal trainer, this time of year meant finding clients. We used to have to sell training plans, programs, supplements, and more. Although I dreaded sales, I enjoyed meeting new people and helping them along their journey. As with any passion or work we do, there's learning and growth involved.

I find many parallels with fitness, life, work, and everything in between. With all areas of life, I strive to reflect, grow, and learn from past experiences. I recall following bro-science and fitness ideas that ended up as false notions. A similar process happens with fantasy sports and fantasy football, which leads up to the purpose, which is to reflect on the 2020 fantasy football season.

I used to think a player's target volume mattered, but it does within the context of the target distance. Wide receivers earn targets, and they're more valuable farther down the field. The main point takeaway - consider the average depth of target (aDOT) when looking at targets. Of course, like with any stats, there's no one perfect metric, but consider multiple factors, which leads us to our next point.

The second 2020 fantasy football lesson - consider the whole picture, including opportunity, productivity, efficiency, team context, and more. For each position, I typically start with the opportunity metrics. For quarterbacks, I often look at team pass plays per game and pace of play. As for running backs, I'll look at snap share and opportunity share. Next, I look at Weighted Opportunities, which is a metric that enhances the values of targets.

Then for wide receivers, I'll look at target share, air yards, and air yards share, which then filters into Weighted Opportunity Rating (WOPR) on AirYards.com. WOPR is a metric that can predict future success for wide receivers earning opportunities, which takes into account target share and air yards share. A couple of examples late in the season included Brandon Aiyuk and Nelson Agholor, who ranked highly in WOPR during a relatively productive stretch.

For running backs, it's essential to check the snap counts and snap share. However, consider the snap share based on the game script and what happened in the game. For instance, if a running back played a bunch over the lead running back, maybe consider was it a blowout or figured out what happened. Dwain McFarland also provides some quality analysis each week with his Utilization Report on Pro Football Focus and Establish the Run. I also look at his Utilization Report since he breaks down the usage of players based on situations such as 3rd down, hurry-up offense, and more.

Okay, this one seems obvious, but more and more, it matters for the entire offense and passing weapons. Last year after Ben Roethlisberger's injury, the Steelers' offense went to the...well, you know where. With injuries to Dak Prescott and Joe Burrow in 2020, we also observed the dropoff in production for their respective team's offense. On the positive end, efficient quarterbacks such as Aaron Rodgers, Kirk Cousins, and Ryan Tannehill help their offensive efficiency and pass catchers. A wide receiver's efficiency typically pairs well with their quarterback's efficiency. Although this might sound like, no duh, but a small lesson learned throughout the season. To add to this, instead of thinking a wide receiver may regress in terms of efficiency, we should dig into the efficiency track record for the receiver and quarterback.

Be Patient, Yet React Quickly to Trends

Sometimes in fantasy football, I tend to be too patient. When digging into the underlying metrics, I make educated suggestions of what that might indicate moving forward. However, sometimes the fantasy production may not occur until it's too late in the season, and I've suffered losses in head-to-head matchups. Instead of beating myself up, I attempt to reflect, ask, and think back to whether that was the correct process. I say "attempt" because it's easy to tilt in fantasy sports when the outcomes are outside my control.

I hear this quite a bit from Dwain McFarland, but NFL teams look at data from the past 3-4 games and adjust from there. With that said, it's difficult for players to produce consistently throughout the entire season, but rather, we experience ups and downs. Again, none of this is mindblowing information, but thoughts I've reflected on throughout the season. It reminded me to react quickly to trends I buy into rather than waiting and not reaping the rewards.

Not Aggressively Drafting Players I Want

Be Open to Drafting a Quarterback & Tight End Earlier

I often took the late-round quarterback approach, but I missed out on Kyler Murray and Josh Allen this year. When looking at the top-6 quarterbacks, four out of six quarterbacks rushed for 400 plus yards. After the top-6, there's a drop off of almost 30 fantasy points over the entire season. Patrick Mahomes rushed for 308 yards, but well, he's Mahomes. Aaron Rodgers is the only other quarterback in the top-6 heading into Week 17 that only rushed for 145 yards but proved efficient, especially in the touchdown department with 44 (No. 1) on the season.

Even Deshaun Watson continues to perform as an elite quarterback that I haven't rostered enough. By now, many of us know about targeting quarterbacks with rushing ability. Although I likely won't draft Patrick Mahomes due to his high ADP, I will consider quarterbacks in that QB5 to QB10 range, but closer to the QB5 spot. As much as I want Josh Allen or Kyler Murray in 2021, it's likely their ADP jumps up. With that said, hopefully, I'll target Watson or even Lamar Jackson, who underperformed in 2020.

Both Travis Kelce or Darren Waller separated themselves at the tight end position. We imagine that George Kittle would have ranked highly as well if he hadn't suffered injuries. In PPR scoring, Kelce scored over 60 more total fantasy points at 312.76 than Waller with 251.9 through Week 16. Amongst all flex positions (RB, WR, & TE), Kelce ranked 6th between Stefon Diggs and Derrick Henry in total fantasy points. Heading into Week 17, Waller tied with Justin Jefferson for the 12th spot. That's unreal fantasy production from the top-2 tight ends. Meanwhile, amongst tight ends, T.J. Hockenson scored 169.8 (No. 3), and Robert Tonyan scored 166.8 (No. 4). As we head into 2021, I'm considering drafting one of the big three at tight ends early on, including Kittle in that group.

Three Players, I Whiffed On

Coming into 2020, I labeled Aaron Rodgers a bust. I'll take the loss here and apologize for that advice. A couple of reasons I faded Rodgers included the lack of efficiency and the downward trend in production. However, in 2020, Rodgers proved that he's one of the more efficient quarterbacks. He currently ranks 25th with 34.8 Team Pass Plays Per Game with an 8.1 (No. 3) Yards Per Attempt, +31.1 (No. 2) Production Premium, and 0.65 (No. 1) Fantasy Points Per Dropback. Davante Adams and Rodgers proved that they're a deadly stack in 2020. Oh, this is another 2020 fantasy football reflection - stack players on my redraft teams. Although I'm not sure if this efficiency continues in 2021, there's no doubting the talent and fantasy production. I'll still prioritize the quarterbacks that possess the rushing ability, but Rodgers should rank in that QB1 neighborhood heading into 2021.

Admittedly, the volume of Leonard Fournette drew me to this Jaguars' lead running back role. Unfortunately, I ended up on the Chris Thompson train, which led me to a narrow-minded approach, not considering James Robinson enough. I wrote about James Robinson and Myles Gaskin in the middle of the season since I kept drooling over the fantasy production and advanced stats for both running backs.

Similar to James Robinson, Antonio Gibson looked like another exciting 2020 rookie running back. Gibson held an intriguing NFL Draft Profile with a 122.8 (99th-percentile) Speed Score, 17.4% (24th-percentile) College Dominator Rating, and 12.7% (87th-percentile) College Target Share. At Memphis, they had a loaded running back room with Darrell Henderson, Patrick Taylor Jr., and Tony Pollard. In college, Gibson produced in the rushing and receiving game with his limited touches. I want to highlight his Speed Score that ranked in between Saquon Barkley and Jonathan Taylor, basically showing Gibson came in with similar size-adjusted Speed Scores. Bill Barnwell proposed this metric as a predictor for running back success. Amongst 2020 rookie running backs, Gibson led all rookies with his 122.8 Speed Score. 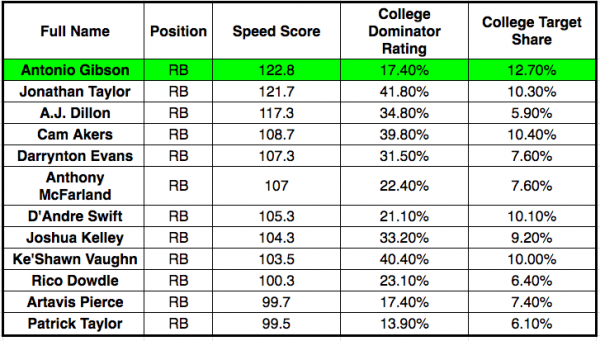