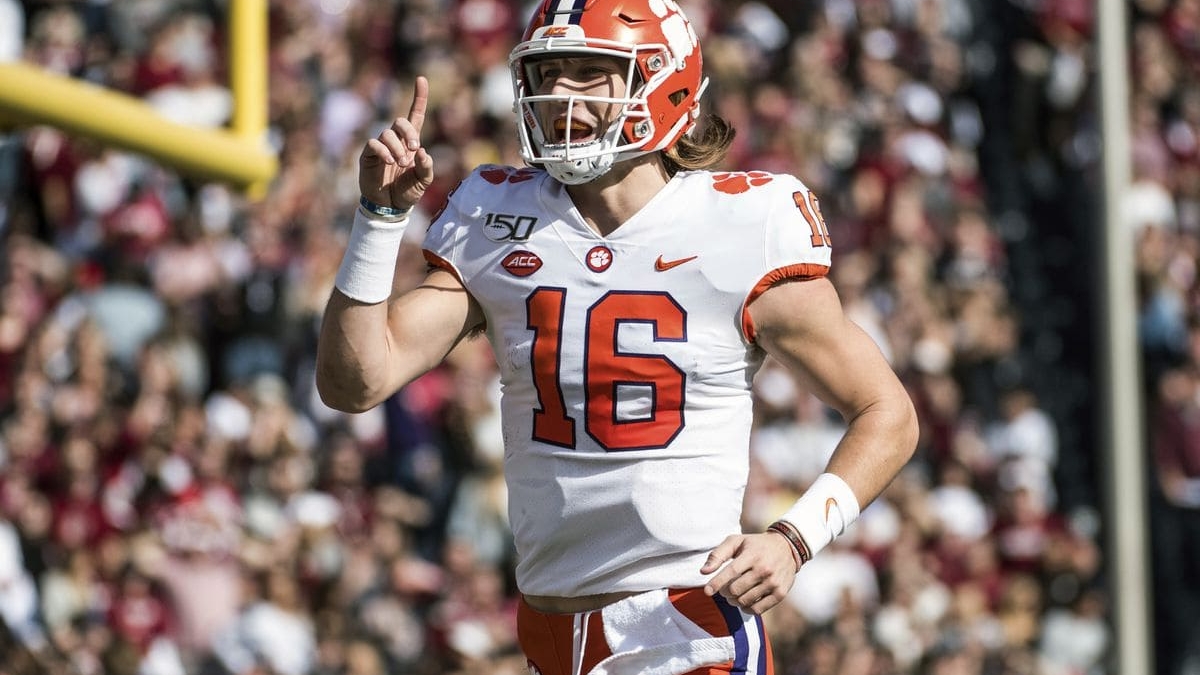 Lawrence is as sure-fire of a prospect as we have ever seen, at least since Andrew Luck. Let’s just hope the Jags don’t leave Lawrence for the wolves like the Colts did with Luck.

Najee Harris has all the physical tools to dominate at the next level. When he runs, he looks like a combination of Nick Chubb and Derrick Henry. That is some high praise, but the scariest part is Harris has serious receiving potential at the next level which is what sets him apart from the guys below him on this list. As a junior at Alabama, Harris had (only) 27 receptions but he went for over 300 yards and 7 touchdowns. While it’s a small sample size, I have seen enough to know it’s there.

Najee jumps off the screen, almost literally, when you watch him play. Not to mention Najee has entered the conversation for biggest quads.

Fields could easily be #2 on this list, and if you have the second overall pick in your draft it will be difficult to pass on the Ohio State QB when you are on the clock. Odds are Lawrence will be selected before you blink, but Fields is a fantastic prospect with the physical traits to take over in today’s NFL. Throwing for 41 touchdowns to just three interceptions in his junior season, Fields has shown just what he can do with the ball in his hands. Fields has also shown his upside running the ball as well with 19 rushing touchdowns in 31 career collegiate games which is something that simply can’t be forgotten in the fantasy realm.

Etienne has been another hot name for quite some time. He surprised many by opting to return to Clemson for one final season rather than entering the 2020 NFL Draft. Etienne is a smaller back, at least compared to Harris (5’9” 210lbs to 6’2” 230lbs) but he is absolutely electric on the field and is made for the modern NFL. One of the biggest issues for Etienne going into the season was his comfortability in the receiving game, but he sure looks comfortable now. He likely won’t get the rushing workload in the NFL that we want to see, similar to Kamara’s situation, but whoever drafts him will definitely utilize him in the passing game. ETN will be an RB1 someday, but for now, he’s my RB2 in this class.

Another North Dakota State quarterback with all the physical tools - 6'4" 226 pounds, and can make every throw - Lance has all the potential to be one of the next elite quarterbacks of the NFL. Trey Lance has been my QB3 since last year and that’s where he stays as of now. He had an excellent 2019 campaign, albeit not the SEC, he threw for 28 touchdowns and zero interceptions. In his lone game in 2020 he had a subpar passing performance (15/30 149 YDS 2 TD 1 INT) but added 15 carries for 143 yards and 2 touchdowns. Again, the rushing upside in fantasy is always something to be considered when selecting your (fantasy) franchise quarterback. When it comes to passing + rushing upside, 2020 Josh Allen is who comes to mind. Lance’s ceiling is sky-high, and he is worth the risk in your 2-QB/SuperFlex leagues. I’m betting on talent with Lance.

It feels bold enough having Pitts at number six, but I am tempted to move him up the list even more. In non-superflex leagues, Pitts is a top 3 fantasy prospect. I’ve been of the mindset that drafting Travis Kelce in the first round is a huge advantage, and the people of Twitter have convinced me Pitts is the next big thing in the thinnest of all positions. We may never get another Travis Kelce, but Pitts may be the next closest thing and there is no advantage like having a TE putting up WR1 numbers week in and week out. It will be interesting to see his measurables and other combine times. Plus, according to Player Profiler, Pitts' “best comparable” is LeBron...

Is having Rashod Bateman at 7th ahead of Chase and Smith a “hot take?” Bateman had a strange 2020, as did all of us. For Bateman, he decided to opt out of the season for COVID reasons (or maybe QB play) then came back, then opted out again after a few games for a final time. He has elite potential at the next level. In 2019, he brought in 60 receptions for 1,219 yards and 11 touchdowns – good for over a third of his teams’ yards and touchdowns through the air. You may think I am crazy to have Bateman as my WR1 but I’m here for it.

Next up is the *consensus* WR1, Ja’Marr Chase. Another astounding WR prospect from LSU, Chase will be the first receiver taken off the board in your league’s rookie drafts, but our drafts are full of wonderful surprises! Although he opted out of the season due to COVID (or maybe QB change), Chase gave us enough to go off in 2019 by going off for nearly 1,800 yards and 20 touchdowns. Even as I write this I want to move him up my list. Chase is going to be a monster in the NFL.

Look, it feels like a crime having Devonta Smith all the way down at 9. He is the first WR to the Heisman in 30 years. Devonta Smith was unstoppable this past season putting up over 1,800 yards and 23 touchdowns. Even though Smith will likely be a top receiver for the next decade, it’s tough to place him over players like Chase, who put up similar numbers at a younger age. With that said, Smith will be the first receiver taken in some drafts, and I can't fault anybody for that.

Our 4th quarterback in the top 10 is Zach Wilson. Wilson has the arm talent to succeed at the next level, and in recent months he has skyrocketed up the draft boards – both in fantasy and in real life. In the right offense he could flourish. He is arguably QB3 and as I do more digging, he could move up my rankings as well. I'd like to see him on the Panthers in Matt Rhule's offense.

Kenneth Gainwell is the reason Antonio Gibson wasn’t getting the touches he deserved. Well, probably. He was highly productive in 2019 for the Memphis Tigers going over 2,000 yards from scrimmage, complemented by 16 touchdowns. He is an energizing RB with a ton of potential at the next level. I like Gainwell's vision, patience, burst, balance, and even strength. He displays all of those skills/assets in the clip below.

There are several deserving players for #12. In 2020, Williams has racked up 1445 yards and 22 touchdowns on just 182 touches. He has the explosive running ability we all want to see from a top tier RB. Quite frankly, with the way the 2022 RB class is shaping up, and with the depth at wide receiver in this ’21 class, I am okay with slightly overpaying in this draft to acquire guys like Javonte Williams, Kenny Gainwell, and Michael Carter.

Let me know who I should have in my top 12 on Twitter @ConnerShears!