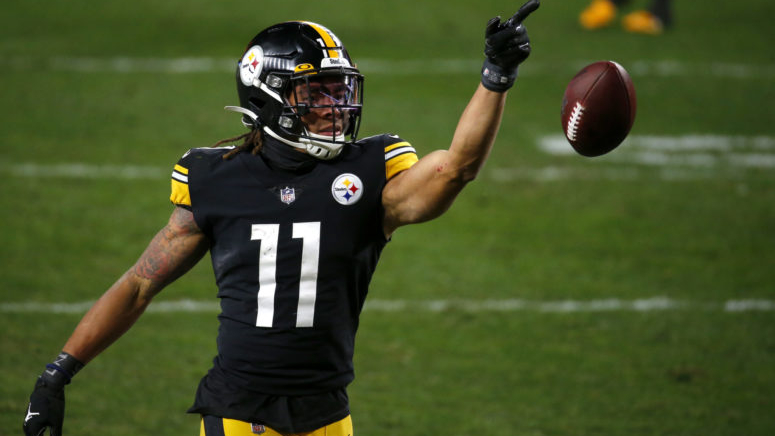 The pool of talented wide receivers in the NFL is so deep that nearly anyone could breakout during any given year. In this article, we’ll look at a few veterans who underperformed in 2020 and are poised to breakout in the 2021 season. I used data gathered from PlayerProfiler, Pro Football Reference, and just my gut feeling (although that could just be last night’s dinner). Let’s get started!

During his two years in the league, Mecole Hardman has failed to live up to the expectations many had for him coming out of the University of Georgia as a second round draft for the Chiefs. His rookie season saw him accumulate a modest 538 yards and six touchdowns, but he stalled in his sophomore campaign with 560 yards and only four touchdowns. He was targeted more in 2020 but was plagued by drops, racking up the 9th-highest drop rate in the league. However, I think that changes this season. Reports from training camp have been glowing regarding his improved route running and improved hands. Sammy Watkins also left in the off-season, leaving Hardman as the clear number two receiver in Kansas City, a team that ranks 7th in pass plays per game. There will be plenty of opportunity on this offense in 2021, and I think Hardman makes the most of it.

Jerry Jeudy dealt with a lot of instability at the quarterback position with the Denver Broncos last season (Kendall Hinton, anyone?), but he still managed to put up 856 receiving yards and three touchdowns. Denver threw Jeudy the ball A LOT, targeting him 113 times over the course of the season. Jeudy only caught 52 receptions, leaving some with questions about his ball-handling skills, but many of these incompletions were a result of poor quarterback play. In fact, according to PFF, he led the league in incompletions due to quarterback error at 28. The Broncos signed Teddy Bridgewater in the offseason, giving Denver some much-needed experience in the quarterback room and Jeudy more stability on the field. I also think that the return of Courtland Sutton benefits Jeudy, as it will prevent double coverage and open up the field.

Much like Jerry Jeudy, Laviska Shenault’s stat line was hampered by poor quarterback play during the 2020 season. During his rookie season, Shenault put up 600 yards on 58 receptions and five touchdowns. He also had a 73.4% catch rate, good for first on the team and 21st in the league. The Jacksonville Jaguars only had 25 passing touchdowns all season, so Shenault found a fair percentage of end zone targets. In 2021, Shenault will play with a new quarterback in Trevor Lawrence and a new coach in Urban Meyer. We all know Lawrence is good, but to put it in perspective, he threw one fewer touchdown in ten games at Clemson than the Jaguars did all season. This offense is going through a massive rebuild and Shenault only looks to benefit from it.

After a respectable rookie campaign, Deebo Samuel suffered from multiple injuries and missed several games in his 2020 season. He ended the year with only 391 yards and one touchdown. However, if you look at Samuel’s production in the games he played and not just the year-end stats, you’ll see why I have him as a breakout candidate. In 2020, he ranked 9th in yards per route run (2.37), 12th in catch rate (75%), and 14th in yards after the catch (8.8/target). The speed, hands, and play-making ability is there, plus he could see an upgrade at quarterback if and when Trey Lance moves into the starting position in San Francisco.

The Buffalo Bills surprised a lot of people last season with their explosive offense, and Gabriel Davis played a huge role on the high-powered squad. In his rookie season, playing behind Stefon Diggs, Cole Beasley, and John Brown, he put up 599 yards on 35 receptions and found the end zone seven times. He ranked 11th in the league in fantasy points per target (2.21) and 7th in yards per reception (17.1) as a rookie! This year, John Brown is gone, and I see Emmanuel Sanders competing more with Cole Beasley for short targets than the deep targets Davis feasts on. Gabe is going to blow up in 2021. 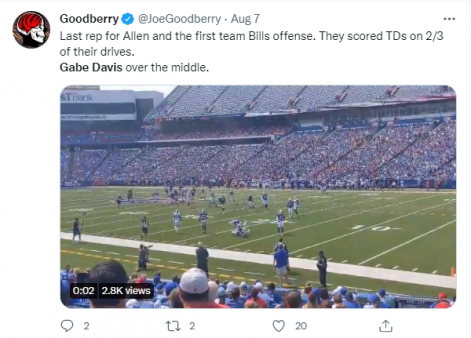 It could be argued that Jakobi Meyers broke out last year. He recorded 739 yards on 53 receptions, but he never made it in the end zone. The lack of touchdowns is why I’m including him in the breakout category. The New England Patriots’ passing game was extremely lackluster in 2020, only putting up 2,890 passing yards all season. Much of that could be attributed to Cam Newton’s bout with COVID-19 and subsequent struggle to return to pre-COVID form. This year, all that seems to be in the rearview. Reports from 2021 training camp have been glowing regarding Meyers’ consistency and rapport with Newton. At his current ADP of WR79 in PPR formats, he’s a great late-round flier prospect with huge upside.

As with Meyers, many would argue that Chase Claypool broke out last season, but I’m including him as an honorable mention. He put up staggering rookie numbers recording 62 receptions for 873 yards and nine touchdowns…whoa. However, this was with Ben Roethlisberger still working his arm back into football shape after requiring surgery due to tearing three flexor tendons off his throwing elbow during the 2019 season. Just think of what Claypool will do with a fully healthy Big Ben back in the lineup! Juju Smith-Schuster has also been largely relegated to a slot role, opening up Claypool for the deep shots. In 2020, he ranked 3rd in the league in the number of deep targets thrown his way, and, that was with Roethlisberger being one of the worst deep ball passers with under 40% accuracy on 58 attempts. Claypool looked GOOD in the Hall of Fame game against the Dallas Cowboys until an awkward landing took him out. I’m looking for him to easily break the 1,000 yard mark this season as long as his quarterback stays healthy. 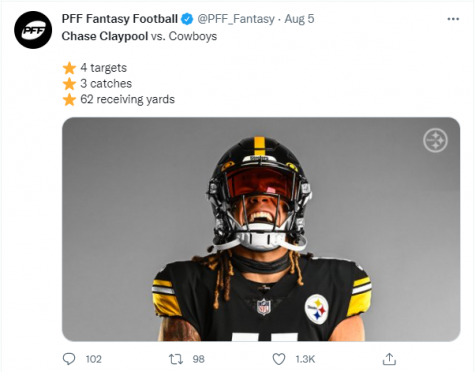