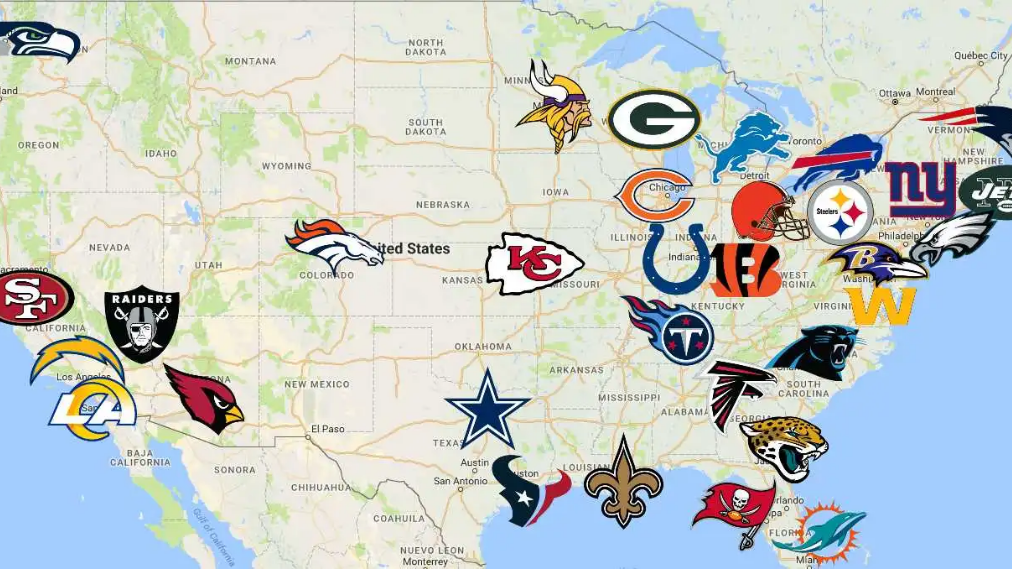 Ahead of the full NFL schedule release on May 12, @SportsballerJ reviewed each NFL team's road opponents and the five international games to calculate the total miles each team will travel during the 2022-2023 season. Each team will do everything possible to limit the amount of travel depending on how their road trips are scheduled. Below is the preview for each NFC team.

Follow along @SportsballerJ all offseason for a complete schedule breakdown and analysis for your favorite team.

The Tampa Bay Buccaneers will travel the most miles of the division (26,820 miles) almost completing a "trip around the world" (29,104 miles). The Buccaneers will travel more than double the miles that the Atlanta Falcons will travel because they host the Seattle Seahawks in an international game in Munich, Germany. The New Orleans Saints will traverse the most time zones than any other team in the division. While all their division rivals are in a different time zone, the Saints will not play a single road game within the Central Time Zone next season, but they are the only team in the division to avoid an international game or two West Coast trips. The Atlanta Falcons and Carolina Panthers will both travel to the West Coast twice next season to face off against the Seattle Seahawks and the Los Angeles Rams with all other road games close to home. 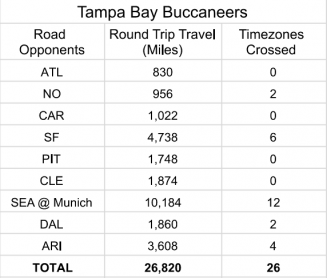 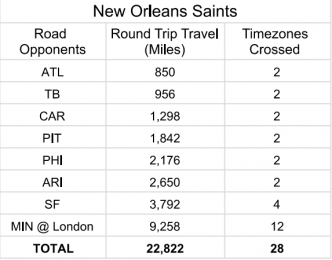 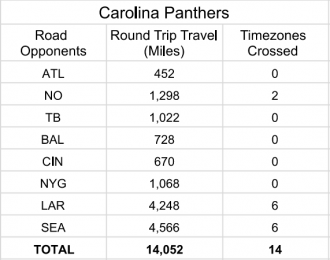 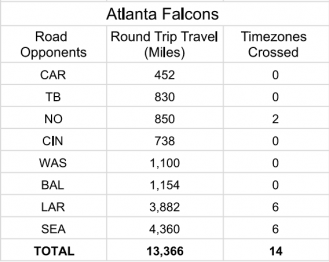 The NFC North teams benefit from their division rivals being very close in proximity to each other: less than 515 miles round trip. Excluding the international games in London for the Minnesota Vikings and the Green Bay Packers, every other road game for all four teams is fairly close to home; only traveling 2 time zones to complete each trip saving the potential for jet lag to impact performance on the field. The Vikings will travel the most miles of the division, the Packers will traverse the most time zones, and the Chicago Bears will travel the least total miles avoiding any road trips greater than 2,000 miles. Even with two international games, the entire NFC North Division will travel fewer miles combined next season than the league-leading Seattle Seahawks (58,204 miles). 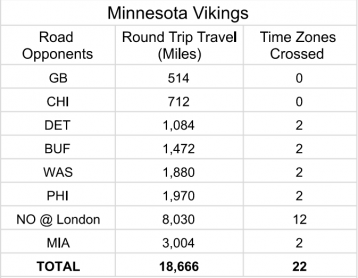 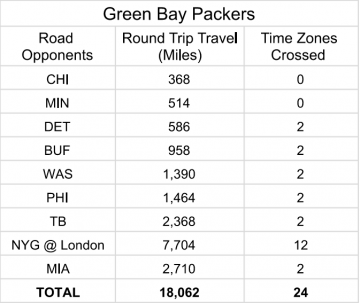 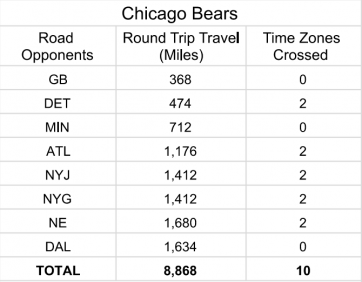 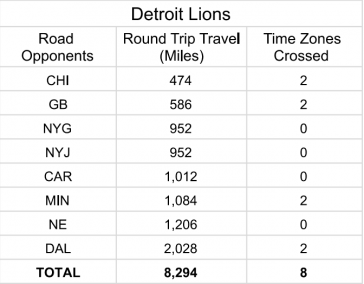 The Seattle Seahawks will travel the most miles of any NFL team this upcoming season. They are scheduled to travel 58,204 total miles across 34 time zones. The distance around the World's equator is 24,901 miles so the Seahawks will fly around the world at least twice. The other three teams within the division will travel roughly 15,000 fewer miles combined than the Seahawks will travel. The San Francisco 49ers will endure the least amount of time zones crossed of the NFC West teams thanks to an international road game against the Arizona Cardinals in Mexico City, but they will travel to the East Coast twice this season which could land them the notorious 10am PST road game time slot. The Arizona Cardinals have the most 'road' games in the division as they will host the 49ers in Mexico City for Monday Night Football on November 21st. The Cardinals beat the 49ers 31-14 in 2005 when the first NFL game was played in the Estadio Azteca in Mexico City. The Los Angeles Rams will travel the least amount of miles of the NFC West teams this year thanks to a 'road' game against the Los Angeles Chargers with whom they share a stadium. The Rams however will travel to the Midwest and East Coast more than their divisional rivals. 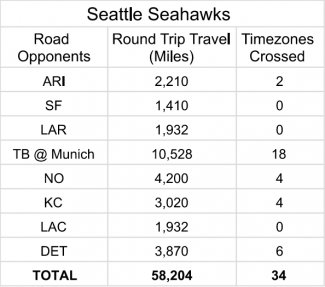 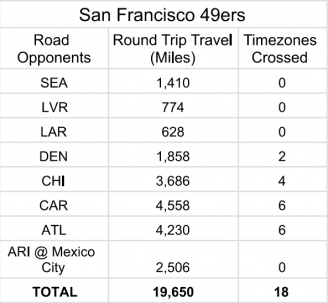 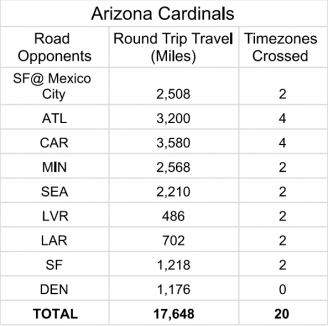 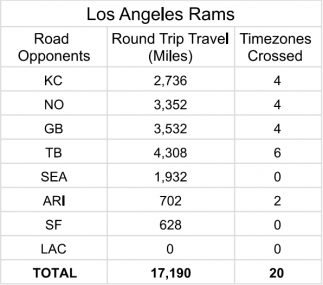 The Philadelphia Eagles will avoid a West Coast trip as their road game against the NFC West is in Arizona against the Cardinals so they will traverse the least number of time zones and miles. The New York Giants will travel to face off against the Green Bay Packers in London, England, and will visit Seattle which will force them to travel the most miles within the division. The Dallas Cowboys do not have a road game closer than 1,200 miles away whereas the Washington Commanders have five road games within that same distance. 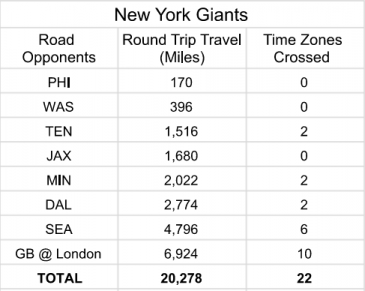 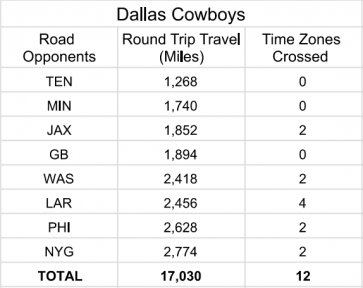 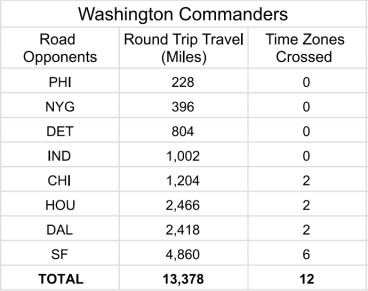 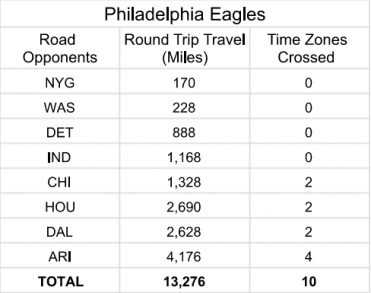