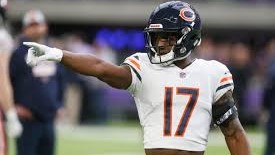 Fantasy football draft season is right on the horizon, and finding those later round values is where you win or lose your season. Sure, everyone gets all excited about the first couple rounds, but the middle to end is where titles are won and lost. The first thing to do before you start your draft is to identify the players to target in Rounds 8-12 where you can do some damage to your league mates. Here are eight players to remember when forming your team.

Philip Rivers, Los Angeles Chargers. Only once since George W. Bush was president did Rivers not throw for 4,000 yards. During that same time span he has never had fewer than 26 touchdowns. Sure, he is aging, but Rivers still is loaded with competitive fire. Just watch him on the sideline if you doubt that last statement. He has two awesome receivers, a great pass catcher out of the backfield in Melvin Gordon, and Hunter Henry returns this season from injury. With all of that, Rivers still isn’t being drafted among the top 12 quarterbacks, but he has a great shot of finishing in that range.

Kirk Cousins, Minnesota Vikings. Last year Cousins was given a huge, completely guaranteed contract which set his expectations at a unattainable level. While he didn’t look great at times last season, at the end of the year he still finished with a career high in touchdowns and the lowest number of interceptions since becoming a starter. Somehow, Cousins is being drafted just inside the top 20 quarterbacks. With arguably two of the top ten receivers in fantasy football, a solid running game, and a great tight end, I don’t see any way that he isn’t as least as good as he was in 2018. He is practically a lock for 28 touchdowns and 4,200 yards and is being disrespected by fantasy drafters right now.

Mark Ingram, Baltimore Ravens. Ingram was a fantasy stud on a pass happy team while he was sharing the backfield with Alvin Kamara. In the offseason he took a free agent deal to join the team that ran the ball the most in the second half of the year in Baltimore. An undrafted free agent was very successful for the Ravens last year, and now a very talented Ingram should be a dream there. He is a workhorse back who can punish a defense and does even better at the end of the game when they are tired. He also showed a great ability to catch the ball out of the backfield as well, which gives him extra value in PPR leagues. Ingram is being drafted around the RB20-RB25, but he has a real chance to finish easily among the top 15.

Peyton Barber, Tampa Bay Buccaneers. Don’t look too hard at Barber, there’s not a lot to see here that will get you excited. However, sometimes fantasy football is more about opportunity than talent. Many are predicting that second year player Ronald Jones will take the starting job from Barber this season, but he looked absolutely lost last year. Barber might not top 1,000 yards, he might not beat his six touchdowns from last year, but he should be the starter in 2019, and even if Jones comes into camp and looks good, Barber will still get his share of work. Late in July he is being drafted around the end of the tenth round, and while he might not be a sexy name, getting a starting running back that late in a draft is something you can’t pass up.

Anthony Miller, Chicago Bears. Miller dealt with a shoulder issue on and off during the season, but still had a fantastic rookie year. He certainly showed a knack for getting open in the end zone with his seven touchdowns in just 33 receptions. Allen Robinson goes into the season as the Bears top receiver, but he hasn’t looked like that star we saw in Jacksonville several years ago. With an offense devised by Matt Nagy, and run by an improving quarterback in Mitch Trubisky, I think that Miller has the chance to be the most productive receiver on the team by season’s end.

Dede Westbrook, Jacksonville Jaguars. Blake Bortles regressed into a tire fire, and the Jags offense struggled mightily in 2018. He threw only 13 touchdowns over the 16 games. The exciting part of this is Westbrook caught five of those 13 touchdowns. While he might not get confused for Tom Brady, the Jaguars did improve their quarterback situation by bringing in Nick Foles. This should bring the offense back to respectability if nothing else. Westbrook is a dynamic talent who has shown flashes of greatness in his first two seasons. He was the leading receiver for the team last year, and I completely expect him to be that again. You can get Westbrook near the end of the eighth round and you would be wise to make the move to get him on your team.

Delanie Walker, Tennessee Titans. Walker broke his ankle in the first game of the season last year, and one of the more consistent threats at the position was lost for the season. The previous four seasons he had at least 100 targets, over 60 catches, and at least 800 yards. Tennessee has brought in more weapons at wide receiver, but honestly I’m not sure the quarterback is capable of making the most of them. Walker is a huge target in the middle of the field, with great hands, and is hard to take down. Even Marcus Mariota can’t miss him! Add to the equation that Walker’s main competition on the team, Jonnu Smith, will miss the first six games on the PUP list, and this makes me love Walker even more. Somehow right now he isn’t being drafted among the top twelve at the position and is a great value.

Kyle Rudolph, Minnesota Vikings. When the Vikings drafted Irv Smith in the second round of the 2019 NFL Draft, many called that the end for Kyle Rudolph. Minnesota than threw a monkey wrench in that by giving Rudolph a fairly lucrative contract extension. Rudolph scored just four touchdowns last season, and two of them came in the same game. He was fairly unplayable for much of 2018, however, they didn’t bring him back and give him a raise for no reason. I am expecting a bounce back from the Vikings passing game, and with that at least six touchdowns and 65 catches for Rudolph.