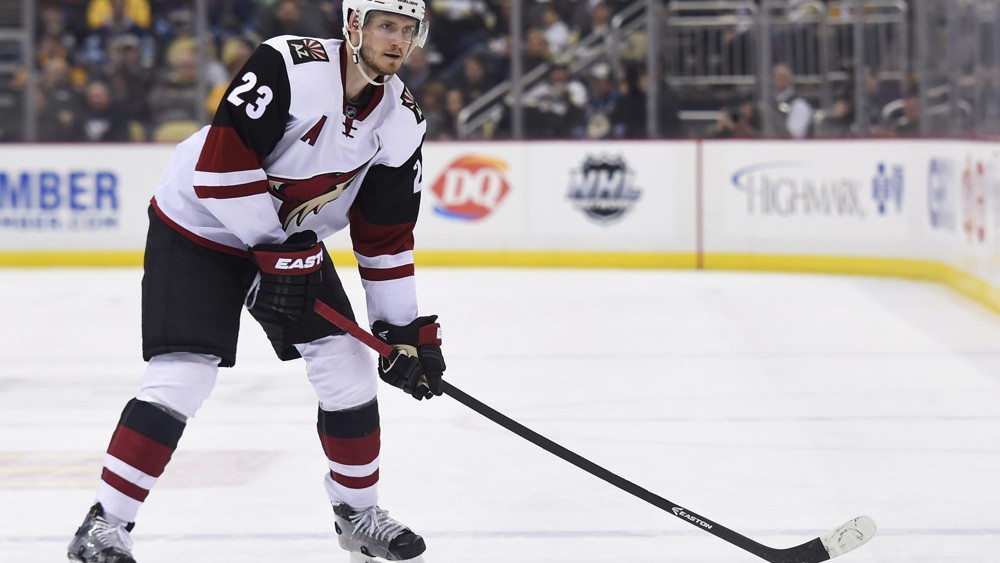 Not that they've had one in the past, but the Arizona Coyotes are struggling to gain an identity in today’s NHL. This Arizona team is flush with super prospects, and I stand by my statement I wrote on Mastersball that Arizona is closer to winning a Stanley Cup than the New York Rangers currently are. This young team has plenty of fantasy relevant players, but with this group, I’m looking more for dynasty success, rather than unearthing an Auston Matthews for this season. Let’s take a look at what players will add depth to your roster, and could win you a league title. However, unless you are drafting in a Dynasty League or a 16 team league or more, these players are pretty fucking useless to us in any smaller leagues, minus the handful of players I list below.

There may be some frustration for Derek Stepan in 2017, but the future is bright for this young team.

Derek Stepan (Center, Age 27): Coming into his prime year, Derek Stepan has a chance to be the leader of the very young, Yotes team, and they will need his leadership. The former Ranger has a slew of very talented youngsters around him and needs a way to harness all of their abilities. Stepan may crack the 50 point plateau, as Radim Vrbata did last season for Arizona, but like I said, this team sucks ass right now, and unless you need waiver fodder or are a homer and think this shit will help you win, stay away from most Coyotes.  Projection: 22g, 31a, 53pts

Oliver Ekman-Larsson (D, Age 26):  If your league uses plus/minus in its scoring system, than you’re fucked using any Coyote, but Ekman Larsson may be worth the draft pick. His point total dropped from 55 to a horrid 39 last year, and had 80 plus less shots on goal, yet I’m expecting a bounce back from the Swede this year as the Coyotes grow and mature. In three or four years, we will be plucking top end talent from this team like we do with Washington right now, but that’s down the road and will not help us in 2017.  Projection: 21g, 27a, 48pts

Antti Raanta (Age 27): Arizona now has one bad ass goalie, and if this team sacks up and plays some fucking defense, Raanta could be lights out. He played in 30 games last season when King Henrik was on the DL, and if your league counts shots faced, Raanta is your man this upcoming season. I’d have zero issues drafting Antti as your number two net minder and certainly a killer third goalie in your rotation. Projection: 29W, 23L, .913 Save%, 3.01GAA

Current rostered players such as Max Domi, Anthony Duclair, and Christian Dvorak will be drafted very late and they could contribute on the deepest of rosters only. They are NHL talent players but have yet to find their groove in the big show. Here are a few of the top end prospects who should get to stay and play with Arizona this season. Keller and Strome are probably the most talented players on this sad sack team that will land another sweet ass lottery pick come seasons end once again. At the end of the draft I’d probably take one of those two studs. They have destroyed at each level and need to be up with the men and take the kids gloves off. Hopefully the menu improves over the next few years for Coyotes fans.

As long as the owner and management are on the same rebuild page, then this is fine and fucking dandy, but they need to see it through and not fire coaches every few years. No matter who is behind the bench, the players need to mature and understand they system. Arizona has a minuscule playoff history and it’d be nice to see them back in the playoffs as the long suffering seven fans that show up for home games deserve something better than the hot, steaming shit sandwiches they have been eating for years.

You can reach me @PolkaPat or @UncensoredPat anytime to discuss anything fantasy, especially pucks.

Up next: Boston Bruins