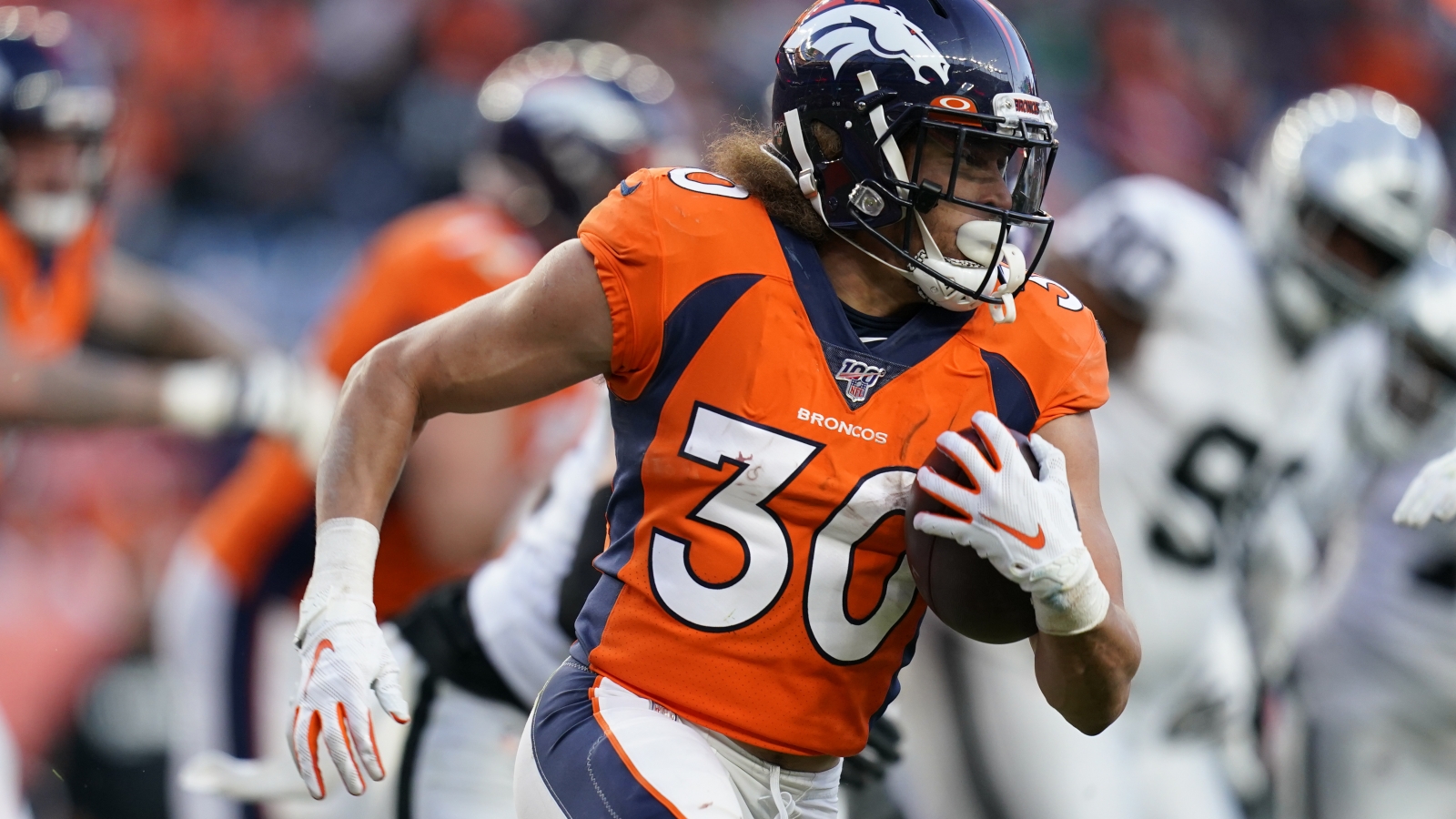 Breaking Down the Broncos Backfield

It’s been a hot topic in recent weeks. Melvin Gordon III or Phillip Lindsay? Who will emerge as the guy you want on your fantasy football team? I will preface this by saying, yes I am Broncos fan with a soft spot for our boy Phil, but I have always been a Melvin Gordon III fan, even during his days with the rival Chargers. I have made a point to trade for Melvin the last few seasons because I believe in his abilities as an NFL running back, and I want him on my fantasy football teams. And let’s not forget about Royce Freeman, whom the Broncos invested a third round selection in just two years ago. Let’s take a dive into this Broncos backfield. 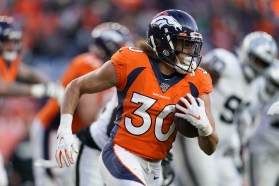 Lindsay is a hometown hero for Broncos fans. To the surprise of many Coloradans, Phil went undrafted in 2018. Lindsay was upset the Broncos didn’t draft him with at least one of their late-round picks they had that year and looked to sign elsewhere. Thanks to his mom, he opted to stay in Denver and sign as an UDFA. Lindsay made his presence known instantly. Already coming off of his second 1k yard season in just as many seasons he has in the league, Lindsay is approaching the 2020 season with a major chip on his shoulder. His career numbers are solid, having rushed for 2,048 yards on 416 carries which comes out to a very respectable 4.9 yards per carry. The most impressive of these stats is the zero fumbles in his two seasons. The problem is when you look into the individual gamelogs. Lindsay had a few head scratchers in 2019. He left us with a wide range of outcomes regardless of the number of times he was handed the rock.

It’s a bit of an anomaly when looking at these stats. We only saw Lindsay break the 100 yard mark twice in 2019. He was handed the ball at least 15 times in eight games during the season. In those eight games he produced 81, 114, 70, 67, 58, 51, 109, and 53 yards and a total of six touchdowns. When you watch him run you can see his abilities in action. He is a fluid runner with a natural vision to find space. Lindsay runs hard, not just for his size. He was tied for 2nd in the league with 29 broken tackles (Henry, Kamara). Lindsay is elusive but runs with power, and often times I forget he is a ‘smaller’ back. While I think his total usage may decrease, I believe we will see his efficiency increase with an improved offensive line (health permitting) and using the signing of Gordon to add fuel to the fire. Recently, Phil has been posting about his work in the receiving game, so it is going to be quite interesting to see how that unfolds. Lindsay seems to be preparing for the year in a similar way that he did we he came into the league as an UDFA. Phil looks fired up and will be playing to prove to the Broncos staff why they should have just paid him instead of FA RB’s. Which leads us to our next topic – Melvin Gordon III. 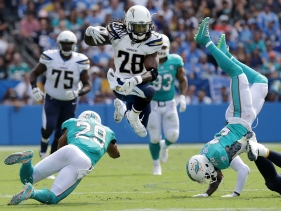 Gordon is entering his sixth season in the NFL and his first with the Broncos. Denver signed Melvin to a two-year, $16 million contract earlier this offseason, so it is fair why so many people envision a 60-40 split between the two backs in favor of Melvin. Like I stated above, I have been a fan of Gordon since his time in San Diego and love his skillset. MG3 is a fantastic pass blocker and a great receiver out of the backfield.  However, he has played in 12 or less games in all but one season, and his inefficiency between the tackles is a bit concerning. Gordon has averaged 3.9 yards per carry or less in four of five seasons with the Chargers, and has only reached 1k yard one time back in 2017. It is difficult to rely on Melvin as your main back for these reasons, regardless of his skills and abilities. Although if Lindsay is going to benefit from an improved o-line, then Gordon should as well.

Gordon’s career average is a respectable 4.0 yards per carry and he makes up for any lack of rushing production with his receiving work. The passing game is where Gordon separates himself from many other NFL backs. Elite pass blocking skills for a running back is not something people typically talk about, especially for fantasy purposes, but for MG3 this is one of his biggest strengths. The Broncos have invested big money on blockers to protect Drew Lock, and I believe this is one of the biggest reasons Denver brought in Gordon. He has natural pass catching abilities that Lindsay somewhat lacked in the previous two seasons. MG3’s receiving numbers dipped last season due to Austin Ekeler’s 92 receptions on 108 targets, but we should see a boost to Melvin’s targets/receptions from last year in Los Angeles to this year in Denver. I expect to see a nice balance of running routes and staying in to block for Gordon on passing downs. 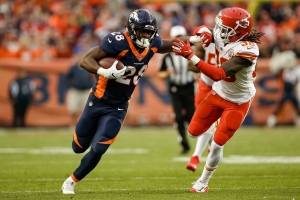 So far in his first two seasons in the NFL, Royce Freeman has yet to emerge as the main guy in the Denver backfield like we all assumed would happen after the Broncos selected him in the third round of the 2018 NFL Draft. As we learn time after time, it doesn’t matter where you get drafted or if you get drafted at all. Pretty much from day one it was clear that Lindsay was more explosive on the field than Freeman. Even though Freeman has been fine and is only entering his third season, Denver felt the need to add someone else to the running back room. This does not bode well for Freeman. Let’s take a quick look at Royce Freeman’s gamelogs from this past season. Royce got the majority of the receiving work out of the Broncos backfield last season, totaling 43 receptions for 256 yards and only one touchdown. This is solid until you realize that all of this is going to Melvin this year. Halfway through the year is when coaches made the choice to give the bulk of the load to Lindsay and I will be surprised if Royce gets many meaningful touches in 2020. 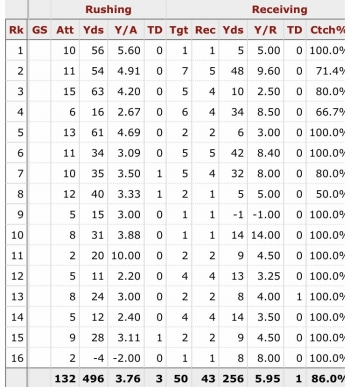 It appears that the Broncos staff has decided to move on from Freeman, and his time in Denver is coming to a close barring any unforeseen circumstances. If Royce gets an opportunity elsewhere he may still hold value in your fantasy league, but until something happens it looks like Freeman will be taking a backseat to the others. I think we will see Freeman sprinkled in here and there, much like we saw with Devontae Booker last year in Denver. It would not be surprising if there is a trade in the near future, but with all of the uncertainties surrounding COVID-19, it wouldn’t hurt to have that depth available throughout the season and Freeman is still a fine running back. Unfortunately for him, I just don’t see where he gets the touches without an injury or illness to the other two.

The biggest question mark for the Broncos backfield is definitely usage. “Who is ‘the guy’ I need to draft?” Although the consensus for usage is somewhere around the 60-40 mark in favor of Melvin Gordon, I envision it to be much closer to 50-50 between Lindsay and Gordon (slight lean to Melvin), with Freeman as a reserve. We are going to see a lot of two back sets that feature both, Lindsay and Gordon, and I am excited to see them utilized on the field simultaneously. Gordon will be the main back in the receiving game with Lindsay handling the majority of the rushing attack.

Here are my 2020 projections for the Denver Broncos running backs.*

This situation was challenging to project since we aren’t sure how they will share the workload. I can see Lindsay breaking the thousand yard mark for the third time in three seasons, but it is more likely he falls short of that milestone due to Gordon’s presence. We saw last year how the Chargers force fed Melvin to re-integrate him into the offense, and I can see Denver doing that as well because of their investment in him. Gordon’s average ADP (FantasyPros) is 34.5 to Lindsay’s 99.3. Based on their current ADP and projections, Lindsay is the better buy for your fantasy team, but Gordon will get his share of opportunities – most notably in the passing game and goal line situations which makes him incredibly valuable. Although Royce Freeman can see the light at the end of the tunnel, injuries happen (and pandemics) so there is a strong possibility that he will get some playing time throughout the year, if there even is an NFL season ahead of us. I believe all three of these halfbacks hold value for your teams, whether it’s dynasty or redraft. It’s just a matter of what you are willing to pay.