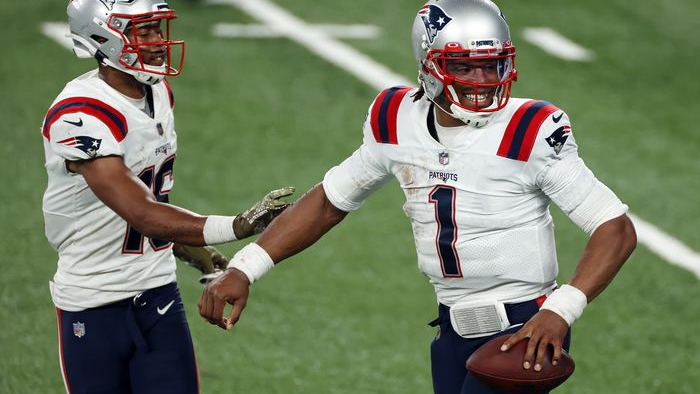 Earlier this week, I stumbled upon the Sleeper HQ (@SleeperHQ) ADP Data and ran into the quarterback data. Cam Newton at QB25 stood out, and then I wanted to see what quarterbacks had an ADP after Newton.

All that said, it leads us to analyze the Patriots offense that brought in several intriguing players in Nelson Agholor, Jonnu Smith, and Hunter Henry. How should we value Cam Newton in 2021? Which running back should we target in the Patriots' backfield? And which pass catchers should we target in fantasy football drafts? We plan to dive into the data and answer those questions.

We'll primarily focus on Cam Newton, but we'll touch on rookie Mac Jones as well. In 2020, Newton averaged 29.8 (No. 31) Team Pass Plays Per Game and a 2.19 (No. 10) Pace of Play. The Patriots often played from behind with a -2.72 (No. 23) Game Script. That indicates the Patriots relied on the running game with a slow Pace of Play yet trailed often. Last season, the Patriots averaged 31.4 (No. 3) Team Run Plays Per Game with those rushing attempts primarily split between Damien Harris and Sony Michel.

There is no denying Newton struggled in the passing game with 2,657 (No. 24) passing yards, eight (No. 34) passing touchdowns (2.2% TD%), and 5.9 (No. 27) Adjusted Yards Per Attempt. All those numbers indicate that Newton wasn't productive or efficient in the passing game. To further back that up, Newton finished with a -11.3 (No. 28) Production Premium, which is an overall efficiency metric on PlayerProfiler.com.

Mac Jones put up quality numbers in 2020 with 4,500 passing yards, 11.2 (97th-percentile) yards per attempt, and 41 passing touchdowns. Although there is much hype surrounding Jones after his final season at Alabama, he will need Newton to struggle or suffer an injury to gain playing time. I believe Newton still has a year or two left in the tank at 32-years of age.

When healthy, Damien Harris earned opportunities primarily in the rushing game yet little in the receiving game. Keep in mind that Harris only played in ten games with a weak 42.2% (No. 46) snap share, and the season-long metrics won't look great. Harris finished 2020 with 47.5% (No. 33) opportunity share, seven (No. 108) targets, and 93.2 (No. 53) Weighted Opportunities. Since Weighted Opportunites values targets and discounts rushing attempts, Harris doesn't rank highly in this metric.

Both Harris and Michel should share carries early on in 2021 while James White earns targets in the receiving game since the Patriots showed they trust White in the passing game. Rookie Rhamondre Stevenson will likely receive some carries and touches in 2021. Stevenson could eat into Michel's touches if he proves worthy. In 2020, Stevenson led the Sooners with 665 rushing yards and seven rushing touchdowns. However, Stevenson's 95.5 (47th-percentile) Speed Score doesn't excite us, but he is a bigger back sitting at 231-pounds. He is just a name to monitor in deeper leagues.

The Patriots have several intriguing pass catchers, and we'll touch on certain ones that stand out. At wide receiver, Nelson Agholor and Jakobi Meyers look interesting with an honorable mention in Kendrick Bourne. We'll avoid N'Keal Harry and keep it simple.

From Week 11-16, Agholor earned a ton of Air Yards and finished 12th with 95.4 fantasy points (15.9 fantasy points per game). Touchdowns fueled some of that production, with three of eight during that stretch. Furthermore, Agholor's 16.7% touchdown rate likely regresses since this was the highest TD rate since 2017 at 12.9%.

Other standout metrics include a 15.5 (No. 5) Average Target Distance and 10.9 (No. 7) Yards Per Target with a +26.3 (No. 6) Production Premium. Since this is a different team and offense, I expect some adjustments from Cam Newton and Agholor. If the passing volume remains low, then Agholor will need to rely on efficiency as he did in 2020.

Tweeting this out again because it’s pretty mind blowing.

However, Meyers lacked efficiency in several metrics, including a -4.1 (No. 61) Production Premium, 9.0 (No. 29) Yards Per Target, and 1.73 (No. 67) fantasy points per target. A couple of glimmers of hope in efficiency involve a 30.1% (No. 9) Dominator Rating and 0.47 (No. 21) fantasy points per route run. Given the unlikelihood for the passing volume to drastically increase, Meyers and Agholor look like the most fantasy-relevant options at receiver for the Patriots.

Both Henry and Smith provided fantasy-relevant weeks in the past as startable top-12 tight ends. Last season, Smith relied on efficiency paired with the efficient Ryan Tannehill. However, Henry relied on opportunity and volume.

Both Henry and Smith could end up as Cam Newton's top targets in the passing game besides Jakobi Meyers (assuming the chemistry remains in 2021). However, don't count out Nelson Agholor coming off an uber-efficient 2020 season. 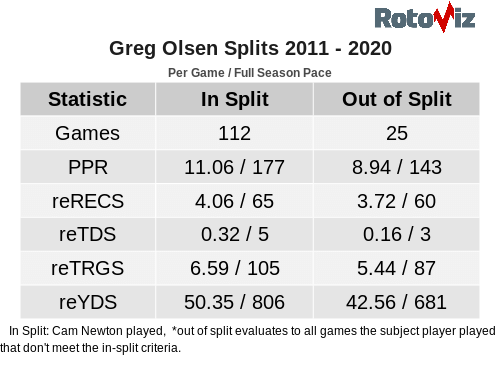 In Carolina, Newton played with Greg Olsen, who averaged 11.06 fantasy points per game with Newton compared to 8.94 fantasy points without Newton per the RotoViz Game Splits App. The gamble involves deciding whether it's Henry or Smith or both? According to Underdog's best-ball ADP, Smith holds a 147.5 ADP before Henry at 161. Both look like viable options, with Henry probably having more value in PPR leagues and Smith projecting better in non-PPR.

As we wrap up the pass-catchers and head to our summary, let's leave you with this final nugget from the top receivers that Cam Newton played alongside in 2017, 2018, and 2020. We're throwing out 2019 since Newton only played two games due to injuries. 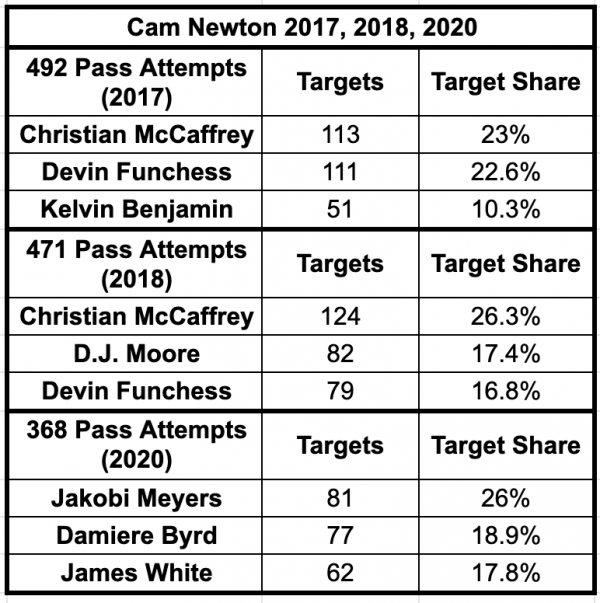 The table above shows the top-3 pass-catchers that played with Newton in 2017, 2018, and 2020. We also highlight the 100+ decrease in pass attempts with the Patriots last season. Unfortunately, there is no Christian McCaffrey-like talent on the Patriots, but that could indicate James White has fantasy relevancy for a 15th straight season (sarcasm included).