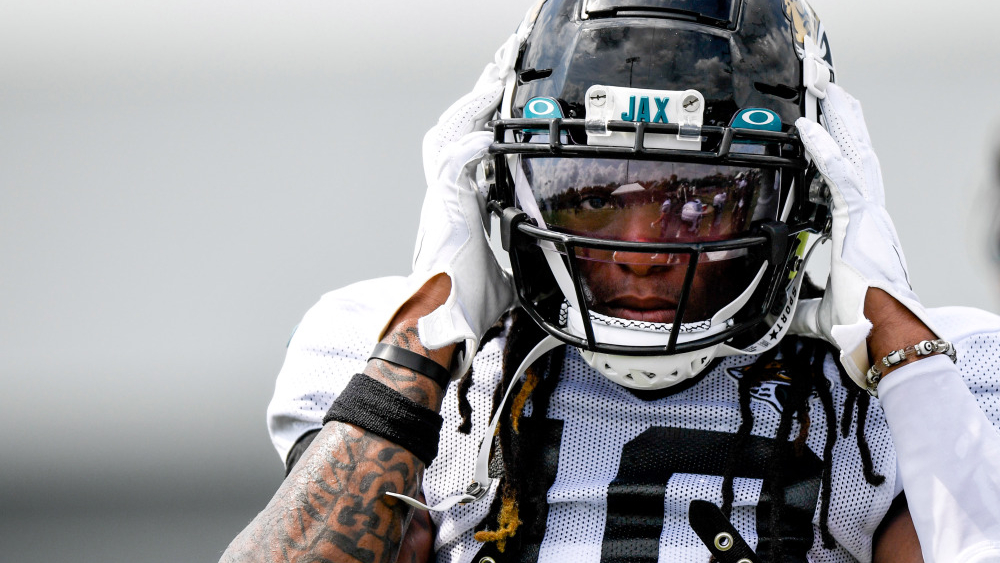 You hear it at every draft, right?

As funny and lighthearted as these moments are, should you be taking notes for future trade partners?

Absolutely. How can we take advantage of these moments to gain an edge over the rest of the league?

Say you’re in a fantasy draft with mostly Cowboys fans and when you took CeeDee Lamb the entire room moaned or the comments blew up. “Hey man, that was a great pick.”

Maybe. Maybe not. But what’s more predictable is you just drafted THEIR GUY.

During the draft season, some players carry a little more helium for various reasons. It could vary between legit, valid reasoning to simply the competitors liked what color jersey they wear.

The idea is to identify those opportunities and upgrade your roster. Maybe someone is higher on a sleeper where you think he’s a JAG (Just Another Guy).

Here are some interesting buy-low and sell-high candidates you can target before that helium leaks out and they come back down to earth or go get your guys you missed in the draft.

KYLE PITTS: One player I’ve been constantly targeting before the opening weekend is Pitts. I’ve been successful in acquiring the polarizing rookie TE in 2-for1 deals. 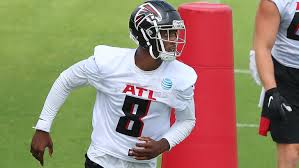 In one league I drafted Lamb and his COVID-19 destination allowed me to put him on IR. This gave me the flexibility to pick up Marquez Callaway off waivers and I promptly shopped him to the team who drafted Pitts. 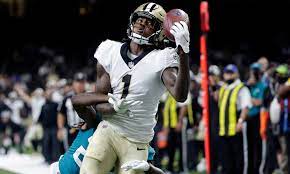 Marquez Callaway has burst onto the fantasy scene.

I included Noah Fant in the deal and it was accepted within the hour. Take full advantage of competitors who are wary of starting a rookie TE because Pitts has the potential to be the new cheat code at the position.

LAVISKA SHENAULT: One theme in every draft and best ball I’ve entered is everyone is off the 2021 Jaguars. 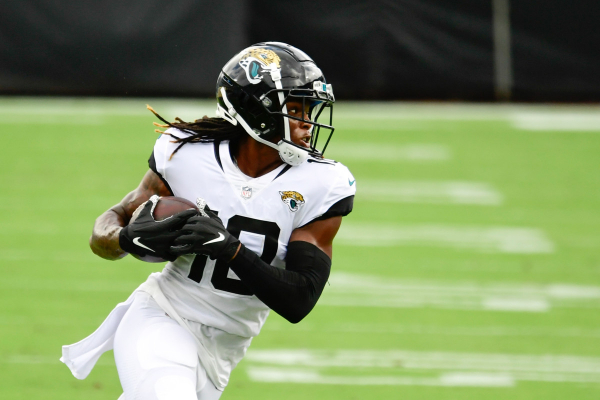 Other than James Robinson, every skill position player slides way past their ADP and it seems people were reluctant to take chances on Shenault, Marvin Jones, or Trevor Lawrence.

In the NFL Draft, the Jaguars spent first-round draft capital on Travis Etienne. I believe this was a tip of Meyer’s hand as he planned on using the speedy back in a Percy Harvin-type hybrid role.

Unfortunately for Meyer, he saw his guy suffer a foot injury and will miss the rest of the 2021 season. The Jaguars are now forced to pivot and Shenault could be next in line for a hybrid role which could give him a nice rushing floor and be the red zone option when Jacksonville gets down to the scoring position.

It doesn’t take much to acquire a guy like Shenault as other competitors will be happy to wash their hands of anyone in Jacksonville. Plus, the entire community is convinced Robinson will be the benefactor of Etienne’s injury.

That’s not a guarantee whatsoever so pounce before it’s too late.

RAHEEM MOSTERT: Mostert is a guy I’ve had success acquiring simply due to the fact the fantasy community believes Trey Sermon is the preferred back in San Francisco. Granted, Mostert has had a tough time staying healthy but use this to your advantage in your negotiations. 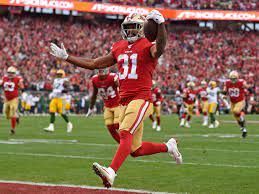 Which San Francisco Running Back will emerge in 2021?

I’m willing to roll the dice on Mostert’s speed especially when paired with Trey Lance on sprint options. The duo has the potential to be the fastest we’ve ever seen with Kyle Shanahan’s schemes and play-calling ability.

To be honest I have a ton of Mostert because he slid down draft boards. But where I didn’t draft him I sent out offers and you’ll be surprised how little you have to give up for a guy who is brewing to have a career year on the NFL’s best run game. Sign. Me. Up.

CEEDEE LAMB: Thank Fantasy Football Twitter for this one. CeeDee was a guy I was in on when researching way back in July.

That was until a couple of tweets showing Lamb’s incredible ball skills. What I don't get is why this was news? CeeDee has always flashed in college and his rookie season in Dallas. The Twitter community put that helium into Lamb’s price and now he’s viewed as a sure-shot new WR1. 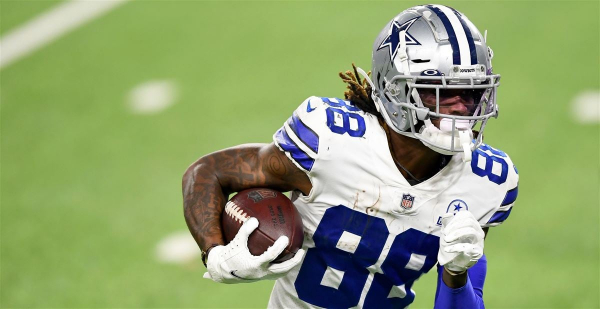 I’ve seen Lamb go ahead of established fantasy assets including his own teammate Amari Cooper. To be honest he appears on this side of the list because of Dak Prescott’s injury past.

There’s a chance Prescott won't be able to deliver his usual production due to his major ankle injury last season. Dak was dangerous, eluding the rush and making plays when things break down. Are we sure he’s the same player?

Dak is Dallas’s most important player in the offense and if it doesn’t work out the bottom will fall out in a hurry. I would be targeting running backs like Damien Harris as a possible return for what people believe to be a WR1 in Lamb.

CHASE CLAYPOOL: Here is another guy I saw in the draft process as a potential sleeper. I love second-year receivers, especially at a discount. 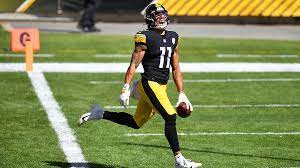 Chase Claypool broke out in 2020 with Pittsburgh.

I was targeting Claypool until his price and preseason were a little too rich for me. The Steelers used a lot of 2-wide sets and Claypool was often working as the No. 3 receiver behind Diontae Johnson and Juju Smith-Schuster.

Chase even played a lot in the third preseason game which tells me he is lower on the depth chart than we all envisioned. Also, one constant reminder I have to give myself is not to reach at WR during the draft.

Especially when the depth at the end of the draft is incredible. If you went Claypool in the middle rounds it's not too late. You can ship Claypool for decent RB depth and go get a lottery ticket off waivers like Jakobi Meyers, Terrance Marshall, and Rondale Moore.

KEENAN ALLEN: Not a surprise there are three WRs on this list because of the aforementioned depth at the position. 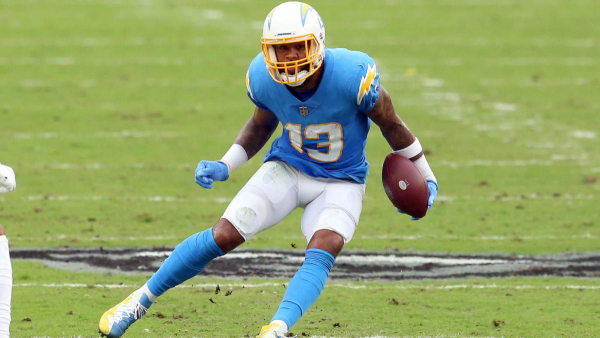 It doesn't get more consistent than Keenan Allen.

One guy I started to fade late in the draft season was Allen. Keenan is going within the top-15 at the position due to the potential of his quarterback, Justin Herbert.

The second-year QB is presumed to build on his rookie campaign however if you look within his division there’s a lot of great defensive minds who have had an entire offseason to study Herbert.

The Chiefs are coming off back-to-back Super Bowl appearances and show no signs of slowing down.

Denver has quietly put together an elite unit on defense. Try to find a competitor who believes in the Chargers’ hype as Allen always has been a major injury concern.

Allen can still get a handsome return due to the potential of this offense did last season. Sell before Allen sits in your IR for most of the season.