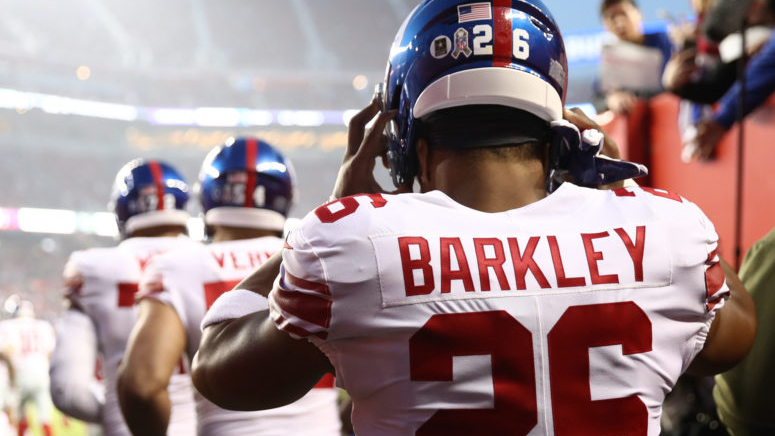 As the fantasy football trade deadline looms, make some buy-low and sell-high trades to bolster the fantasy squad. Don't just sell for the sake of selling, but make moves to improve your roster as the regular season and playoffs inch closer.

BUY LOW BEFORE THE TRADE DEADLINE

Do yourself a favor and look who has Saquon Barkley in your league. Please do it right now! We'll be here when you tab back over, don't worry. Hopefully, you found Barkley currently on a roster that desperately needs to produce a win this week to keep their slim playoffs hopes alive. Desperate managers who can't wait for Barkley to get his conditioning back to full strength will sell his long-term prospects in return for a solid play right now. Use this to your advantage to strengthen your roster for the fantasy playoffs with a league-winning trade.

Joe Judge is hopeful that Saquon Barkley and Andrew Thomas will return after the bye week https://t.co/qyPq8Zm6UA pic.twitter.com/ca1N8U3lCs

Barkley expects to rejoin fantasy lineups in Week 11 after suffering an ankle injury that has kept him sidelined since Week 5. Waiting for him will be a road matchup with a Tampa Bay Buccaneers defense who has allowed just four top-24 finishes to the running back position all season. Try to look past the Tampa Bay game, instead invest more time and focus on Barkley's schedule for the stretch run.

New York will face defenses from the Miami Dolphins and Los Angeles Chargers, who have four top-12 finishes combined all season. It also might be surprising to learn the Giants have yet to face Philadelphia all season. The Eagles defense has four top-12 finishes in nine games so far, and the Giants will oppose them in Week 12 and a potential playoff matchup in Week 16. Lastly, the Giants will take on the Chicago Bears for Championship Week. The last time the Bears have finished as a top-12 defense was in Week 5.

2019: Request from @BobbyO99 & @realcinch- Showing what @saquon coming back will mean to #NYGiants down the stretch after the bye. Injuries have derailed him but a healthy Saquon can do it all. He torched the Redskins for 279 total yards & 2 TDs in 41-35 OT win #TogetherBlue pic.twitter.com/PJG03eJWcl

Barkley will likely need some game reps to regain his fantasy prowess, but he will be worth the wait and investment. He flashed top-five potential at the running back position with back-to-back top-10 finishes in Week 3 and 4 before getting hurt. Look for Barkley to be considered one of the best plays once the playoffs roll around and he gets back to running 90% of New York's snaps. Pay up if your league mate is savvy enough to drive a hard bargain.

Check-in on the Austin Ekeler manager to make sure he's not available before the trade deadline. Ekeler has only scored one touchdown since Week 5 and has one top-20 finish in the last four weeks. The Chargers have a favorable schedule for the fantasy playoffs, with Kansas City, Houston, and Denver in Weeks 15-17. Ekeler could finish as a top-5 option during that span, so don't hesitate if a deal is possible.

If an injury would happen to Melvin Gordon III, then Javonte Williams would be considered a must-play down the stretch and into the playoffs. The rookie running back is an upside RB3 play every week. However, if he would have the backfield to himself, then lookout. There's a chance Williams is a league winner on your roster for a cheap cost that won't dismantle your team. The Broncos could come to their senses and play Williams over Gordon to gain valuable experience next season.

Another deal you could pull off for your playoff run is David Montgomery. The talented running back returned from injury last week and played 85% of Chicago's snaps. He put any doubt of a 50/50 split with backup Khalil Herbert as he out-touched Herbert 15 to four in that game. Hopefully, Montgomery will get his conditioning back to full strength following the Week 10 bye and will be a must-play down the stretch. The Bears face the Vikings, Seahawks, and Giants in the fantasy playoffs, so do yourself a favor and send out some offers in case Montgomery's fantasy manager is impatient.

SELL HIGH BEFORE THE TRADE DEADLINE 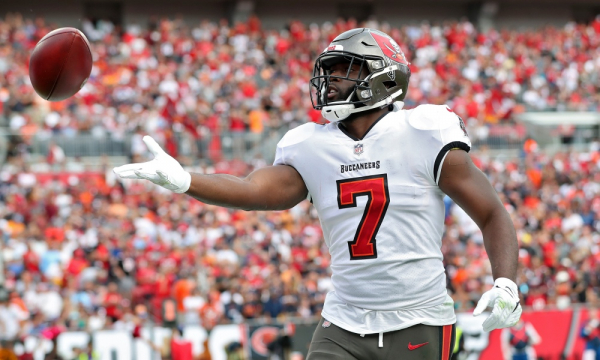 Lombardi Lenny has been a consistent fantasy contributor all season, and you should be using his past performances to your advantage this week in trade discussions. Fournette has five top-25 finishes in eight games, but he will run into some tough competition when it matters most. Tampa Bay will take on Buffalo and New Orleans in back-to-back weeks starting in Week 14. Both teams have allowed a combined six top-25 finishes to running backs this season.

For Fournette to pay off in the fantasy playoffs, he would have to produce points in road matchups against the Panthers and the Jets. Carolina has allowed five top-25 finishes this year compared to 13 from New York. That Championship matchup in New York looks very enticing right now, but there is no guarantee you will be alive to see the fantasy goodness. Fournette has been fortunate Tampa Bay has been playing with the lead for most of the season behind the ageless Tom Brady. When the Buccanneers have been trailing in any game, we have seen the offense shift to Ronald Jones in hurry-up and two-minute situations. Sell now before it's too late.

Embodiment of a rookie moment: Kyle Pitts slays Lattimore off the line but has trouble with the tracking/adjustment where Matt Ryan, in contrast to a Mayfield-DPJ tarvet, protects his WR #Falcons pic.twitter.com/UEbFnLVyuh

If you have been following all season, I have been a frequent rider on the Kyle Pitts hype train. When looking at his outlook for the season, the Falcons would use Pitts as a receiver rather than an in-line tight end. It was the way the Florida Gators used him in college, and this screams cheat code for fantasy football's most volatile position in the NFL. I failed to realize Pitts would also be facing stiffer opposition from cornerbacks rather than being lined up against heavier, slower linebackers and safeties.

The loss of Calvin Ridley also shifted all the focus on the rookie tight end, which made it easier for defensive coordinators to gameplan against the talented rookie. Pitts still has tremendous upside, and you can still strike a deal with just name recognition alone. If you currently have Pitts rostered with guys like Dawson Knox, Dan Arnold, or Pat Freiermuth, then look to upgrade your roster any way you can and sell Pitts before the deadline.