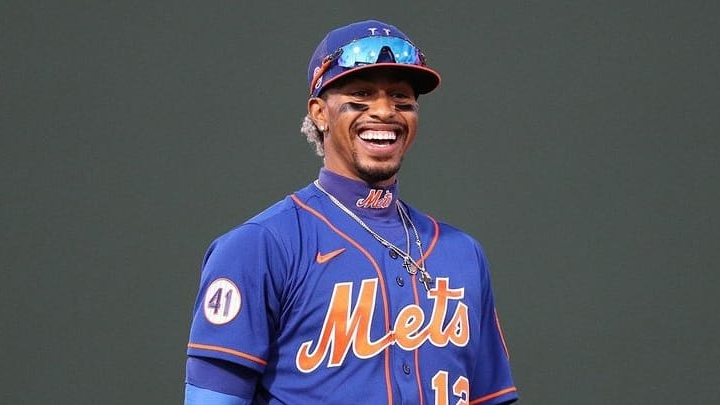 Shortstop seemed like one of the deeper positions going into draft season this year. Seeing players like Adalberto Mondesi, Gleyber Torres, and Javier Baez going inside the top 70 picks, and that was just some of the top-12 guys in ADP per NFBC. I like a couple of those guys to bounce back, but if you have a solid shortstop like Carlos Correa or Marcus Semien who seemed like massive discounts already, I’d stand pat. They had a bad 60 game stretch and ultimately have bounced back to what you thought they’d do, and you’re getting rewarded handsomely for that. Overall, if you have guys that you think are playing out of their minds, like Chris Taylor, Jorge Polanco, or Isiah Kiner-Falefa, it may be worth it to test the waters and see if you can get a bit of an upgrade for the rest of season projections.

Outfield has been a weird position this season. Three of the top-10 outfielders were drafted outside of the top-50 at the position. Jesse Winker, Bryan Reynolds, and Cedric Mullins. Players like Christian Yelich, Mike Trout and Cody Bellinger who were considered the top tier at the position have been injured and you may have picked up guys like Mullins or Reynolds off waivers and reaped the benefits of it thus far. However, if you can flip a player like Mullins or Reynolds for a higher end outfielder, you should do it. I can’t stress this enough; fantasy baseball is not about “what have you done for me?” it’s about “what are you going to do the rest of the way?”

For this series of buy low articles, I’ve based the buy low concept off points leagues, I’ll be using CBS points scoring. In the hundreds of points-based fantasy leagues that I’ve played in, these are by far my favorite settings. The hitting points are below.

Lindor’s had a bad debut season with the Mets. He’s also locked into a contract with them for a long time. He won’t be going anywhere, and he’s also going to have to play his way out of this slump. His hard-hit rate is down from where he was when he was an elite shortstop, but it’s still above average. His great plate discipline will help him out massively, and his BABIP being 50 points under his career norm should regress to the norm soon as well. Volume alone is going to bump him back up into the top-ten shortstops this season even if the disappointment continues. Lindor’s under performed so far, he’s still the number 13 shortstop in fantasy points. Buy low if you can, Lindor is still a top six or seven shortstop for me.

Baez is such an interesting player. He hits the crap out of the ball when he hits it, but he also swings and misses a ton, while not walking at all really. He’s always been a more valuable player in roto, and that is still the case now, his counting stats are fine, as well as the home run and steal totals. The fact that he had five straight seasons of a .273 batting average or higher made it seem like he could be the type of player to beat analytics. Well that may all be catching up to him now. Even if that is the case, he’s still an exciting player who can get hot and go on a month-long tear and provide you a lot of value. Here's the craziest play I've ever seen in an professional baseball game, of course it involved El Mago.

A lot of times in fantasy baseball, you need to go with your gut and take a big swing at a player. That player for me is Gleyber Torres. His stats have been bad and there’s no way around it. His counting stats have been lackluster, the home runs are way down, a career low batting average, Torres has had a rough go of things. Overall, he has some peripherals that suggest he may be able to turn this thing around. He’s 77th percentile in walk rate, 65th percentile in strikeout rate, 83rd percentile in chase rate, and he's shown some pretty surprising speed too, being in the 52nd percentile and stealing six bags so far. These numbers show that Torres still has fine plate discipline, he just needs to get more barrels when he makes contact. Again, this is kind of a leap of faith, but his values at an all-time low, you want to buy at the dip.

Mookie’s been disappointing this year. Mookie’s also been a top 10 outfielder this season. Mookie’s very good, however you may be able to get him at a discount for what he may produce the rest of the way. His .274 BABIP is 30 points under his career mark, while his contact metrics are pretty much the same. As of now, you’re getting a top five outfielder for a top 10 price, I’ve seen some wild trades on twitter involving Mookie, and it doesn’t hurt to at least inquire about what it may take to acquire him.

it wasn't an earthquake, it was me making a trade for mookie betts in fantasy baseball. pic.twitter.com/Desx1g1X88

It may not be fair to call Conforto a “buy low” because he’s spent a lot of his season injured, but even when he’s played, he’s been less than impressive. In 200 plate appearances thus far he’s hitting .202 with three home runs, and 35 combined runs and runs batted in. However, he has a career high walk rate, career low strikeout rate, and a BABIP that is 40 points lower than his career norm. Conforto is much better than the player we’ve seen over this small sample, while he may not be the .322 batting average guy we saw last year, the power is real and he should hit somewhere in the .240-.250 range for the rest of the season, that combined with his walk rate would make him a potential top-15-20 outfielder the rest of the way. See the tweet below from @Mike_Kurland

Yes, injuries may have caused the slow starts some years but there's a chance this is a thing. pic.twitter.com/CR4NNgbtBm

Yastrzemski is that classic journeyman story that makes you love baseball. Doesn’t get his shot until age 28 but shows why he shouldn’t have been down there for that long. While I don’t think he’s as good as what he showed over the 60-game season last year, I think he’s somewhere in between 2020 and 2021. A player with good plate discipline, some solid pop, and will provide good counting stats. Overall, what we’ve seen from him is disappointing mostly from a batting average standpoint but given that his BABIP is 50 points lower than his career mark, I’d expect some regression in that category. I had Yaz as a top-20 outfielder coming into this season, I’d expect him to produce as such the rest of the way.