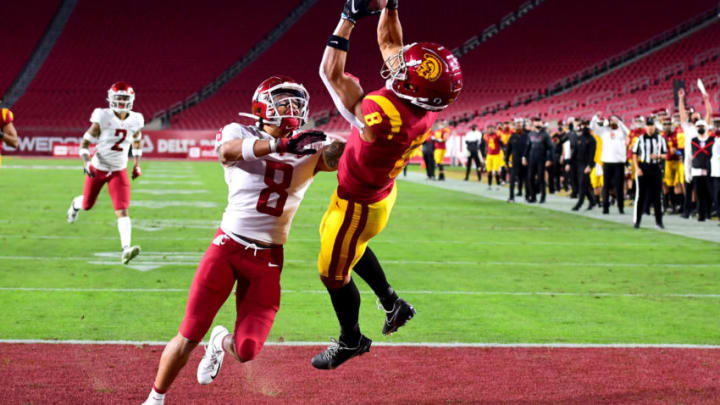 It’s only been a few weeks since the NFL Draft, but fantasy football season is in full swing. By now, we’ve all read endless articles about the top rookie dynasty players, which rookie ended up in the best system, etc. (and if you’re like me, you’re prioritizing each rookie in your sleep). However, as we saw last season, being high in the rookie preseason rankings doesn’t always translate to fantasy success (Zach Moss, anyone? Ouch). So, for us redraft plebians in search of this year’s Justin Herbert or James Robinson, I want to pick a few late-round stash targets.

Going to a Lions team in complete rebuild mode, Amon-Ra St. Brown has the best chance out of this group of rookies to make an immediate impact. After trading away both Kenny Golladay and Marvin Jones Jr., the Lions are in desperate need of a playmaker in their wide receiver corps. St. Brown is an excellent route-runner with the ability to break away from defenders. He’s not particularly fast vertically, but his quick reads and ability to separate make him well-suited to be a slot receiver. Detroit also has a new signal-caller in Jared Goff, and we all know how he loves his slot guys!

I’m a big believer in drafting your running backs early and reserving your late-round picks for handcuffs, but I’m making an exception for Javonte Williams. The Broncos parted ways with Phillip Lindsay this off-season, leaving Melvin Gordon III as the only feasible starter. (Yes, I know they have Mike Boone and Royce Freeman, but let’s not kid ourselves.) Vic Fangio likes to operate a timeshare in the backfield, and Williams clearly benefits as the number two back on the roster. Gordon has the uncertainty of a suspension following him around after a DUI last season, but even if he’s not, Williams has the talent to take over the starting position in his own right. Despite sharing the backfield with Michael Carter in North Carolina during the 2020 season, Williams posted an insane stat-line. In 11 games, Williams rushed for 1140 yards and reached the endzone 22 times. This guy is the real deal, and I’m all in on stashing him.

Kadarius Toney makes this list because of the opportunity in New York. Hear me out. Although the receiver room looks crowded at first glance, most of the players have a significant history of injury. Since his rookie season in 2016, Sterling Shepard has only managed to play one full season. Kenny Golladay only played five games last season, and I don’t like the chances of his hip holding up on a MetLife Stadium turf monster that claimed more than its fair share of players last season (RIP 49ers). Evan Engram has also had his fair share of injuries, but even with a full season under his belt last year, he caught one whole touchdown.

I don’t like to use the term “injury-prone,” but it’s indisputable that this group of pass-catchers has missed considerable time on the field due to injury. If I were a betting woman, which I am, I’d bet one or two of them will go down for a substantial amount of time this season. This should give Toney an opportunity to flash his versatile skill set as a receiver and rusher.

If you’re plagued with short-term memory like me, you had to refresh yourself on who exactly Rondale Moore was. He had a stellar freshman year in 2018, finishing with 114 catches for 1258 yards and 14 touchdowns over 13 games. However, he missed most of the 2019 season due to injury, and he opted out most of the 2020 season. There were also concerns about his size; at 5’7”, he’s not exactly the prototypical receiver. But, what Moore lacks in size, he more than makes up for with speed and freak athleticism. The Cardinals don’t really have a great slot option, and with teams more often than not double-teaming DeAndre Hopkins, Moore could see a lot of opportunity very quickly in Arizona’s play scheme.

Like Rondale Moore, Elijah Moore is another small, shifty guy who thrives in the slot. I am honestly surprised he slid to the second round of the draft. Out of 200 catchable balls, Moore only dropped TEN! He also possesses the ability to shake defenders, and he’s a YAC monster. In eight games in 2020, Moore finished with 86 catches for 1193 yards. Jamison Crowder is the incumbent slot receiver, but with the uncertainty surrounding his contract and his injury history, Moore could slide in the role and produce immediately. We’ll have to pay close attention to new developments in New York before draft season begins, but keep Moore on your radar.

Maybe it’s the SEC bias in me, but I was surprised it took so long for a team to draft Terrace Marshall. He only played seven games in the 2020 season due to opting-out, but he still finished with ten touchdowns and 731 receiving yards. During the offseason, Carolina saw the departure of Curtis Samuel, leaving Marshall with plenty of opportunity to show he’s talented enough to be worthy of a starting roster spot. As a little Easter egg, Marshall is also reuniting with Joe Brady, his offensive coordinator at LSU during their 2019 NCAA Championship season. Call me crazy, but I can sense some magic here.

Well, there you have it. Let me know if you agree, disagree, or feel indifferent and follow me @Britt_Flinn on Twitter!