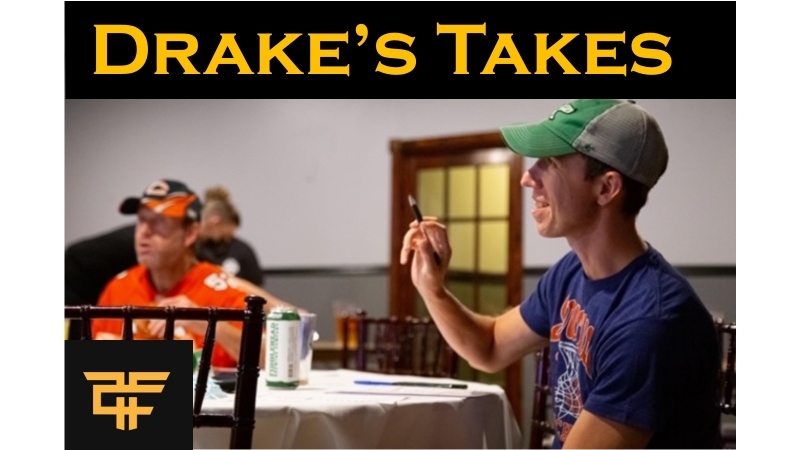 Random musings from the host of the "Fantasy Football Hustle" podcast.

Last week I talked about Mike Davis and Devin Singletary.  I loved Davis.  What’s not to love really?  He gets carries, sees massive target shares, and gets goal-line touches.  More importantly, he converts on them.  Singletary is someone I said to shy away from.  Now granted he had a very fine game.  He ran for 71 yards and caught four balls for 50 yards.  Nothing wrong with that.  But he did what he always does, or doesn’t do, and that is score rushing touchdowns from the goal line.  Again, he was stuffed multiple times inside the 5.  The team drafted Zack Moss for a reason and last Sunday you saw why.  If Josh Allen isn’t running it or it’s going to some 4th string Tight End then it’ll be Moss.  Hell, it’ll be the guy who threw the dildo on the field before it’s Singletary.  Nothing against Singletary or the Mafia but once Moss comes back which could be this week it’s over for Singletary in terms of rushing TD's that aren't long runs.  He might never get a goal-line carry again.

Fantasy football to some extent is about names.  Guys in your league don’t give a damn about air yards.  They won’t accept a trade when you explain target share.  Trust me, I’ve tried.  What they want are names and fantasy points.  Well, this week you might be able to win your matchup with guys people might not know or ever want to.

Greg Ward is going to see 10 targets for the Philadelphia Eagles.  Last year’s Uber Eats driver (probably) turned WR was quietly targeted 11 times in Sunday’s tie vs Cincinnati.  This week the Birds are without DeSean Jackson, Jalen Reagor, Alshon Jeffery, and Dallas Goedert.  It’s literally Zach Ertz, Miles Sanders, and this guy.  If you can’t find room for a receiver getting 10+ looks in a game you must already have your name engraved on the trophy.

Look at what Tim Patrick did on Thursday night.  He took seven targets and turned them into six catches for 113 yards and one score.  Tim freakin’ Patrick!!  What if this weekend you need a receiver and scroll the waiver wire only to come across Hunter Renfrow of the Las Vegas Raiders.  He might look like the kid you beat up high school for scuffing up your new Jordan’s but now he’s a baller.  Nine targets in week 3 and he scored.  That’s something you didn’t do in high school.  No Henry Ruggs.  No Bryan Edwards.  Derek Carr’s aDot is measured in multiples of zero.  He’s going to catch passes in a game the Raiders should be trailing in.  This isn’t hard folks.

I checked out the Bob Weir documentary on Netflix last week called, “The Other One.”  I wasn’t a Dead Head save for the dancing bear patch on my backpack in 9th grade.  But it was really a great look into a band and section of music I’ve never cared to venture into.  The most interesting part was learning he was the “good looking one” and actually got tons of action.  Who knew?  Jerry and Pig Pen were catching shrapnel like Jerry Rice caught touchdowns.

If you know your league mates go drinking on the weekends send them trade offers at 1 am.  You’ll be amazed how many boozed-up bros think your backup TE and Justin Jefferson are worth their stud running back.

Having a QB that runs is a cheat code.  We know this.  It’s week 4 and maybe you aren’t feeling Drew Brees or Carson Wentz.  Sorry.  Of the top seven QB’s in a standard 4pt TD scoring system six have at least 74 rushing yards.  Only Aaron Rodgers (26 yards rushing) fails to meet that metric.  Mind you Lamar Jackson isn’t included in that list as he currently resides at QB 12.  If you want to make a run at a fantasy title go target a QB who can run.

It’s deep and just full of mediocrity.  In a half-point PPR, the top five TE’s at the moment are Noah Fant (who played an extra game at the time of writing this), Travis Kelce, Jonnu Smith, Tyler Higbee, and Mike Gesicki.  Names like Jimmy Graham and Mo Alie-Cox fill out parts of the top 10.  The player at TE 10 (Hunter Henry) is averaging less than 10 points per week in this format.  Mark Andrews has 1.40 points than Jordan Reed who had multiple games with only two catches.  The point is, well damn I don’t know.  The position stinks.  Every week you are rolling the dice on someone you pray scores a TD.  Check the matchups and focus on teams with bad safety and linebacker play.  A certain team in southeastern Pennsylvania comes to mind.  Hello, George Kittle blow up game.

I closed my pool today.  Life is about the little things.  Watching a tarp go over the beautiful blue water just is a punch to the soul.  See you in May, my expensive friend.

A Bon Jovi ad came on YouTube as I was writing this.  They easily are top three on my all-time best concert list.  Incredible showman.  Songs everyone knew.  Just energy for hours.  A true American treasure.

If Logan Thomas can’t get it going this week it’s just not going to happen.  He has 24 targets over the first three weeks.  His metrics are all off the charts in terms of TE air yards and percentage of team targets but the guy doesn’t do anything with his catches!  He’s caught exactly four balls in every game this year.  Baltimore might prove a tough challenge but the Washington squad is without Steven Sims Jr and Terry McLaurin DNP on Friday with a thigh injury.

Super excited to help launch a new podcast called “Fighting Chance Worldwide” for the up and coming analysts at FightingChanceFantasy.com. I remember when Ryan Hallam (@fightingchance) and Steve Rapin (@FantasyGeek37) were so generous and kind to let Dwain McFarland and I start the Fantasy Football Hustle.  Without their leadership and honestly just letting us go figure it out live we wouldn’t be doing it three years later.  I’m happy to see folks who want to be a part of the Fighting Chance brand.  The future is bright and I hope some of these kids remember me when they make it to the big time.  Follow Fighting Chance Fantasy on Twitter @FCFantasySports and lookup the show on iTunes.

Are people watching the NBA Finals?  The Heat have as much chance of beating the Lakers as my out of shape old frat buddies who I play with on Wednesday nights.

He’s not overly pricey but I’ll definitely have to save a few bucks for Deshaun Watson ($6600).  The Vikings secondary is pathetic.  They just allowed Ryan Tannehill to throw for 321 (although he didn’t throw a TD) and in week 1 let Aaron Rodgers go for 364 and 4 TD’s.

Cam Newton at $6400 vs Kansas City looks like as 30 point night.  He’s going to have to go nuclear to keep up with Patrick Mahomes.  I can easily see him rushing for 75 yards (they allowed 83 last week to Lamar Jackson) but he’ll actually complete some passes, unlike Jackson.

I mean what bad is there to say about Alvin Kamara?  He’s 8k on DK but I don’t care.  No Michael Thomas, no Jared Cook this week.  #LFG.

If you listen to the Hustle you know we aren’t fans of Ronald Jones ($4700) but this spot is too good.  Leonard Fournette won’t play.  The Chargers banged-up defense should be on its heels in the second half which means Rojo carries to burn out the clock.  I’m in this week.

I can’t get away from my guy Mike Davis ($5700).  The Cardinals can’t stop RB’s out of the backfield and Davis will feast on targets for days just as he did in week 3.  Play Davis with confidence.

Greg Ward ($3900) in the Sunday Night game is so easy.  Should be in every showdown lineup.  Targets on targets.

Will Fuller ($5900) and Brandin Cooks ($4500) are excellent stack options with the aforementioned Watson.  Cooks is cheaper than Randall Cobb this week.

Hunter Renfrow ($4600) as I said earlier, they don’t have anyone else besides Darren Waller ($5200) who you could also play.

Listen to the Fantasy Football Hustle by subscribing to the YouTube Channel: https://www.youtube.com/channel/UCSveOLm03O31Xm0KY6J5Xzg