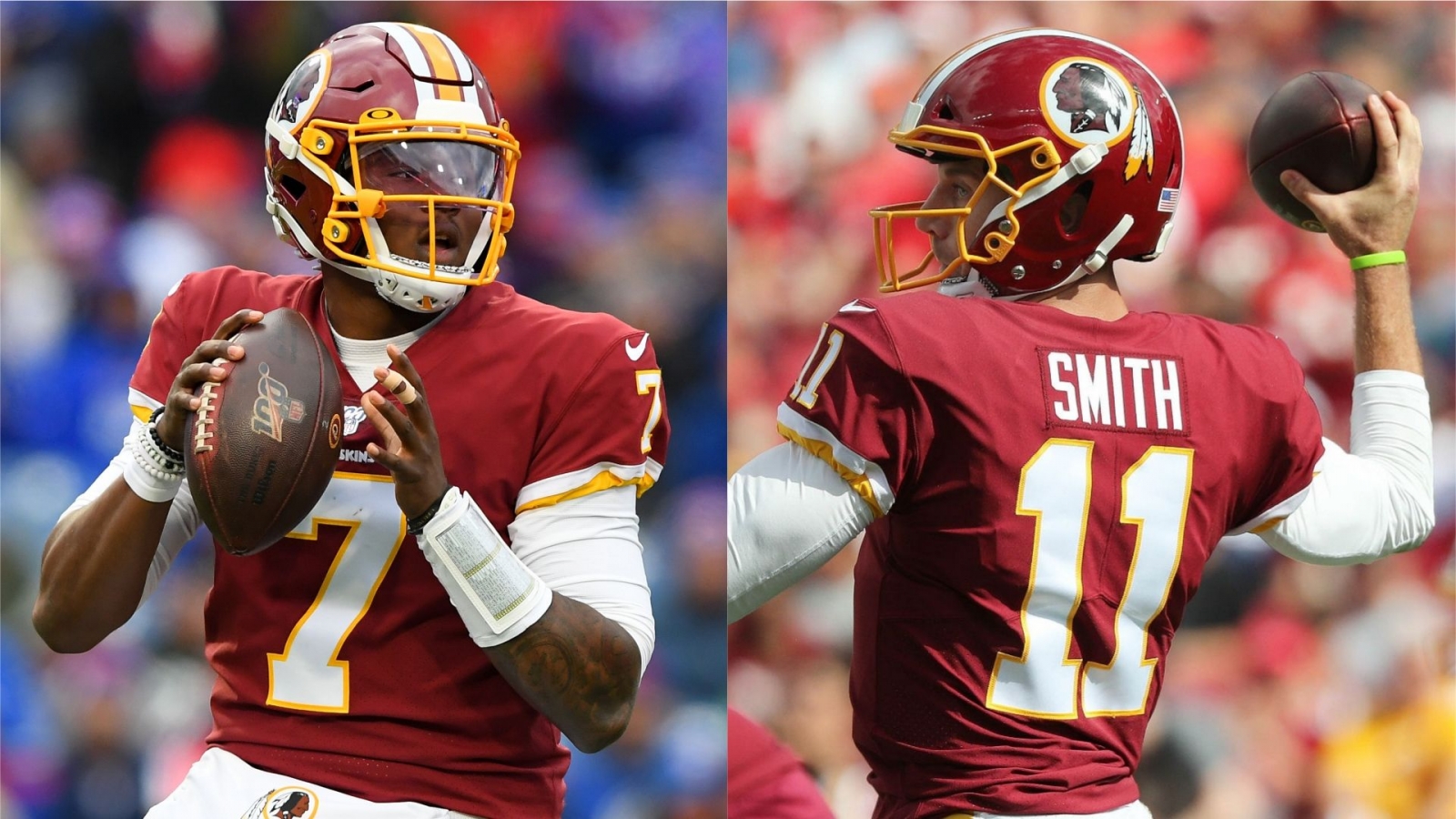 After Jay Gruden was relieved of his head coaching responsibilities in Washington earlier this offseason, we were informed of several misconduct issues within the organization that had/has been happening for some time; from owner to head coach to depth players and everyone in between. On top of everything else, the team has been forced into changing the name of the franchise (probably something that should have happened a long time ago) and will be playing as the “Washington Football Team” for the foreseeable future. I’ll stay out of the details since this article is about QB play and not leadership woes, but for years the number of problems coming from within that organization started at the top and have trickled its way down as it spread throughout the entirety of the franchise. Ron Rivera is the new head honcho in town and is already taking issues head-on. Most recently, running back Derrius Guice turned himself in on domestic violence charges and the regime took no time at all to release the LSU product from the team. Rivera is on a mission to set this franchise straight and get moving on the right path. Let’s just hope Dan Snyder can stay out of the news for a few months. Time to take a look at what the Washington Football Team has at quarterback for the 2020 season and beyond.

Why Dwayne Haskins is the starter and there is no QB competition in DC.

During Dwayne Haskins' rookie campaign, he showed plenty of room for improvement, but the rookie quarterback also showed flashes of what he is capable of when he is on. Make no mistake, Haskins is not cemented as the franchise QB, but it’s right there for the taking and we should all expect Haskins to get first shot at the starting role regardless of Alex Smith’s health.

Week 11 of the 2019 season (NYJ vs WASH), Dwayne Haskins & co. were playing from behind, so we got a healthy dose of passing attempts. Watching game film from that week, it’s clear Haskins has hot feet early and often inside the pocket, which leads to some sacks and incompletions that could have been avoided if Haskins had hung in there for just a bit longer to deliver the throw. There are times Haskins showed great feet and pocket awareness while delivering a nice throw on the move. Early on, Haskins made a big play and looked poised while showing excellent movement in the pocket and delivered a bomb right in the breadbasket of Terry McLaurin. Even though this play was called back due to a holding penalty, it showed us that Haskins has the tools to be the guy if he can clean up some areas of his game for year-two.

The most noticeable (and fixable) problem to me is his pocket presence and awareness. There were quite a few drops that an NFL caliber player should always make, which reflects poorly on Haskins' stat sheet. The ugly sacks stuck out the most, but these are simply rookie growing pains that were amplified by the most dysfunctional franchise in professional sports. There is a lot of room for improvement for everyone on the offense, but it’s always a good sign when the young talent shines through even during a bad season.

Haskins has been dropping dimes to Terry McLaurin during training camp, and I really expect their connection to continue into the regular season. Both of these players will have the opportunity to take big leaps this fall.

The comeback of Alex Smith is something we can all root for, even if we don’t think it’s wise for him to continue playing. Ultimately, Alex Smith is the only one that can determine if he is fit to play in an NFL game, but at some point, the journey must end. In Smith’s case, it will end with him mentoring Haskins and preparing him to be “the guy” for this team. It just doesn’t make sense for the Football Team to play Alex Smith over Dwayne Haskins in 2020 barring something catastrophic. Being “cleared to play” and actually being ready to play are completely different situations, and Alex Smith has simply been cleared to play which doesn’t mean he is ready to come in and play in an NFL game. We see the videos of him and his family celebrating his comeback, but his leg just looks fragile and it makes me so nervous watching him drop back in training camp.  Even if Smith was 100% healthy and ready to play again today, Dwayne Haskins would be the starter for Washington. It isn’t because Haskins is way better than Smith, it’s because he is young, talented, has the potential, and Ron Rivera & Co. are pushing towards the full-youth movement. Now that he has some game-time experience and the support of those around him, he is ready to ascend. After seeing some training camp videos I am more convinced that Haskins is ready to take the next step in his game, and also more convinced that Smith will never hit the field during a regular-season game again. I know that is not something we want to hear when we are rooting for one of the greatest comebacks of all time, but I just don’t see how Smith takes any meaningful snaps this season or even the 2021 season.

The Washington Football Team are hitting the reset button, and hitting the reset button does not mean reverting back to Alex Smith. They have to commit to Haskins because he will either be “the guy” or he won’t. If he is, then you are set for a long time at the most important position in sports, but if he isn’t the QB of the future then it will put them in a better position to draft someone such as Trevor Lawrence, Trey Lance, or Justin Fields in ‘21.

Last season in seven games, Haskins threw seven touchdowns and seven interceptions along with 1,365 yards. No, those numbers are not great by any means, but Haskins improved as he gained experience on the field. His performance against the Eagles in week 15 was a solid one as he went 19/28 for 261 yards, two touchdowns, zero interceptions and just one sack taken. Even with a few misfires and some questionable decisions, the young signal-caller for Washington looked much more poised and polished throughout this game than in previous weeks.

Looking ahead to 2020, here are my projections for Haskins:

Hopefully, he can cut down on the interceptions more than I anticipate, but this is a reasonable expectation for Haskins this season. Haskins can outperform these projections and can surpass the 4,000-yard mark with a few big games. The ceiling for the second-year QB is around the 4,200-yard mark with 25 touchdowns and 10 interceptions, but the floor could fall out from under him if he fails to perform in the first few weeks of the season. I would be happy to have Haskins as my QB3 in a superflex league, and I am comfortable enough having him as my QB2 if need-be. The gunslinger is being drafted currently at QB32 (Fantasy Pros), so the value there couldn't be any better. In fantasy terms, it’s tough to place a true value on Haskins; ultimately this comes down to how he performs in the upcoming season. Even though it feels like Dwayne Haskins is on thinner ice than others, this is his job to lose.

Who do you think will be the starting quarterback in D.C. by the end of the season? Let me know on Twitter @ConnerShears!