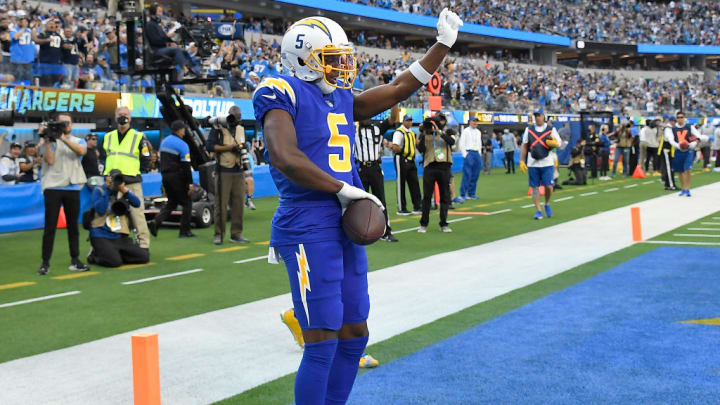 For plenty of fantasy football managers, the season is coming or has come to an end. Many managers will be happy to get this season over with, due to the lost games caused by the rash of star players getting either injured or players hitting the COVID list. The one fact remains that the offseason is nearing and it’s time for the dynasty fantasy managers to come out and play. This is when the fun begins.

For me, the one thing I like to do before the fantasy super bowl is played is scour through the waiver wire trying to find some diamonds in the rough and stash some talent for next year. One should try to focus on young players that have the potential to have a breakout season next year or are in play for a significant role with the offense. Although the free agency period and NFL Draft are still to come, some of these players may withstand the infusion of new talent and be producers for your dynasty teams come next Fall. Here are some players that may be lingering around your waiver wire that are rostered around 10% of leagues or lower that could be excellent stash candidates for your dynasty rosters.

One thing that can’t be denied is that when given the opportunity Tyler Huntley has gotten Lamar Jackson owners or any fantasy managers out of a bind in recent weeks. When Jackson suffered an injured ankle, Huntley came in and filled in very admirably. This includes his spectacular performance in Week 15 when he started for the Ravens and threw for 215 yards and two touchdowns while rushing for an additional 73 yards and scoring two more touchdowns. If you’re looking to stash a young quarterback with some juice in a two-quarterback/super-flex league look no further than Huntley.

Every team passed on QB Tyler Huntley in the 2020 draft.

He stayed ready for his shot.

Now the odds of Trey Lance actually being available in your dynasty league’s waiver wire may be slim to none, but if he is pound that add button immediately. Lance is the future of the 49ers' offense and there is no reason for him to be on any dynasty waiver wire. The potential is there now all he needs is better health and some seasoning to get ready to make an impact in 2022. Lance should be rostered in all dynasty league formats.

Has Davis Mills shown the Texans brain trust that he is the franchise’s quarterback of the future who the hell knows? Over the last couple of weeks, he has shown flashes that he is capable of leading the team to victory and over his last four games has averaged 276 yards passing, thrown seven touchdowns, with two interceptions. Mills has continued to improve in each of his starts and is a quarterback that one should consider adding for future possibilities.

Now that's a great throw from Mills with a blitz bearing down. pic.twitter.com/Wk6NnUes4b

In deeper dynasty leagues one quarterback that should be available in most leagues is Kyle Trask. As we all know Trask is currently stuck behind the G.O.A.T. Tom Brady but in his senior season with the Florida Gators Trask compiled 4,283 yards passing, 43 touchdowns, and eight interceptions. Head coach Bruce Arian has mentioned that he likes what he has seen from the rookie so far, and what better way to learn than to sit behind the legendary quarterback. There’s plenty of weapons in Tampa Bay and should something happen to Brady during the offseason Trask could be in line for a breakout season.

Phillip Lindsay is just two years removed from back-to-back 1,000 rushing yards seasons. The competition he has surrounding him in Miami is nothing to be alarmed about either. I can see the Dolphins addressing the running back position during the offseason but I can also see Lindsay carving out a role for himself in the passing game. During those productive rushing seasons, Lindsay also averaged 35 receptions per season and could be useful in dynasty PPR league formats. Lindsay should be rostered in all dynasty league formats.

When Derrick Gore has been given the opportunity to carry the rock or be targeted he has not disappointed. Although the sample size is small, when he has received at least nine carries Gore has averaged 14.7 PPR fantasy points per game. The running back has even caught all seven targets thrown his way this year. Should Clyde Edwards-Helaire miss time due to injury, Gore should be called upon to assist the Chiefs backfield. Look to stash Gore in all dynasty league formats.

Another running back that fantasy managers should look to add in all dynasty league formats is Marlon Mack. Mack has proven in the past that he can be a bell cow if he is healthy. The problem with Mack nowadays is that there is a stud named Jonathon Taylor standing in his way for him to get any touches at this time. Mack’s name was swirling around the rumor mill during the trade deadline and he should be on the move to a new team during the offseason since Mack will be an unrestricted free agent in 2022.

Remember in the 2020 NFL Draft season Ke’Shawn Vaughn was everyone's draft darling as he was getting a lot of hype leading up to that draft. Well due to the emergence of Ronald Jones II in 2020 and the signing of Leonard Fournette, Vaughn became the forgotten man in Tampa Bay. With Fournette’s recent injury the door was slightly left open for Vaughn to come in and get some touches in for a game. Over the last game and a half, he has received 10 carries and produced 89 rushing yards and a touchdown. Again this is a small sample size but it is something that should spark an interest in dynasty managers looking to stash a running back for the future.

Now for super deep PPR dynasty leagues, we have Chris Evans. The rookie running back is the third-stringer in the Bengals offense behind Joe Mixon and Samaje Perrine, but in the limited action, he has received Evans showed glimpses of his receiving skills. For the season Evans has caught 12 of the 13 targets for 127 yards. Should Mixon miss time due to injury Evans will immediately be the receiving running back in this potent offense. Stash Mr. Evans if you have the space.

With Justin Herbert dealing, dynasty managers should look to stash any Chargers’ weapons they can get their hands on. There are two wide receivers that should be garnering your attention and that is Jalen Guyton and Joshua Palmer. Both receivers have shown they can be assets on any fantasy team. On multiple occasions this season both receivers produced double-digit fantasy point games when called upon. Guyton is more of a deep-threat big-play receiver, while Palmer is your PPR machine play. What makes them both extremely intriguing stashes is the fact that Mike Williams is an unrestricted free agent next season and both players will be in line for a nice uptick in targets next season, should Williams indeed move on to greener pastures. Add both wide receivers while you can, but I would prioritize Palmer first.

This route from Josh Palmer was filthy 👀 #BoltUp

When Josh Reynolds was claimed off waivers earlier this season many fantasy managers thought nothing of it. Some forget that he and Jared Goff were teammates with the Los Angeles Rams for the last few years, so the chemistry is there. Goff has welcomed Reynolds with open arms. Over his five games, Reynolds has averaged six targets per contest and has produced three double-digit fantasy points games. Reynolds is an excellent stash candidate and should be added in all league formats.

Speaking of weapons in high-octane offenses, here we have Pringle. No, not the potato chips, but Byron Pringle if you're keeping track at home. To be honest I’m in total shock that Pringle is only 3% rostered in Yahoo leagues. Surely it’s because Tyreek Hill and Travis Kelce get all of Pat Mahomes’s love but what Pringle has done this year under the radar is truly remarkable. The receiver has produced double-digit fantasy points in seven games so far this season. Many fantasy managers thought this would be the year Mecole Hardman would step into the WR2 role for the Chiefs, but it appears that Mr. Pringle is the true de facto WR2 for Kansas City and the player to stash on your dynasty teams.

"Excuse me! Excuse me!!" -@pringle_byron, probably

Terrace Marshall is a talented rookie that just could not gain any traction this year with the Panthers. In the first three games of the season, Marshall was building a rapport with quarterback Sam Darnold, but after that, the wideout started to tumble down the rabbit hole into obscurity. Marshall also suffered a couple of injuries that further delayed his development this year. Marshall totaled 23 touchdowns in his final two seasons at LSU. Therefore, if the rookie happened to be dropped by an impatient dynasty owner, stash him now for free if you can.

Somebody may need to slap me to my senses for bringing up this wide receiver to stash. Somehow, someway Laquon Treadwell has become a relevant wide receiver for the first time in his career. After being considered a bust when the Vikings drafted him in the first round in 2016, Treadwell has finally shown some life in his career. Over the last five games, Treadwell has built some serious chemistry with rookie quarterback Trevor Lawrence, who targeted him 33 times for 22 receptions for 294 yards. In that same span, Treadwell has more receptions and yardage than presumed Jaguars’ WR1 Laviska Shenault Jr. who has produced 21 receptions for 186 yards on 33 targets. Treadwell is a receiver to consider stashing in deeper dynasty league formats.

With the departure of Kyle Rudolph during the offseason, Irv Smith Jr. was primed to have a breakout season in 2021 for the Vikings. Smith Jr. suffered a meniscus injury that caused him to have season-ending surgery during training camp. If the tight end happens to be in your waiver wire and you are in need of tight end help try to add Smith in all league formats.

A tight end that I’m really intrigued to stash in all my dynasty leagues and so should you, is Brevin Jordan. Jordan did not sniff the field until the eighth game of the season when he caught three of his four targets for 41 yards and a touchdown in his debut. In the second half of the season, Jordan had another couple of outings where he scored double-digit fantasy points. Furthermore, I just wanted to recap Jordan’s collegiate career, where the tight end was a big play waiting to happen as he tallied up 105 receptions for 1,358 yards and 13 touchdowns in three seasons at the University of Miami. In his last season with the Hurricanes Jordan averaged 15.2 yards per catch, which is pretty impressive for a tight end.

Brevin Jordan has emerged as a huge threat this season!

When Dan Arnold was traded to Jacksonville during the season, Arnold quickly became one of Lawrence’s goto targets. In his first five games with the Jaguars Arnold averaged 7.6 targets per game. With four of those games producing double-digit fantasy points. Unfortunately, Arnold suffered an injury that caused him to land on the injured reserve list and once he came back got sent to the COVID list. If you're looking for a speculative stash in deeper dynasty league formats, Arnold is a name to consider

Hopefully, some of these gems are available in your dynasty leagues to stash, and let’s see if any of these seeds will be barring any fruit come Fall of 2022.

If you would like to discuss this further or have any fantasy or dynasty questions you may reach me on Twitter @smooth1074.