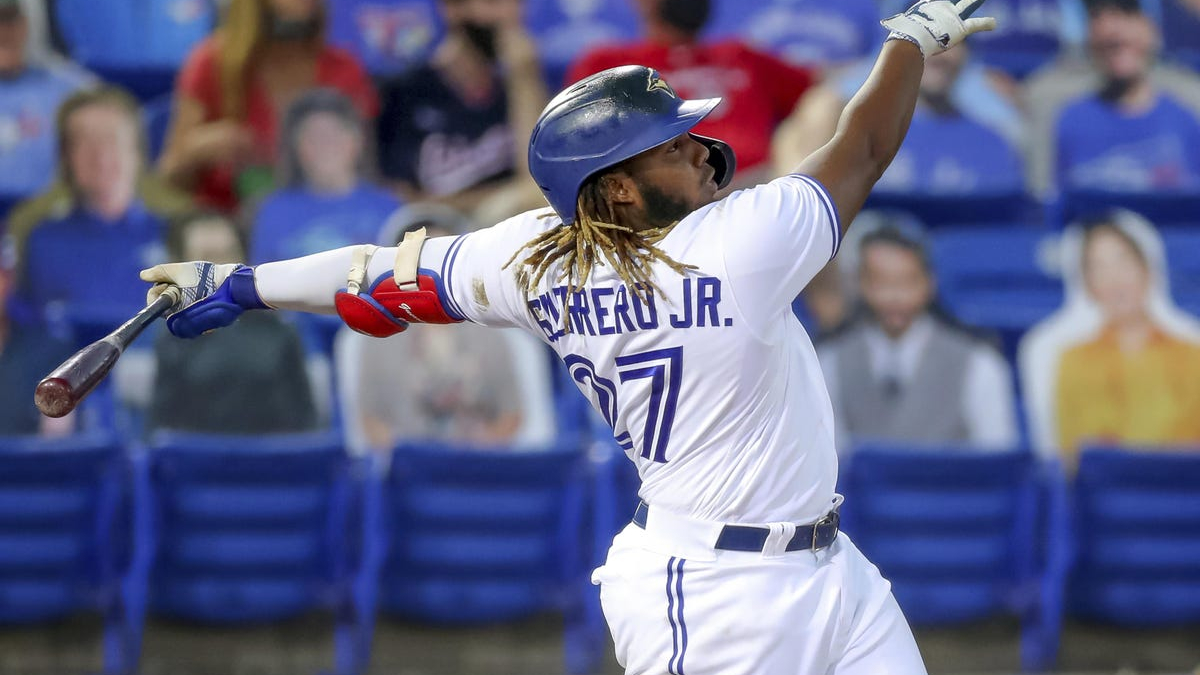 Early, Mid, and Late Round Values: First Base

Early, Mid round, and Late round picks, by Position: First Base

For this upcoming series of articles, I’m going to be covering players that I like based on their values relative to where they’re being drafted. For the ADP being referenced, I am using NFBC data, from March 11th on, to alleviate some of the news received after the lockout, like some of the injuries (Tatis, Wheeler, Rendon, Flaherty) or trades that have transpired. I’ll also be splitting this up into two sections, players for points leagues, and players for roto or category leagues. I’ll be taking three of each. One player in the top 100, one player after pick 100, and one player past pick 200. This gives you multiple options, one of which can be a primary target, one to be a mid-range guy who’s a nice fallback, and one who you can take past round 15 as the backups backup plan.

Looking at the landscape of the first base, it’s changed drastically. It used to be easy to find first base production, but now when I look at first base, the crop of great hitters has thinned out. There are six players who I think are going to be consistent producers at the top of the draft. They are Vladimir Guerrero Jr. Who's a top 3 overall player regardless of format, Freddie Freeman who's been the most consistent first baseman of the past decade. Matt Olson, Pete Alonso, Paul Goldschmidt, and Jose Abreu, past those six it gets dicey very fast. The range of outcomes after those players is vast, and thus I want to get one of those top six players. If I can’t get one of those top six guys, I’ll be shooting for a high upside pick, and then pair that player with a more consistent producer later. For example with this strategy, I’d take a shot on someone like Rhys Hoskins, a player with a ton of upside, and pair him with Brandon Belt 100 picks later. This way you take the gamble on the upside of Hoskins, but you’re also protecting yourself with Belt’s consistent production.

For roto, there are a lot of options with power upside at first base. There’s a group of six players after the top 100 picks that have the potential to give you a handsome reward, those six are Jared Walsh, Rhys Hoskins, CJ Cron, Max Muncy, Josh Bell, and Joey Votto. While I like all of those guys, there is a definitive risk with all of them, making this position one of the harder ones to judge. I’m going in with the mindset of I need a top-six guy. If I have an early pick, I’m taking Vlad Guerrero Jr, if he’s gone and I have a later pick in the draft, I’m taking Freddie Freeman with one of my first two picks. The consistency of the position has faded, so getting one of those two players is a huge week-to-week advantage.

For points leagues, there are a lot more options that I like opposed to the roto format. There is a good chunk of players with plus plate discipline. I don’t feel the strategy of taking Vlad or Freeman is necessary in this format. Taking a player with upside, and pairing him with a player with consistent production later is a good strategy in this format, as there are a lot of players with good OPS numbers towards the bottom of the draft. Making it a heck of a lot easier to fill, especially when you look at most points leagues, and realize there are typically only 12 first basemen being used on a week-to-week basis.

Abreu has been a model for consistent production. The typical line is a .280 batting average, 30 home runs, 100 runs batted in, and 80 runs scored. It’s boring, consistent, and perfect for fantasy. 2021 was a disappointing season for Abreu however, and even in this down season, he produced good numbers. .264 batting average, 30 home runs, 117 runs batted in, and 86 runs scored. That’s a phenomenal season for a player you’d be taking in the sixth round. His metrics are still fine, he’s 89th percentile in hard-hit rate, and average exit velocity, while still being above average in xwOBA, xSLG, and barrel rate. Expectations were high for Abreu after he won MVP in a shortened 2020 season, and it seems as though he’s falling down draft boards for not meeting that same MVP level of play, I intend to take advantage of that on one of the most consistent players over the past decade. Take a look below at Abreu's FanGraphs page since joining the White Sox in 2014, he's been one of the most consistent players in all of major league baseball.

After a down 2019 season, Goldschmidt was being heavily discounted the last two seasons. I took advantage of that raking in some pretty nice stats from him at a low draft cost. Well after a resurgent 2021, he seems to be back to being adequately valued again. His expected stats were awesome, being in the 90th percentile or better in hard-hit rate, average exit velocity, xBA, xwOBA, xSLG, and barrel rate. Although Goldschmidt had the lowest walk rate of his career, it seemed to be because he had a more aggressive approach at the plate, and the results were phenomenal. I love Goldy at this cost, and he should continue producing now that there is some more lineup protection with the acquisition of Arenado last season, and the breakouts of Tommy Edman and Tyler O’Neil. Take a look at Goldschmidt's statcast numbers, they were phenomenal, and it seems some in the industry are not believing he's fully bounced back, otherwise he'd be drafted with the likes of Freddie Freeman 30 picks earlier. 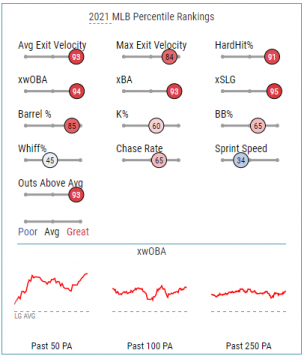 Votto is a player I like regardless of format. After a resurgent 2021, going as the 16th first baseman off the board, I have a hard time not loving him as a pairing with a high variance player like Josh Bell. For the quality of contact Joey Votto had last season, he actually underperformed his expected stats. With an xBA of .274 and an actual batting average of .266, Votto’s bounceback should have been even better. His BABIP of .287 was actually about 50 points lower than his career norm of .342. I’m looking for Votto to improve in batting average while hitting 30 home runs, and 160-170 combined runs and runs batted in, which would make for him being a top 10 first baseman quite easily. Here's Votto taking Will Smith deep in the top of the 9th to tie up the game.

Rizzo has had at least a 9% walk rate every year of his career with the exception of 2012 which was his second season in the big leagues, while also not exceeding a 16% strikeout rate since 2016. I’ve mentioned this before, but in the points format, having players who can balance strikeouts, with walks, are going to produce solid numbers, they may be boring, but they’re going to be solid. Rizzo’s great discipline, along with his ability to not swing and miss, gives him a very safe floor, which again makes him a very nice player to pair with a high upside, high variance player going ahead of him. Personally, I’d take Rizzo ahead of those guys, so getting him about 60 picks later makes him easily my favorite player to take at the position, especially with the Yankees sending Luke Voit to San Diego. Here's Rizzo with an absolute moon shot into the upper deck at Yankee Stadium, where he'll get the luxury of a short porch in right field yet again.

.274/.347/.597 29 home runs, 67 runs batted in, and 72 runs scored, in only 97 games played. Getting Belt past pick 200 seems egregious. Due to the unsexy nature of Belt’s game, he’s been discounted heavily, I see a ton of upside here. He was 94th percentile in barrel rate as well as chase rate, 90th percentile in walk rate, and 89th percentile xSLG and xwOBA. Belt has excellent plate discipline, and although he wasn’t great versus left-handed pitching last year, he was good enough to where he should still play every day. At pick 217, Belt is a sure-fire pick to outperform his ADP. Check out this absolute yakker of a homerun where Belt takes it deep to the second deck at Coors Field.

Voit was incredible in the 2020 shortened season. Leading the majors in home runs, and hitting .277 despite a BABIP of .268, Voit seemed as though he was going to be a mainstay in the Yankees lineup for years after he was dealt from St. Louis to the Bronx and seemingly tore it up. Well, what a difference a year makes, Voit saw his strikeout rate rise, and his contact rate plummet. That being said, the oft-injured first baseman should get a chance to play daily with the move to San Diego, and the introduction of the designated hitter in the NL. The upside is 30-40 home runs, and he’s well worth a flier at pick 250, especially if you have a guy like Belt, Rizzo, or Votto. Here's Voit hitting his first spring training home run with the Padres, where he should usurp Eric Hosmer and his awful 3.3-degree launch angle.