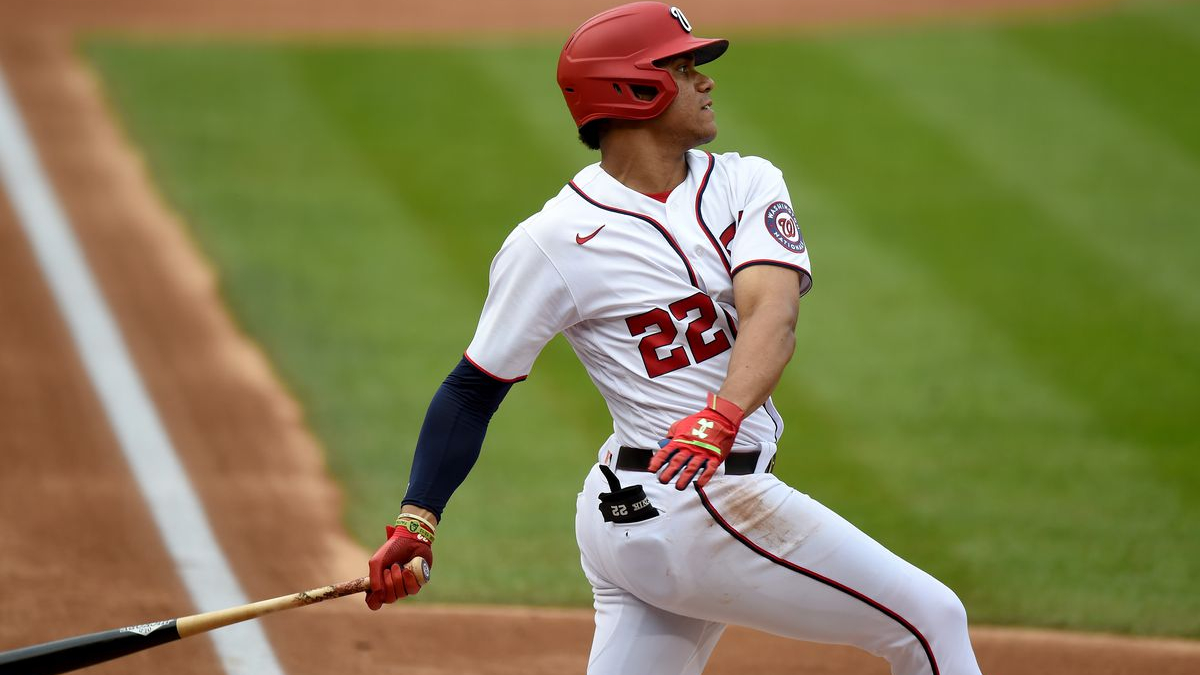 Early, Mid round, and Late round picks, by Position: Outfield

For this series of articles, I’ve been covering players that I like based on their values relative to where they’re being drafted. For the ADP being referenced, I am using NFBC data, from March 11th on, to alleviate some of the news received after the lockout, like some of the injuries (Tatis, Wheeler, and Flaherty to name a few) or trades that have transpired. I’ll also be splitting this up into two sections, players for points leagues, and players for roto or category leagues. I’ll be taking three of each. One player in the top 100, one player after pick 100, and one player past pick 200. This gives you multiple options, one of which can be a primary target, one to be a mid-range guy who’s a nice fallback, and one who you can take past round 15 as the backup's backup plan.

Depth depth depth! There are a million outfielders you can get this season. That being said, in a standard 12 team league, there are typically only three outfield positions in a starting lineup, thus only 36 are started every week. It’s probably somewhere closer to 40 because they’ll fill utility slots, but the point is, this position is as deep as it’s ever been. Outside of the top 40 outfielders in ADP, there are players I’d feel perfectly comfortable with as starters in my lineup. Meanwhile, there are also players that I don’t feel comfortable with as starters there who I want on my team due to the massive upside they have. It doesn’t matter what point of your draft you’re in, there will be some outfielders available for you to draft. Outfield and second base are the two positions I am most likely to wait on in every draft I'm in due to the amount of depth available.

For roto leagues, some players can amass 20 steals while not decimating your batting average available after pick 200. Drafting this position in a 12 team league makes it a heck of a lot easier to fill out your pitching staff, and infield with dynamite players. It also allows you the ability to take a productive and consistent catcher earlier in drafts. In the fighting chance fantasy best ball league I mentioned in the third base article of this series, I didn’t take an outfielder until round 9 which was after pick 100. This position is deep, and there is upside littered throughout the draft.

There are a lot of points leagues specialists available in this format too. A bunch of them are going after pick 200, and there are even multiple guys past pick 300 that I’m loving for this format. I’ve mentioned it in every article of this series, players who can walk, while not striking out a lot, are good players for this format. If they can hit for power, it gives them an even better bonus as well. When talking about catcher, Yasmani Grandal goes from C6 to C2 in my rankings when going from roto to points. Trea Turner goes from the first overall pick, to near the bottom of the first round. It may all be fantasy baseball, but the format of the league is the most important piece of information to know when drafting.

Buxton finally lived up to the hype last year, granted it was only in 61 games, but those 61 games were MVP caliber. 19 home runs, 82 combined runs and runs batted in, 9 steals, and a .306 batting average. Those stats were good for 4.2 WAR, in 61 games. That type of production is unheard of. Now to project him to do that again would be unrealistic, but his 150 games pace would equate to 46 home runs, 22 stolen bases, and 201 combined runs and runs batted in while maintaining the same batting average. That’d put him amongst the best players in fantasy. Buxton seemed to turn a new page in the hitting department, the steals are great sure, but the newfound hard contact consistently was eye-popping. Buxton has the most upside of any player in the major leagues, I’ll gladly take the risk on him as the upside is the number one overall player. Here's Buxton demolishing a home run to dead center with an exit velocity of 111.8 MPH and a distance of 457 feet.

Judge has phenomenal plate discipline, although he strikes out at a high clip, he walks at a high rate as well, making up for those strikeouts. Nobody hits the ball harder than Judge, he led the majors with an average exit velocity of 95.8 MPH according to baseball savant and was 2nd in hard-hit percentage at 46.9% trailing only Fernando Tatis Jr according to Fangraphs. Judge is one of the few players in the majors with 50 home run potential, and while you’re investing a lot in Judge in the third round, the potential is the number one overall player in points leagues. Judge in the third round is the ultimate high-risk high-reward player as he’s exceeded 112 games played just twice in five years. Take a look below at Judge's stacast page and spray chart, he profiles as one of the league's best hitters. 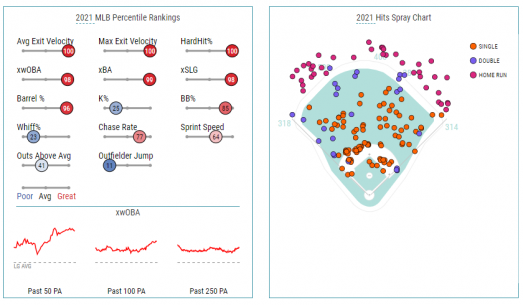 To be honest, I love Grossman in both formats. The plate discipline numbers are phenomenal so he’s a huge asset in points leagues. While he’s not an asset in batting average, he’s one of only 10 players who went for 20 or more home runs, and 20 or more steals. The other nine players are all going within the top 63 picks in ADP, except for Fernando Tatis who will miss the first three months of the season. Grossman may be a bit boring, his statcast page numbers don’t jump off the screen. He doesn’t make a ton of hard contact or have the best-expected stats, but he’s seemed more inclined to pull the ball over the last two seasons, and the results have led to him having career-best seasons. At pick 187, I’ll gladly take a player coming off of a 20 home run 20 steal season.

Renfroe was a strikeout machine who couldn’t hit for much average up until last season. Renfroe’s always been a nice source of power. In the four seasons he’s been a full-time player, he hasn’t hit fewer than 26 home runs in a season, but that was always with strikeouts bringing him down. However, it seems like there was a conscious approach change for Renfroe last season. His plate discipline changed up a lot last season, not necessarily in terms of walks, but his pitch selection. He set career-best marks in Z-Swing percentage (pitches swung at inside the zone), CSW percentage (Called + swinging strike percentage), and contact percentage. With an improved approach, along with the park upgrade, and the raw power, Renfroe could put it all together and be a fantasy stud. Every projection system has him hitting for 30 plus home runs and 150 combined runs and runs batted in.

Pham’s been a pretty reliable source of speed and power for the last five seasons, throwing in two 20 home run 20 steal seasons in there. He has excellent plate discipline, and if he stays in the 95th percentile in walk rate, he’ll be getting on base a ton. Pham had a down season last year, his batting average was .229 which was 29 points lower than his xBA of .258. This had a lot to do with a .280 BABIP, which is 43 points lower than his career .323 mark. I’d expect this to level out this year, and his average to get back to the .250 range at least. Pham played in 155 games last year, he didn’t hit for much power, nor did he steal a lot of bases, but I think he ends up turning that around this year. He was still above average in sprint speed in the 69th percentile and hit the ball hard being in the 84th percentile in hard-hit rate. At pick 263, there aren’t many better options for power and speed than Pham available this late in the draft. Take a look at Pham's statcast page and spray chart, that doesn't look like a player who's washed to me. 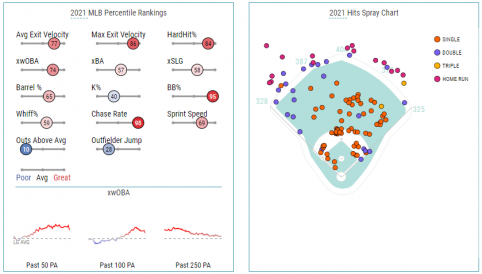 We’re a long way removed from McCutchen being a perennial MVP candidate. Even so, he can still be very useful in fantasy. His phenomenal plate discipline is still strong, being in the 97th percentile in walk rate, and 94th percentile in chase rate. While McCutchen isn’t going to wow you on the stacast page anymore, he’s moving to one of the most hitter-friendly parks in the big leagues. He’s also projected to be the everyday DH and bat fourth, according to roster resource by Fangraphs, in a lineup that is looking to win the NL Central for the second consecutive season. A realistic projection for McCutchen looks like a .240-.250 average, 20 home runs, and 120-130 combined runs and runs batted in, but the upside could be a .260 batting average, with 30 home runs, and 160 combined runs and runs batted in. You’re not getting a player with the pedigree, or upside at this point in the draft at the position outside of Cutch. Here's McCutchen belting his first home run with the Brewers this spring.