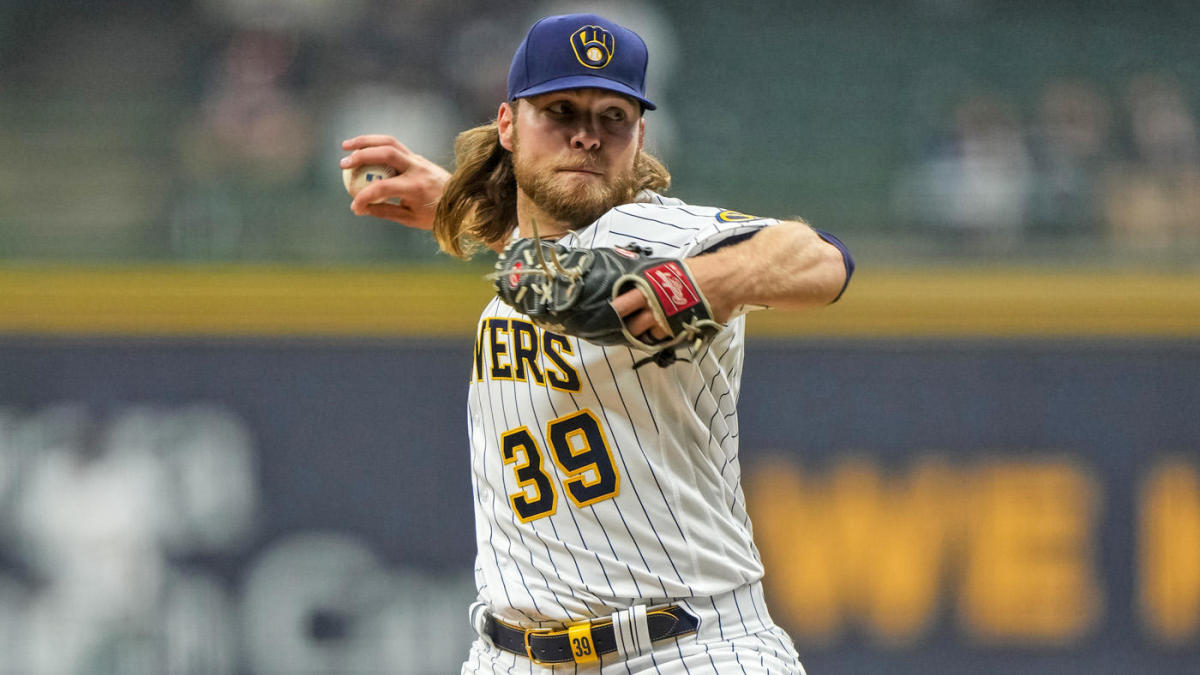 Early, Mid round, and Late round picks, by Position: Starting Pitcher

For this series of articles, I’ve been covering players that I like based on their values relative to where they’re being drafted. For the ADP being referenced, I am using NFBC data, from March 11th on, to alleviate some of the news received after the lockout, like some of the injuries (Tatis, Wheeler, and Flaherty to name a few) or trades that have transpired. In the previous articles of this series, I’ve broken up players into which league format I’d value them higher in. Well for starting pitchers certain players will produce more than others based on format, but for the most part, their values aren’t changing all that much based on format. You still want pitchers who will get wins, and strikeouts, everything else in between can vary so much on a start-by-start basis. So for starting pitcher, I’ll just be giving two early, mid, and late-round pitchers.

Starting pitcher has rapidly evolved. Within the last couple of seasons, we went from having very little starting pitching available late, to now there are guys with a ton of upside past pick 200-300. While I’m still of the mindset that you should use early picks on good starting pitching no matter the format, I acknowledge that if there is a season not to do that, it is this season. Some players can be viable top-12 starters past pick 50, hell, the American League Cy Young winner from last season is currently going at pick 50 in drafts as of today! There is so much depth in this position, and it’s not top-heavy at all. While I’ve said in previous articles of this series that second base, shortstop, and outfield were the deepest positions, I don’t think I was incorporating just how deep starting pitcher is this season.

The position of starting pitcher will always come with inherent risk. One-third of all MLB pitchers have had Tommy John surgery already, the majority of them are starting pitchers. It makes for a scary investment early in your draft. However, when I’m drafting I tend to not incorporate injury concerns into the cost. I tend to draft players whose skill sets I believe in, and hope there are no injuries that plague those players. In general, this strategy has seemed to work for me in years past, often when you have these players and they do get injured, you can slot them into an IL slot and use that extra roster space to receive a 2-1 trade offer, or use it as some flexibility on waivers. In fantasy sports, having an extra roster spot adds flexibility, something that oftentimes is not valued the way it should be.

Morton had a rough start to last season. Through May he had a 4.26 ERA and a 1.30 WHIP, it seemed as though the age may have finally caught up to Morton. Well, that was wrong for sure! When you were looking at Morton’s peripherals he was still pitching great, and everything regressed to where it needed to be in the second half of the season. After that rough first quarter of the season, Morton ended with a final line of 14 wins, a 3.34 ERA, a 1.04 WHIP, and 216 strikeouts over 185 ⅔ innings pitched. That type of production is phenomenal, and all of Morton’s expected stats line up with what he put onto the field and stat sheet last year. Morton’s easily one of the best starting pitcher values right now. Below is one of my favorite clips from any baseball game ever, Charlie Morton striking out 2 batters, on a broken leg, in the world series.

Season after season Rodon disappointed White Sox fans. The lowest ERA he ever had was 3.75, and that was in only 26 games (23 starts) during his rookie season. Past that, it’s been inconsistent performance, and injury-plagued seasons year after year. It looks like things turned for the better last season. Now he did get injured again, so there is some risk baked into drafting him, but as I stated before, I don’t incorporate injury concerns into the draft cost. I want the most talent, and the best production I can get, and there may not be better production available than Rodon. Rodon’s final line was 13 wins, a 2.37 ERA, a 0.96 WHIP, and 185 strikeouts over 132 ⅔ innings pitched. Rodon was excellent last season, and gets a nice park upgrade, to a team that maximizes everything they can out of players in San Francisco. Take a look at Rodon's expected stats, everything that he did last season, seems legitimate. 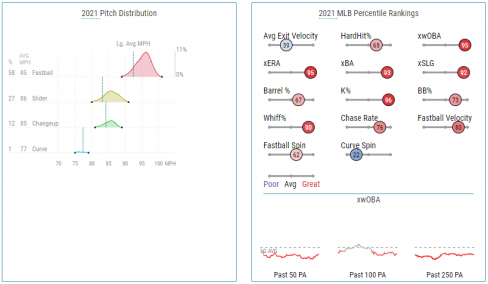 Clayton Kershaw has been the best pitcher in baseball for the past decade, and if you want to argue it, take a look at his Fangraphs page. In the last 12 years, only twice has he had an ERA over 3.00, and one of them was a 3.03 ERA, the other was last season. Now, this may leave cause for concern with Kershaw being that he posted his career-high in ERA for a full season last year, but I don’t view it as such. Kershaw’s peripherals were still really good posting a 3.00 FIP, 2.87 xFIP while being 97th percentile in walk rate, 94th percentile in whiff rate, 90th percentile in chase rate, and 85th percentile in strikeout rate and xERA. Even with Kershaw having what was probably a career-worst season, he still ended with a line of 10 wins, a 3.55 ERA, 1.02 WHIP, and 144 strikeouts over 121 ⅔ innings pitched, which would be great production from the 42nd starting pitcher off the board. Kershaw signed a one-year deal with the Dodgers, I think he’s going to try and show them why they should sign him for the rest of his career as there still seems to be plenty left in the tank for him. Take a look below at Kershaw's FanGraphs page, showing just how consistent he has been for the last 13 years.

Ranger Suarez had a 1.36 ERA over 106 innings pitched last year. A 1.36 ERA, you read that correctly. Why he’s going at pick 183, makes no sense to me. Did he overperform with that ERA, absolutely, but even if he regresses to what his peripherals suggest, he should still sit somewhere in the 3.00 ERA range, that’s great value as the 50th starting pitcher off the board. While there’s not a lot of swing and miss in Suarez’s profile, he does an excellent job at limiting hard contact. He’s a heavy sinkerball pitcher, throwing that pitch 45.5% of the time and generating a high ground ball rate because of it. Of pitchers who threw at least 100 innings last season, Suarez ranked 5th in ground ball rate at 59.2%, and 6th in hard-hit rate at 26.0%. What that means, is he induces a lot of weak ground balls, thus limiting the number of home runs he’ll give up. Drafting Suarez as a fourth starting pitcher on your roster seems like a no-brainer, and I really can’t comprehend why he’s getting pushed down so far in drafts. I love the value here. Take a look at Suarez's pitch distribution and statcast page. 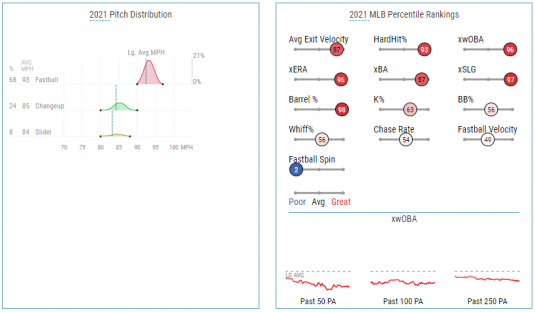 I asked on Twitter the other day, “who’s one player you can’t quit?” I got some interesting responses, but for me, that player is Stephen Strasburg. The stuff has always been electric, and dating back to his last full season, which was 2019, he was still great. He posted a 3.32 ERA, with 18 wins, a 1.04 WHIP, and 251 strikeouts over 209 innings pitched. This pick seems to be more of a leap of faith pick. His only concern is injuries and he’s starting the season on the IL which isn’t a promising sign, but he’s an easy stash for me. There are not many players past pick 300 with the upside to provide a line of a 3.50 ERA, 160 strikeouts, and a sub 1.20 WHIP, even if the wins are low for a team who’s in rebuild mode. While 2021 was a disappointing season, Strasburg's stuff still looked good at times. Here's a clip below of pretty much everything he was able to do in 2021.

Hunter Greene is the number one prospect for the Reds. He’s got a huge fastball, grading 80 out of 80 according to Fangraphs, and MLB.com. He has an upper 80’s slider as well, which grades 60 on Fangraphs, and 55 on MLB.com. He cruised through the double A level, going 5-0 with 60 strikeouts in 41 innings with a 1.98 ERA. Greene’s potential is an ace-level starter. While I’m not a huge fan of the ballpark in Cincinnati, it looks like he’s made the opening day roster. The Reds are looking towards the future, and Greene certainly looks to be in the centerfold of that mix. Now we know how prospects can tend to struggle when they first come up, so Greene is someone to be patient with, but that big fastball should translate to the major leagues, and he displayed an ability to keep it low in the zone and generate some ground balls. Be patient with Greene, he’s well worth a flier regardless of league depth and format. Here's a clip from Greene's eight strikeout performance from his first game in triple-A last year.

Thanks for following along with my value articles by position! Find me on Twitter @RotoTeddyG for more of my content!