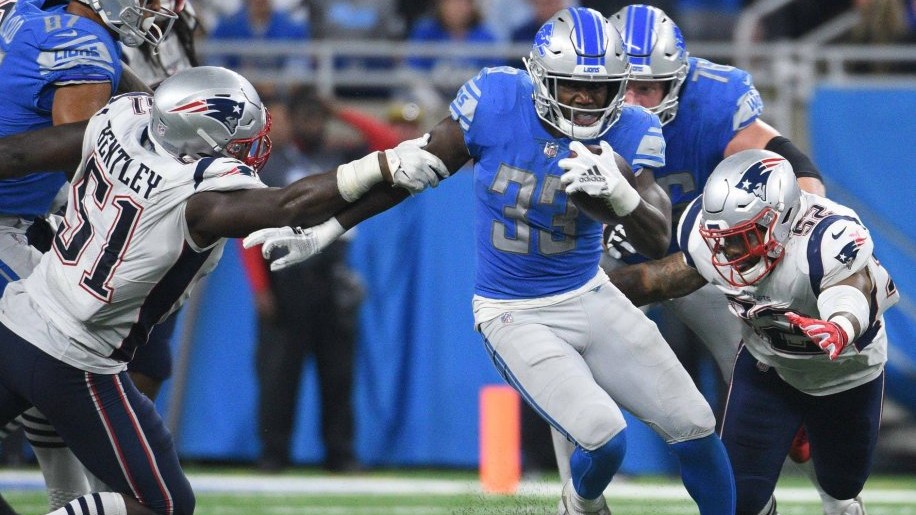 When evaluating which running backs you want to select in your upcoming fantasy draft, it’s always wise to consider the player’s talent independent of scheme, the play caller and the player’s supporting cast. One way to measure the talent of a running back is to evaluate yards gained after initial contact. A great offensive line or a great play caller can make an average runner look great, but when you have a player that has the ability to create yards on his own, it means that the player is more likely to produce even if their offensive line unit suffers injury during the season.

Nick Chubb (4.47) and Derrick Henry (4.21) had the highest average yards after contact in 2018 and while this may look very appealing upon first glance, you need to consider that although those runners are very good after contact, their numbers were a little inflated due to 90+ yard runs. This isn’t a red flag, it’s just something you need to file away.  Roger Saffold was added to the Titans offensive line via free agency which should improve the Titans line play from 2018.  Derrick Henry is a downhill runner and once he gets going he’s hard to stop and if the Titans commit to Henry as their main ball carrier he will be a major fantasy force in 2019 especially with the improved personnel on the offensive line.

Chubb averaged 5.2 yards per carry in 2018, of which 4.47 came after initial contact. The Browns did lose Kevin Zeitler via trade to the Giants but Baker Mayfield is looking to make a second year jump at QB and with the addition of Odell Beckham Jr., Chubb should see less stacked boxes this year. The presence of Kareem Hunt on the roster, however, is concerning, and if you don’t want to pay the late 2nd, early 3rd round ADP, you should look elsewhere because Chubb may not pay many dividends after Hunt returns from his 8 game suspension.

In 2018 Zeke Elliott ran for 1,434 yards, 949 of which came after initial contact. Zeke gained an average of 4.7 yards per rush, 3.12 of which came after contact. In evaluating Zeke Elliott for 2019, analyzing how his yards were gained is key because the Dallas offensive line opened up just over 1.5 yards per carry for Zeke before he saw first contact. Enter Travis Frederick back into the fold for the Cowboys offensive line and Zeke will have even more room to operate in 2019. Similarly, Saquon Barkley ran for 5.0 yards per carry, 3.34 of which came after initial contact. The Giants did added Kevin Zeitler to their already solid offensive line which should mean Saquon will add to his 1,307 rushing yards from a year ago.  You cannot go wrong with either Zeke or Saquon with the first overall pick.

Out of all the running backs that played at least 25% of their teams snaps in 2018, David Johnson and Leonard Fournette had some of the lowest average yards after contact in the NFL. David Johnson ran for a subpar 3.6 yards per carry in 2018 and 2.38 yards after initial contact. While Johnson’s yards after contact numbers aren’t terrible, they aren’t great either. In evaluating whether you want to draft David Johnson, you need to ask yourself what the Cardinals have done in the offseason to improve Johnson’s yards before initial contact numbers….and to me I don’t think they have done a whole lot. Their offensive line will still be fairly poor, but the addition of Kyler Murray playing in the Kliff Kingsbury spread offense may open things up for Johnson a little, at least that is the hope. Personally, I am going to stay away from David Johnson in 2019 unless he drops into the middle of the second round, and I will continue to stay away from Johnson in the first round until the Cardinals make major upgrades to their offensive line. I understand there is a new QB and play caller in Arizona, but you still need to block to create yards. Johnson does, however, offer tremendous value in the passing game, so if you think he can get near 1,000 receiving yards, poor offensive line play may not matter as much.

Leonard Fournette is coming off a season where he gained a mere 3.3 yards per carry, of which 2.35 were after contact. Although he is coming off a very disappointing season, there are several signs pointing to 2019 success. The Jaguars hired a new offensive coordinator in John DeFilippo this past January and they signed Nick Foles to play QB and drafted offensive lineman, Jawaan Taylor.  All of these moves should help Fournette rebound and have success in 2019, we just need to monitor what he does (or doesn't do) in training camp and of course pray he stays healthy.

Alvin Kamara ran for 4.6 yards per carry and 2.75 after contact, gaining a total of 883 yards on the ground in 2019.  Although those numbers don’t necessarily jump out at you, you cannot deny Sean Peyton’s ability to call a good game, Kamara’s ability to make big plays in the passing game and the fact that the Saints have a tremendous offensive line.  Kamara is a stud that is perceived to be a change of pace back, but in reality, he can run the ball and create for himself.

Todd Gurley (3.21) and James Conner (2.87) are solid late first round or early second round picks as they play with solid QB’s and run behind solid offensive lines in great offenses.  You shouldn't hesitate at all drafting Conner, and as long as reports are solid on Gurley's knee throughout training camp, he should be a fine late first round pick as well.  If you feel bullish about Gurley's knee, scoop him up at a discount while you can, because if reports out of Rams camp are glowing this summer, his ADP will surely shoot up to the top 5.

Kenyan Drake (2.68), Tevin Coleman (2.91) and Marlon Mack (2.84) all have big play ability and play behind solid offensive lines, but it’s yet to be seen if these guys can handle a workload that would allow them to put up RB1/RB2 numbers on a week to week basis throughout the season, making them somewhat risky plays. Marlon Mack is the riskiest play out of these three because he has been going in the third round of drafts, making him the most expensive.  Drake and Coleman have been drafted around the 5th round which makes selecting them a little easier to stomach.

I don’t want to be Mr. Obvious here, but Le’Veon Bell was out of football for all of 2018 and the last time he played, he ran for 2.6 yards after contact behind a great offensive line, with a HOF quarterback, and great supporting cast. Bell now goes to the Jets where he will be asked to be the focal point of their offense, with a 2nd year QB, a subpar offensive line and an adequate at best WR group. Needless to say, I think Le’Veon Bell may have a season similar to David Johnson’s 2018 campaign where he struggles in the running game but excels catching the ball.  Bell has been going in the middle of the first round and personally, I will pass on him at that price for somebody that didn't sit out 2018.

Mark Ingram averaged 3.2 yards after contact in 2018 and he will be playing for the Ravens in 2019 who feature a run heavy attack. Ingram will now be running behind an offensive line that allowed Gus Edwards to run for more than two yards before he was touched in 2018. This alone makes Ingram very appealing, especially at his current ADP of the 4th round. The Bears offensive line only opened up one yard before contact for Jordan Howard last year but he did manage a respectable 2.74 yards after contact. The Eagles offensive line opened up about 1.4 yards before contact for the likes of Jay Ajayi and Josh Adams last year, so I really like Jordan Howard to bounce back a little bit in 2019 and take his yards per carry back over 4.0, but we need to pay attention to the Eagles RB situation throughout camp because there is a lot of competition there.

Several other players that played at least 25% of snaps ran for 2.0 to 3.0 yards before they were touched by opposing defenders. Included in that group from 2018 are Christian McCaffrey, Joe Mixon, Melvin Gordon, Gus Edwards, Aaron Jones, Phillip Lindsay and Kerryon Johnson. Christian McCaffrey is perhaps the most elusive runner out of this bunch, but for the most part, you need to keep an eye on these running backs’ offensive lines in 2019, because if they suffer injuries up front, they may not have the same success they enjoyed in 2018.  Aaron Jones seems like he is constantly hurt and was suspended for part of 2018 making him a somewhat risky play.  Melvin Gordon has been killing it the last few seasons, but he himself has had injury problems making him a risky draft pick in the middle to late first round.

The Bengals have moved on from Marvin Lewis and welcome in Zac Taylor, a young offensive mind, to change things up and march into 2019 with a more dynamic offense. Joe Mixon averaged 4.9 yards per carry in 2018 and gained 2.76 yards after initial contact. Although the yards after contact numbers don’t necessarily jump off the paper at you, it needs to be considered that Mixon put up those numbers without AJ Green or Billy Price playing for much of the year. With both Green and Price returning, along with the addition of Jonah Williams to the offensive line, Mixon is primed for a breakout, as if he didn’t already, coming off a 2018 season where he deceptively led the AFC in rushing with 1,168 yards.

Kerryon Johnson and Dalvin Cook both averaged over 3 yards per carry after initial contact in 2018, and both missed time due to injury, which is going to cause each of them to float somewhat under the radar in 2019 drafts because they haven’t fully broken out yet. Dalvin Cook has been getting drafted around the middle of the second round while Kerryon Johnson has been going around the fourth round of drafts.  The Vikings added offensive lineman Garrett Bradbury in the draft which should really help their front and the Lions plan to pound the rock with two tight end sets under new offensive coordinator Darrell Bevell which bodes well for Kerryon Johnson and Dalvin Cook’s fantasy value.

When it's all said and done, the yards after contact data shows us what we already knew, that Zeke Elliott and Saquon Barkley are certified studs who are deserving of the first overall pick in your draft, but it also shows us that guys like Dalvin Cook, Kerryon Johnson and Mark Ingram may be capable of big time numbers if they are able to stay healthy for the entire 2019 season and assume a majority of the snaps in their respective backfields.  As I mentioned before, this data makes me want to stay away from David Johnson, because it indicates he needs major volume to gain any significant yardage on the ground, so unless he catches 100 balls this year, I don't like his fantasy outlook for 2019.