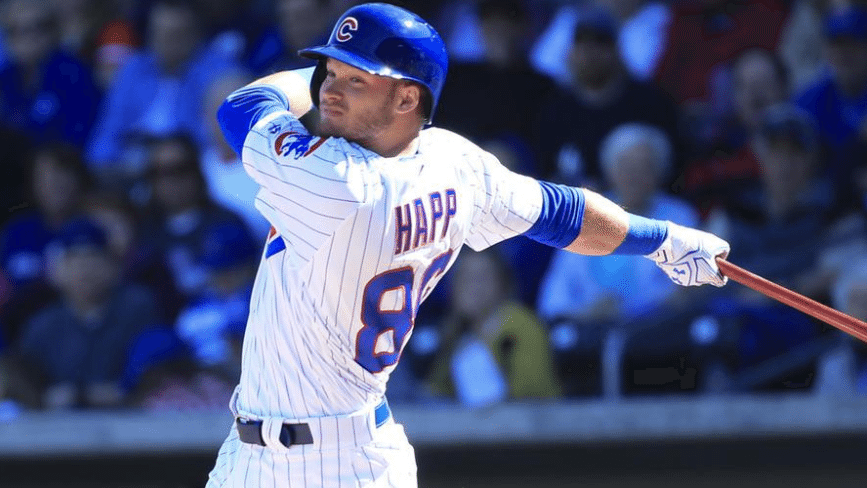 Ian Happ, 2B/OF Chicago Cubs. Brought up as an injury replacement, Ian Happ has done nothing but rake. As long as he continues, John Jay looks be the victim of playing time cuts. Fans of the Cubs should be overjoyed that the team is starting to win, and Happ has been one of the key reasons behind it. Batting either clean-up or in the fifth spot of the Cubs batting order after Kris Bryant and Anthony Rizzo, Happ is seeing all the pitches that starting pitchers try to avoid throwing to those two All-Stars. Multi-position ability is another great factor when slotting Happ into your line-ups, as he is covering 2B/MI/OF and utility in NFBC line-ups. Happ is currently hitting .294, almost matching his Triple-A batting average of .298. It’s his 15% walk rate so far that’s really impressive, and while is .353 ISO and .400 BABIP will not last, we know he is still producing at his minor league level thus far, and that’s a very good thing.

The Nats bullpen has been a mess this season and hopefully Koda Glover can bring some stability to it.

Koda Glover, RP Washington Nationals. Leave it to Dusty Baker to make every pitcher on his pitching staff, fantasy relevant. This morning, Baker named Koda Glover as the Nationals’ new, ninth inning guy. Glover owns a 2.57 ERA and 1.00 WHIP in the 14 innings he’s pitched this season, with an 11/2 K/BB as well. Glover is now must own, and until he proves otherwise, looks to hold down the ninth inning role. For Glover to become that elite level ninth inning man though, we will need to see a dramatic improvement in his K/9, which currently sits at 7.07. Glover’s minor league numbers do bring hope to his cause, when in Single-A, Glover was up to 16.50/9 strike-out rate, so let’s give him a chance since he’s just turned 24 years old. 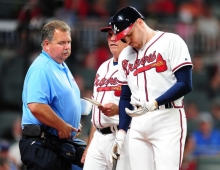 Freddie Freeman's injury not only hurt him, but also the many people who invested a high fantasy pick on him.

Freddie Freeman, 1B Atlanta Braves. This is the most obvious “Stock Down” ever. After taking Freddie Freeman in the second round of my NFBC Draft, (after selecting Anthony Rizzo in the first), I had locked up two of the best, young corner infielders in the draft. Now I’m pulling out Jobu, and sacrificing Kentucky Fried Chickens for a quick and healthy return and praying I can stay in the top five as I have been all season. This DL stint will affect every owner who was fortunate, or unfortunate enough, to draft him, and the Braves will miss Freddie sorely. Jace Peterson in not even worthy of the same awesome breath in which we all whispered, “Crap” when the news of Freeman’s injury, and subsequent DL time, broke. We now have ten to 12 weeks to suffer this elite loss and hope our rosters can pick up the slack until Freddie returns to us, and then likely a few weeks more after that to catch up to game speed.

Tanner Roark, SP Washington Nationals. Ok, Dusty tried to make all of his pitchers fantasy relevant, but Roark is just spitting in his face with what he has been doing on the mound so far this season. He may have turned a corner last night in Seattle, after going seven strong innings of one-run ball, but I’m not holding my breath quite yet. Before last night, Roark has been awful, especially against left handers to whom he has given up six home runs. Carrying a 4.32 ERA and WHIP of 1.32, leaves plenty of room for improvement for the first place Nationals. Washington needs Roark to get those numbers down to keep their foot across the throat of not only the division, but the entire National League. Roark’s hard hit percentage has jumped three points this year from his career average of 24.5%, and is up to 27.6%. The time is now for Roark to steady the ship and be the reliable number three starter the Nationals rotation needs behind Max Scherzer and Steven Strasburg.

You can always reach me @PolkaPat for anything fantasy related and be sure to read more of my rantings at Mastersball.com