Drafts are largely completed, and we're hours away from the week 1 kick-off.  The vast majority of fantasy players are just waiting for the season to start.  If you're like us, you're not satisfied and you want to be a week ahead of next week's waiver gems by having them on your roster already. Here are five quick names you should look to add, or at the very least get them on your watch list.  We're now in weekly mode and it's time to rise and grind! As a quick reminder, we are looking at players rostered in about 40% or less of leagues and yes, we realize not all of these players are available in your specific league.

Death. Taxes. Second-tier veteran fill-ins at RB in Baltimore.  We've seen this before with Latavius Murray and Devonta Freeman.  Enter Kenyan Drake, the 28-year-old back who is coming off an ankle injury last season. Before the injury, Drake managed to catch 30 of 40 targets for 292 yards and 1 touchdown. Drake ranked 6th in yards per route run on a minimum of 30 targets, making him potential PPR gold if JK Dobbins and Gus Edwards are limited during the first part of the season. Drake is most likely a four-week RB fill-in, but if your RB2 in a zero-RB build is suspect, get Kenyan Drake on your roster. 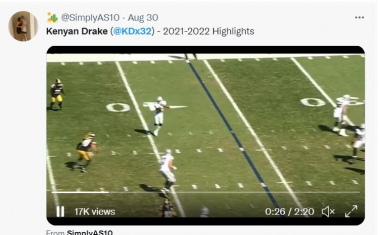 Two pieces of information that weren't covered much this off-season with the Steelers are 1.) RB Najee Harris had been nursing a Lisfranc injury throughout training camp. 2.) The Steelers released their depth chart on 9/5/2022 with Jaylen Warren as the second-string RB. Those who struck waiver wires pre-season in 2018 for James Conner, another quiet player that earned Tomlin's trust, take notice.  Najee Harris has documented chronic foot injuries, and Warren has looked good with tough running and a skillset that pleases Coach Tomlin.  If there's a must-grab player out there in any format today, it's Jaylen Warren.

The Penn State standout seems to have built a quick rapport with Carson Wentz. Commanders beat reporters have been showering praise on Dotson.  The NFC East could lowkey be a shootout division, with added fire from AFC South games.  Yet this year's 1st round WR Jahan Dotson has largely been overlooked. Maybe it's the team name.  Maybe it's Wentz.  Maybe it all doesn't matter if we end up with this year's Hunter Renfrow: a potential PPR WR1 who is on the field often, peppered with targets.

Finding pieces of good offenses at a value is a cornerstone to fantasy football success. The Cardinals in 2022 ranked 10th in points per game, and 9th in both yards and touchdowns per game.  Rondale Moore steps into the slot role vacated by Christian Kirk's departure to Jacksonville.  Kirk had a 77/982/5 line, and similar outcomes could be expected with Moore.  If you believe coach-speak, Kliff Kingsbury has been beating the drum all off-season that he wants Moore to be "more involved," pun unintended. If you want a piece of a top 10 offense to sure up your bench, you could do more for your team by adding Rondale Moore, pun 100% intended

History tends to repeat itself.  The Chargers have always been a proponent of TE usage in the "West Coast Offense" style of play.  The coaches and players may change over the years, but the sentiment remains the same.  Antonio Gates for what seemed like decades was a stellar option at the position. Justin Herbert targeted the TE position at a 21% rate last season on an offense sure to be scoring points in droves again this year.  Everett unfortunately still has that Pike Place Market smell on him to most leagues and can be your fresh catch at TE now, before everyone else goes charging for him in the next few weeks.

Sometimes the best pick-ups occur before the season starts.  Good luck, and follow our great stable of writers at Fighting Chance Fantasy to keep your team at the front of the pack this season!