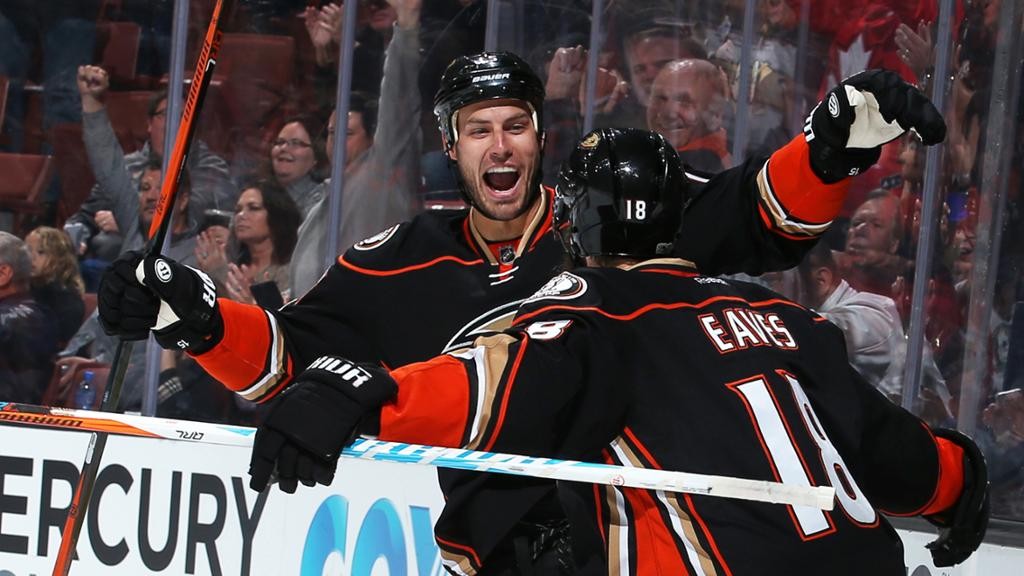 The Anaheim Ducks are one team that has drafted extremely well and hasn’t really lost a step since their 2007 Stanley Cup Championship. Their young core of forwards are finally catching up to the once dominate Corey Perry and Ryan Getzlaf. And this group along with a trifecta of good, young defensemen, I’m sure Anaheim will be back for another deep playoff run in 2018. With Edmonton on the way up, and San Jose and Los Angeles on the way down, Anaheim is standing pat as the steadiest team in the Pacific Division. Finishing with 105 points and winning the Pacific Division, the Ducks lost in the Western Conference Final to the Nashville Predators last season, and were 3rd in Goals Against as well.

Each team I cover is going to have the relevant fantasy players for our needs, if you need advice on players for 16-20 team leagues, feel free to contact me @PolkaPat for all your draft advice, or in the comment section.

1) Rickard Rakell (Age: 24, Center): Rakell should take over the offensive reins from Perry and Getzlaf by seasons end, and will be one of the leaders of the Ducks heading into the next decade. Elevating his point total in each of his first three seasons, as a young fledgling, this Duck will spread his wings in the 2017/18 season. He could breakout out to the tune of 70 possible points after jumping from 43 points to 51 this past season, and let’s not forget his ten game-winning goals last year either. Projection: 31g, 41a, 72 pts

2) Ryan Getzlaf (Age: 32, Center): Ryan Getzlaf is the serving Captain of the Ducks and is the perfect example of a team leader for the younger players on the Anaheim roster. After dropping below 70 points in 2015, he returned with 73 points this past season and I see him producing similar results in 2017. Always a great passer, Getz should once again lead the Ducks in assists this year. Projection: 13g, 59a, 72 pts

4) Jakob Silverberg (Age: 26, LW/RW): Taking an offensive step in the right direction for the Ducks this past Stanley Cup playoff run, Jakob Silverberg scored nine goals and 14 points in 17 games. I’m looking for some more offensive growth in 2017 as Silverberg is heading into his prime years. Projection: 25g, 30a, 55pts

5) Corey Perry (Age: 32, RW): 19 goals is not what I think of when I hear the name Corey Perry, Personally I want to cave his face in with a plethora of rights, but fantasy wise he is a beast. I’m hoping for the Ducks fan base, he returns to his old reliable ways of 30-40 goals again, and he will be drafted as a sleeper this season after last year’s offensive let down. Projection: 34g, 29a, 63pts

6) Patrick Eaves (Age: 33, LW/RW): A career third-liner, Eaves all of a sudden found his sniper rifle and benefited greatly from the line-mates he was cast with. Potting 32 goals last season, 13 with the man advantage, Eaves previous career high was 20 markers in his rookie year in Ottawa back in 2005-06.  He started out in Dallas and was traded to the Ducks before the deadline, to provide secondary scoring. Mission accomplished. Draft cautiously however, as a 33 year old player doesn’t usually get better unless he is Barry "HGH" Bonds, but he does have a chance with Kesler on the shelf.  Projection: 26g, 20a, 47pts

7) Nick Ritchie (Age: 21, LW): In his first full season, the rookie provided expected numbers, while grasping head coach Randy Carlyle’s system. 14 goals and 14 helpers along with 247 hits made Ritchie good in deep leagues last season. Look for an all-around offensive step up from him this year playing second and third line minutes, 12.59 per game last year. Projection: 20g, 21a, 41pts Look for Cam Fowler to be a great source of fantasy points and he's just coming into his prime!

1) Cam Fowler (Age: 25): There were plenty of trade rumors about last year, with Fowler's name being bandied about frequently...good for the Ducks for keeping this core together.  If they’re as smart as I often say they are, this group will anchor the Anaheim rearguards for the next decade. Look for this Duck to take the reins as the leader of this group and offensively provide us more of a fantasy punch this season, especially after inking an eight-year, $52 million dollar deal. Projection: 14g, 37a, 51pts, 149 Blocked Shots

2) Sami Vatanen (Age: 25): After an offensive let down last season where he should have made the jump to next level production, Sami Vatanen first needs to play a full season, as he's never gone more than 71 contests. After dropping 14 points from the previous season, Sami should get back into 45 point form this year, and after the Ducks shipped Shea Theodore to Vegas to save Vatanen the trouble of packing, he owes them some big time production. Projection: 17g, 29a, 46pts

3) Hampus Lindholm (Age: 23): The youngster of this youthful trio, Lindholm as with the rest of the Ducks, need to score more. That means shooting more than 94 attempts for a guy who averaged 22.27 minutes per game. If he continues to develop along with partner, Josh Manson, the Ducks will continue to have two great, reliable sets of defensemen. Projection: 12g, 20a, 32pts

1) John Gibson (Age: 23): After settling into the starting role, John Gibson played 52 games, starting 49 of the Ducks regular season contests. Gibson is now one of the rising stars in the NHL goaltending ranks with a 25-16 record last year and six shutouts. Gibby finished fifth in Save Percentage with .924% and fifth in GAA as well with a 2.22. I look for him to start between 55-62 games this season, and new back-up Ryan Miller should fill in admirably. Gibson is a top-ten net minder, and should be drafted accordingly. Projection: 35 wins, 18 losses, 8 shut-outs