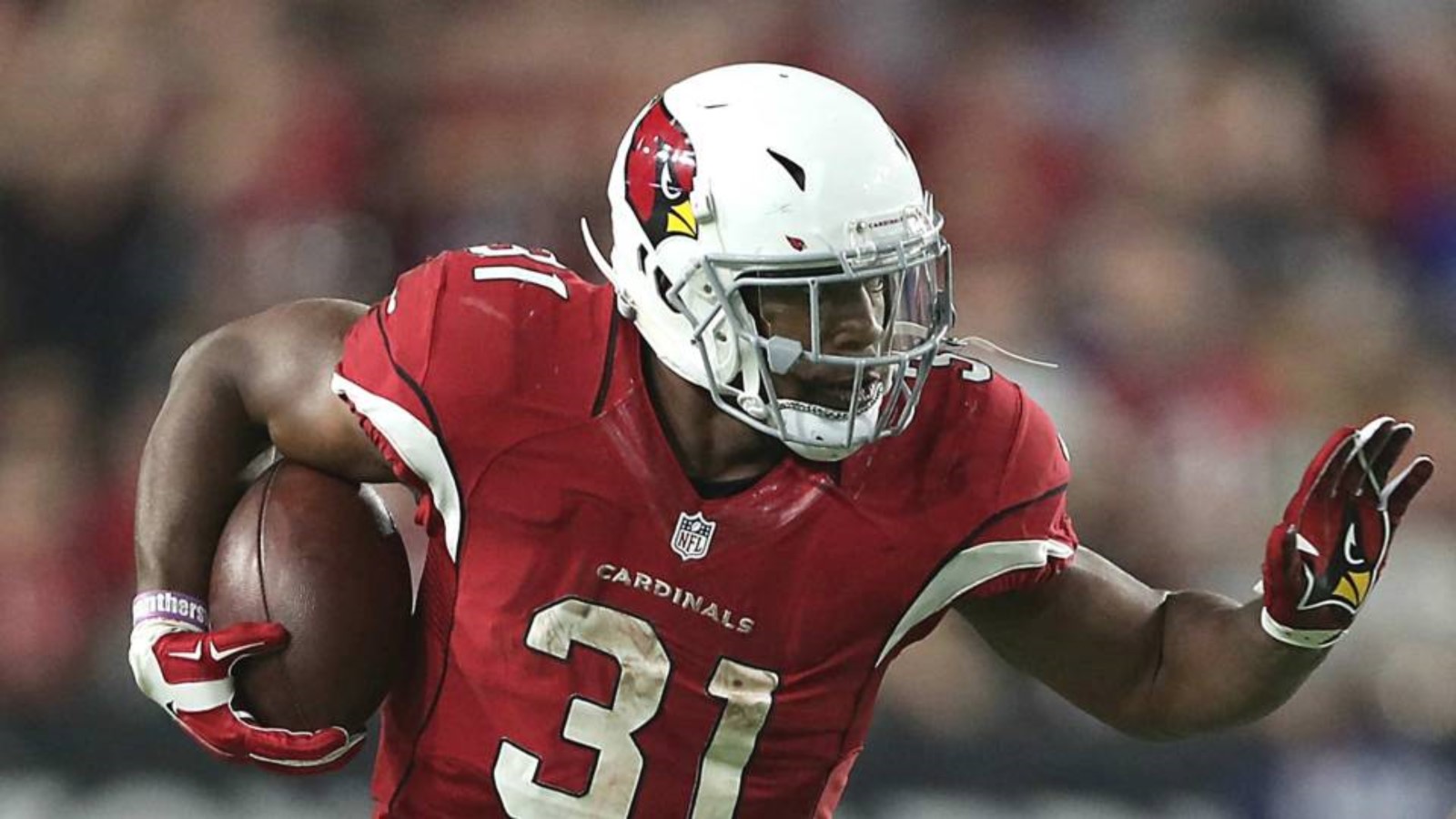 Fantasy Roundtable: Who Should Be #1?

Throughout the preseason we will be publishing questions that we think fantasy players are pondering every day as they are getting closer to draft time. But instead of just having our opinions, we are asking some of our friends in the industry to try to help us out by giving more opinions to these questions so our fantastic readers have as much information as possible when forming their opinions.

Today's article will be one right at the top. This question is for those of you who are lucky enough to get the number one overall pick. You'd think this would be easy, but it isn't. Multiple players are worthy of being the first one off the board. So, without further ado, let's get to it!

In PPR leagues, who should be the Number One Overall Pick? Todd Gurley, Le'Veon Bell, David Johnson or Ezekiel Elliott?

Any one of the players listed can finish as the top back in 2018 but my bet is Todd Gurley.  Gurley dropped off in 2016 after a very solid rookie season, but the addition of Head Coach Sean McVay did wonders for the Rams’ offense in 2017. In fact they scored the most points in the league and Gurley led all backs in total yards from scrimmage with 2.093. He also had 19 TDs to lead all backs on 343 touches. In fact he scored over three points more a game than Le’Veon Bell who finished second in average points per game.  With QB Jared Goff showcasing the talent they thought he would have when they drafted him No. 1 overall in the 2016 draft, I expect this offense to be even better in 2018.

Todd Gurley. It’s amazing how quickly things change in the world of Fantasy Football. Last season I was avoiding Gurley in drafts, and this season I’ll be taking him with the first overall pick in my Scott Fish Bowl league (#SFB8) draft. He meets all of the categories I like in a running back. He’s young, plays behind a solid offensive line and is a featured part of his team’s offense. The current Rams' coaching regime knows how to get the most out of their young talent, and wisely took advantage of his ability to catch the ball out of the backfield last season and that should carry over into 2018.

I don’t like to take any risks with my first round picks and although the other three choices are solid and should have big seasons, each comes with a question mark.

Although Le’Veon Bell is just 25 years old, he has a lot of mileage on those legs. In addition, he is likely to sit out his second straight training camp. Players who skip preseason workouts have a knack for developing injuries, and Bell got off to a slow start after missing training camp last season. David Johnson may also hold out and skip training camp. After missing 15 games last season, that has me concerned.

Ezekiel Elliott led all running backs in yards-per-game last season, but without Dez Bryant and Jason Witten around, will defenses key in on him and force Quarterback Dak Prescott to the throw the ball more? Despite these concerns I’m not avoiding Bell, Johnson and Elliott, but if I have the number one overall pick, it’s Gurley for me.

I’m going to be completely honest. I’ve flip-flopped several times over the past few months about who I would take with the number one overall pick in PPR leagues. With roughly two months to go before the beginning of the 2018 season I may change my mind again, but as of right now, David Johnson is the guy at the top of my list. I’m expecting the hate tweets from the Todd Gurley, Le’Veon Bell, and Ezekiel Elliott fans to commence shortly…

I prefer David Johnson over the others for a few reasons. First, looking back to 2016, Johnson was the number one overall back in fantasy, scoring 407 fantasy points in PPR leagues. Ezekiel Elliott was second with 325 fantasy points, followed by Le’Veon Bell with 317 points. No other back scored over 300 PPR points that season, so Johnson was in a class all by himself. Last season, only Todd Gurley (383), Le’Veon Bell (341), and Alvin Kamara (314) scored over 300 PPR points. Johnson has the upside to dominate the PPR format.

Johnson is only 26 years old, has only 429 career carries, and after missing virtually all of the 2017 season, he doesn’t have much wear and tear on those legs. While he missed last year with a wrist injury, this shouldn’t be something that carries over into the 2018 season like a knee or ankle injury could. I do realize that their offensive line isn’t the greatest and they aren’t that good of a team so they may not be in rushing situations as much as they have been in the past, but I think that only helps his reception totals and I can easily see him finishing with 80+ receptions and close to 15 touchdowns. I would bump him down a couple of spots in standard leagues, but if you play in the PPR format, feel confident that David Johnson will be a stud in 2018.

It definitely feels like splitting hairs at the top of the running back position; however, I’ll be drafting Le’Veon Bell as my #1 overall PPR running back this season. First, the sheer amount of times Bell touches the football is ridiculous. Last season, he carried the ball a whopping 321 times (30 times more than the next closest) and received 106 targets (beat only by Christian McCaffrey with 113). We know opportunity and volume are gold in fantasy and you can’t ask for better numbers than that. To give you an idea of how much the Steelers use (and will continue to use) Bell, look no further than 2016. He played in just 12 games and was still #8 in amount of carries and received 94 targets. Bell averaged 27.5 touches per game during fantasy regular season in 2017, and that was with a 13 touch outlier included.

Second, players should expect Todd Gurley’s numbers to regress some in 2018, opening the door for Bell. Gurley scored 16 touchdowns in 2015 and 2016 COMBINED, with zero being through the air. Last season, this skyrocketed to 20 (six via the air, 14 on the ground). In 2015 and 2016, Gurley averaged 9.0 and 7.6 yards per reception, respectively. He averaged 12.3 yards per reception in 2017. The addition of another weapon in Brandin Cooks only strengthens my case that these numbers aren’t sustainable. I’m much more confident in Bell’s consistency, snagging 9 and 11 TDs in the last two seasons and averaging 8.2 and 7.7 yards per reception as well. Bell finished in the top three in 2016 and 2017 and it’s time for his first #1 PPR finish since 2014.

Lastly, no I’m not worried about a possible holdout negatively impacting his performance. Bell held out last season and struggled a bit in the first two games (ending #13 and #17 PPR RB), but then finished with 10 games in the top 10 (seven being in the top five) and 12 games in the top 13. Holdout or not, he’s my #1.

All four of these guys would be great options for a first overall pick. However, if I am picking number one I want what I think is a sure thing. Not that any of them are bad, but I think that Todd Gurley is the choice. Ezekiel Elliott is an absolutely great back, but in a PPR league he loses a little value because he catches the least number of passes out of this group by a mile. David Johnson is a total monster, but he is coming off a season lost to injury and the team likely won’t have much of a passing game to keep defenses honest.

Le’Veon Bell is the guy I would consider first overall, and the only issue I have with him is that he is going to hold out for the second straight season, and likely won’t have much training camp. He also has been suspended by the league multiple times and one more misstep would be a long suspension. Some might cite Gurley’s sub-par sophomore season, but that was under a different coaching staff and offensive scheme. He is the focus of the Rams' offense and I believe he should be the number one pick in PPR leagues.