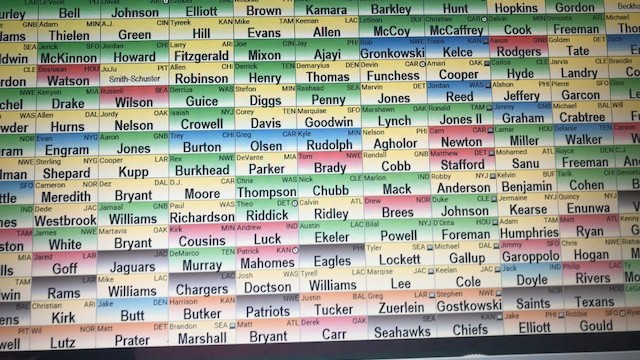 On June 28th we got a group of our best friends in the industry to conduct our second fantasy football mock draft of the season. To switch it up some, we decided to go with a two quarterback format to see how that would switch up the way players were drafted. I think you will see it had a major effect. The following are our drafters and their Twitter handles. I encourage you all to follow them all, because every one is a great fantasy football mind.

We found out right away that the two quarterback stipulation was going to change how this draft went down. Justin Mason took Aaron Rodgers in the first round. Now, while I expected quarterbacks to go sooner than they normally do, I was a bit surprised by this but not shocked. Rodgers is still pretty much the consensus number one at the position. The rest of the first round was pretty standard really. David Johnson over Todd Gurley was a bit of a surprise, but in a PPR league Johnson should be a monster.

Round 2 was another one that is obviously filled with studs. The two QB factor was shown again when Tom Brady went with the fourth pick to John LaPresto, Deshaun Watson went to Patrick Wisniewski, and Cam Newton went to Mike Hauff. I was a bit surprised that Newton went Wentz and Cousins. I was also slightly surprised that Davante Adams went before A.J. Green and Mike Evans. Christian McCaffrey went with the last pick in the round to Anthony Cervino. He gets great value in PPR leagues, although I may have gone with Jerick McKinnon or LeSean McCoy. Not to mention I also picked Jordan Howard who I do like over McCaffrey.

A.J. Green in the third round is a steal, even if it is a two quarterback draft. Great pick by Anthony Cervino. Obviously since I wrote about it last round I like Jerick McKinnon here as well. As a matter of fact I can't find one pick in this round that I don't like. Tyreek Hill in late third round was a great pick by Sam Holt, and although he is getting up in age, I think LeSean McCoy is awesome value here. Justin Mason goes with the ultimate wild card here with Josh Gordon, but I do think that he will live up to this draft status.

By the end of round four, eight quarterbacks were off the board. Four more were taken in this round. Drew Brees to Steve Rapin, I took Kirk Cousins, Matthew Stafford went to Joe Gallina and Anthony Cervino finished the round with Jimmy Garoppolo. Our second tight end was taken here too when Justin Mason led off the round with Travis Kelce in a spot that I think is awesome value. I also think that John LaPresto made a solid pick with Joe Mixon, Sam Holt with Derrius Guice, and Mike Hauff with Allen Robinson.

If Mike Hauff's gamble of Andrew Luck's health pays off, he has a great pick here. Personally, I'm not counting on it, but I understand lots of people are optimistic. I think Philip Rivers to Mike Florio, Ben Roethlisberger to Patrick Wisniewski, and especially Jared Goff to John LaPresto were great quarterback picks here in the fifth round. The best of the rest include Amari Cooper to Steve Rapin, JuJu Smith-Schuster to Sam Holt, and Stefon Diggs to Joe Gallina.  All great options. Finally, at this point I'm also down with Alex Collins who I would have picked if he had dropped to me here.

Quarterback is starting to thin out by this point and a lot of teams still don't have two. That's why I like the pick of Pat Mahomes by Justin Mason. Mahomes might only have one NFL game under his belt, but he has a world of talent and is a great choice here. John LaPresto may have the best pick of the round with Brandin Cooks here. A deep threat who could challenge ten touchdowns is awesome sixth round value. I also really love Zach Ertz here and that's who I would have picked if that a-hole Steve hadn't sniped me on it. I took Jarvis Landry who should still be a PPR machine. The same can said for Michael Crabtree who went to Joe Gallina with the tenth pick in the round.

The seventh round still brought a lot of quality players. I LOVED the quarterback picks here with Derek Carr to Sam Holt and Mitch Trubisky to Jim Day. I like Carr to have a nice bounceback season and have taken him in other mock draft, and Trubisky is one of my favorite QB2 targets this season. I am a fan of Mike Hauff's pick of Pierre Garcon who I think will be a great PPR guy this year with Jimmy Garoppolo at quarterback now rather than the hot garbage the Niners were featuring last year. Joe Gallina takes a runner I like in Derrick Henry. He is due to split with Dion Lewis (who also went this round to Steve Rapin), but I think Henry will get more carries. I do like Lewis in PPR leagues though as he is sure to rack up receptions in that offense.

Jim Day grabs another quarterback I like as a late option here in Eli Manning. He was pretty awful last year, but every receiver he had was hurt. With improvements to the offensive line and an improved running game with Saquon Barkley, Manning SHOULD improve. Brandon Myers took Rex Burkhead who could easily have a big role in the Pats backfield. If he does this is an awesome pick. I took Evan Engram who I totally love as my TE1 this year and it set off a chain reaction of tight end picks. The next five picks were tight ends, which basically wiped the position clean. I don't have a fault with any of these picks, and if you get one of them you should be good at the position. Not the biggest Jimmy Graham guy this year, but he still should have good touchdown numbers.

Mike Hauff took the suspended Julian Edelman, and in the ninth round that is a great place to pull the trigger. I believe he is far superior to the receivers taken in this round and even with four less games he could still get more points than them. I do really like Allen Hurns who went to Joe Gallina. The Cowboys need SOMEONE to throw the ball to, and I don't trust Terrence Williams and I don't see Michael Gallup being a WR1 as a rookie. I took Blake Bortles as my number two QB and while he isn't great, he is better than he is given credit for. Will Fuller is a great deep threat/high touchdown guy if he can stay healthy. Delanie Walker still has great PPR value for a tight end and Sam Holt did a good job there. Jim Day got a great pass catching back in Duke Johnson, and Justin Mason finished out the round with Kenny Golladay who will try to get more attention in Detroit this year.

The tenth round isn't the most exciting round in this draft, but there were still some good values. Brandon Myers grabbed who we think is going to be the main ball carrier for the Browns in Carlos Hyde. Hyde had a solid career for the Niners and now goes to the newly reformed Browns offense. Jordy Nelson went to John LaPresto and I am interested to see how he does in his new home in Oakland. I don't know that he will be the same guy he was in Green Bay, but in the tenth round it is amazing value. Sam Holt got a great pass catching back in Tarik Cohen. With the new coaching staff liking to throw to the running back, she could have gotten a great deal. Steve took Sterling Shepard who I like as a top 30 receiver , and this late that is a good pick. Finally, Joe Gallina took Marquise Goodwin who also could be another great tenth round pick if he is going to be a playmaker in the Niners offense again.

There were a number of good receivers taken in the 11th round. I liked my pick of Nelson Agholor who broke out last year and looks to be the top receiver for the Eagles again in 2018. Anthony Cervino took a rookie receiver in D.J. Moore who went to Carolina. He has a chance to be one of the starting receivers on that team. Mike Hauff took Randall Cobb who should be a solid receiver in a PPR league with Jordy Nelson out of time. Steve Rapin took a great pass catching back in Chris Thompson. Injuries are the only thing that could stop him from catching 70 passes and being a great 11th round pick. Jim Day took another PPR valuable running back in Theo Riddick who is the pass catching runner in Detroit.

I liked the first two receivers taken in this round with rookie Calvin Ridley going to Justin Mason and Cam Meredith to Jim Day. Ridley has burning speed and should be at worst a nice touchdown contributor. Meredith could be a solid possession receiver in New Orleans with Drew Brees at quarterback. All Green Bay running backs went this round with Jamaal Williams to Brandon Myers, Aaron Jones to Mike Florio and Ty Montgomery to Joe Gallina. Personally, I think it is either Williams or Jones, and if I had to guess one right now I would go with Williams. Sam Holt took what should be the Pats pass catching back in James White. Steve Rapin took the always looking to break out Tyler Lockett, and I took last year's receiver sleeper choice Josh Doctson. Maybe this is the year he breaks out.

Anthony Cervino took Demarco Murray who I know he thinks is going to sign in Indianapolis or another place where he will get a chance to be the lead back. In late June that isn't a bad bet. I'm not thrilled with a lot of rookie wide receivers, but Mike Hauff took one I do like in Michael Gallup. Dak Prescott can't throw to Allen Hurns every time! Joe Gallina took a good reliable vet receiver in DeSean Jackson. Some top defenses went off the board when I took the Rams, Steve took Houston and Brandon Myers took the Vikings. They should be three of the better defenses in the league. Justin Mason took a nice shot with rookie Nyheim Hines who could have more of a role than you would think, especially with Robert Turbin suspended. Finally, Jim Day took Jordan Matthews who has a chance to have an impact in New England with Julian Edelman suspended for the first four games.

The last two rounds are mostly filled with kickers and defenses, and I don't really take time to break them down. Martavis Bryant and Peyton Barber are the two that stand out from position players. Bryant has a chance to perhaps score six or seven touchdowns as a deep threat for the Raiders. At the end of your draft he isn't a bad guy to take a shot on. I took Peyton Barber who I really don't have a ton of faith in to take the job from Ronald Jones, but if the rookie struggles or fumbles, Barber could be the lead back in Tampa. Thanks for checking out our mock. feel free to ask any questions to ryan@fightingchancefantasy.com