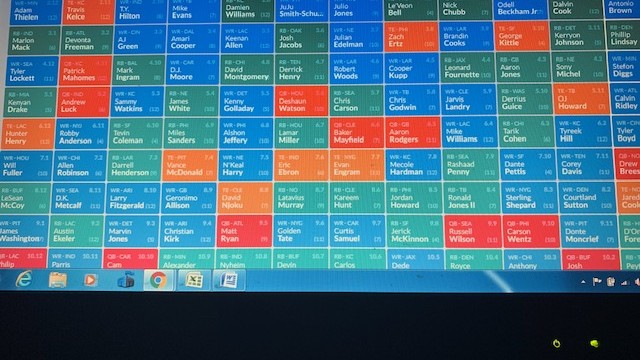 The staff from Fighting Chance Fantasy as well as friends of the site, Joe Gallina, Bob Lung, Anthony Cervino, and Jason Willans joined us for a mock draft to get you ready for the fantasy football season. We were happy to give Sleeper a try for this mock, and I have to say that it was a very positive experience and a site we will use again. If you are looking for a place to run your leagues you can visit Sleeper here! Enjoy the results of our mock draft and feel free to come at us with any questions. Here are the participants and their Twitter handles

I honestly can't say that there was a real shocker or any pick that I would call crazy in the first round. Your first round might play out a bit different. You might have Julio Jones or Odell Beckham go in your first round. There's a chance with all of the news that Todd Gurley might fall out of your first round. However, This is a solid group of picks and a solid representation of what you can expect in your drafts.

Again the second round, I can't say that there's anything that you should call a major shock. I can see some of you saying that I should have taken Julio Jones or Odell Beckham over Antonio Brown, but I still think Brown is going to have a massive season in Oakland and I am not the biggest fan of Odell or Julio. I am a huge fan of Kevin Tompkins taking Nick Chubb, and Kacey Kasem got a great value with Travis Kelce with the 11th pick in the second round.

In my opinion the third round is littered with solid bargains. I am a bit concerned about his recent injuries, but Devonta Freeman at 3.02 was nice by Kacey. On the receiver front, Dwain McFarland had a great pick with Amari Cooper, Jason Willan rocked it with the pick of Keenan Allen, and I liked Kevin Tompkins pick of Brandin Cooks. Zach Ertz and George Kittle predictably went in the third round, and if you want these two star tight ends, this is where you will have to take them. I went with Phillip Lindsay, but if I had the chance to do it again, I might take Sony Michel or Aaron Jones ahead of him.

Obviously based on what I wrote the last round, I loved the picks of Sony Michel and Aaron Jones. I feel like I got great value on Stefon Diggs who I think will be the better receiver in Minnesota this year. Rams receivers went back to back with Cooper Kupp to Anthony Cervino and Robert Woods to Bob Lung. Both guys got solid fourth round picks. David Montgomery is the first rookie off the board to Jason Willan, and I love the pick of Mark Ingram to Gary Haddow as I think Ingram is in for a big year in Baltimore. Finally, the first quarterback was picked with Patrick Mahomes to Kacey Kasem. Mahomes is likely to be the first quarterback taken, and the fourth round is a reasonable place to see him picked.

I love the pick of Kenyan Drake here by Brian Drake. I think Drake will easily be the main ball carrier in Miami this year, and while I don't know how strong the Dolphins offense will be, Drake should be solid. Kacey Kasem took a second quarterback in two rounds. Hey, it's a mock. This is the time to try out different ideas, and to have two mega quarterbacks could be great and Kacey is letting this play out. Gary Haddow takes Sammy Watkins who could be the number one in KC if Tyreek Hill misses a lot of the season. Dwain McFarland got a great pick in PPR leagues with James White. White is a fantastic pass catcher out of the backfield and is a solid pick here. Jason Willan gets the new best receiver in Detroit with Kenny Golladay who is looking like he is a stud in the making. Joe Gallina takes Deshaun Watson who I have a MASSIVE man crush on. Chris Godwin goes to Anthony Cervino as the wide receiver who EVERYONE loves this season. Finally, Steve Rapin takes Derrius Guice who is being forgotten by some after missing his entire rookie season, but could be an incredible value here.

I started Round 6 with Tyler Boyd, a guy that I have high hopes for that will follow up with another monster season. Mike Riggall selected Tyreek Hill in a risky pick. Will he be suspended? Will he play all season? If he plays all season he is an amazing pick here. Another receiver that a lot of people (including me) are hoping for a big season from is Mike Williams who Kevin Tompkins picked. Quarterbacks started to go as Aaron Rodgers and Baker Mayfield went here. Mayfield as the fifth overall quarterback was a slight surprise. Miles Sanders went to Dwain McFarland this round. I am not a huge fan of Jordan Howard, but he still should have a role early on so we will see how the carries play out for Sanders. Brian Drake may have gotten a total steal with Hunter Henry if he can come back healthy and be the guy he was before injuries kept him out.

Drake came back in the seventh with another good pick with Will Fuller. He has a real problem staying healthy, but when he is on the field he is a monster play waiting to happen. Is Todd Gurley really messed up? If so, Gary Haddow just got an awesome pick with Darrell Henderson. Is Tyreek Hill going to be suspended? If so, Anthony Cervino may have gotten a steal with Mecole Hardman. The best pick of the round is definitely Dante Pettis to Steve Rapin. I know the Niners have brought in new weapons, but Pettis is certainly their number one guy and is incredibly explosive. Tight ends were the news of the round as Vance McDonald, Eric Ebron and Evan Engram all went. Engram is my favorite, but all should have at least decent seasons.

I started the 8th round with Jared Cook who has turned into one of the better tight ends, and while the Saints haven't featured a tight end since Jimmy Graham left, I'm hoping they do now that they have a talent like Cook. Steve Rapin took a favorite "sleeper" in Sterling Shepard. Odell is gone, and yes they brought in Golden Tate, but Shepard has to be in for a boatload of targets. Will Ronald Jones take over the Tampa backfield? Will Jordan Howard get rejuvenated in Philly? Will Kareem Hunt have an impact when he returns from suspension? These are all questions that come with the eighth round picks. If these owners get positive answers to these questions they will be amazing values. I also like the pick of David Njoku to Jason Willans, Geronimo Allison should have an increased role and was picked by Dwain McFarland, and can D.K. Metcalf be more than just abs? Kacey Kasem is hoping so.

We start getting to a little slimmer pickins now. However, there are still a lot of great picks. Drake led us off with James Washington who should have an increased role with Antonio Brown out of town. I love the pick of Christian Kirk by Dwain McFarland who has a chance to be the top receiver in Arizona by season's end. The value picks of the round obviously come with quarterbacks. If Matt Ryan and Russell Wilson can duplicate last seasons, they are amazing picks. And Carson Wentz is still very young and should have a great season. Golden Tate could be PPR gold again, although I worry about the Giants offense. Jerick McKinnon is in a much more cloudy situation this year with the Niners but if he's the lead back this would be a great pick. Donte Moncrief could be a huge beneficiary of AB's departure as well. And being an anti-Lamar Miller guy, I finished the round with D'Onta Foreman. Yeah, he's coming back from an Achilles injury, but he is young and I think he is ready to be the lead back.

The tenth round is littered with high upside guys I like. I started it with Peyton Barber who is the exact opposite of a high upside guy hahaha. He is a blah starting running back who is begging to be overtaken by Ronald Jones II. However, it is the 10th round and I took a shot at a guy who could be a starter. Mike Riggall took the high upside of Josh Allen. Steve Rapin grabbed a guy I love with Anthony Miller of the Bears. Anthony Cervino took my favorite Jags receiver in Dede Westbrook. Joe Gallina took Devin Singletary who has a chance to make an impact in Buffalo this year since LeSean McCoy sucks. Kacey Kasem took rookie Parris Campbell who has a great chance to make an impact in Indy. Cam Newton and Philip Rivers went in this round and it continues to prove you can wait for your starting quarterback.

The eleventh round is when things start to get a little hairy but there are still a few high upside picks. If Keke Coutee can stay healthy he has a chance to have a great impact in 2019. Damien Harris could be the beneficiary of some carries if Sony Michel can't stay healthy. Emmanuel Sanders could be Emmanuel Sanders if he can stay on the field. Kyler Murray obviously was the top overall pick and will start in Arizona. A.J. Brown doesn't go to the best situation in Tennessee but he is an exciting rookie. Marquise Brown has a chance to make an impact in Baltimore. All of these players are very worthy of an 11th round pick and could be massive bargains.

The final two rounds in most leagues are kickers and defense, but since we didn't draft those in this league, let's hit the highlights. I took Marquez Valdes-Scantling in the hopes he turns out to be the second receiver in Green Bay. Austin Hooper went as a tight end everyone loves to break out. Jared Goff is one of my favorite fantasy quarterbacks every year. Lamar Jackson is coming into his second year and a QB that causes a lot of arguments on Twitter. The kid can certainly run the ball, will that be enough to have QB1 value? Will T.J. Hockenson be a top 12 tight end in his rookie season? Drake took two PPR machines with his final two picks in Adam Humphries and Randall Cobb. I'm a huge fan of Tre'Quan Smith to show more flashes of greatness like he did in 2018. Trey Burton is an absolute STEAL in the last round of this draft a tight end. And finally, my man, Jimmy Garoppolo was selected by Kevin Tompkins. Man I hope he stays healthy and leads my Niners to the playoffs.