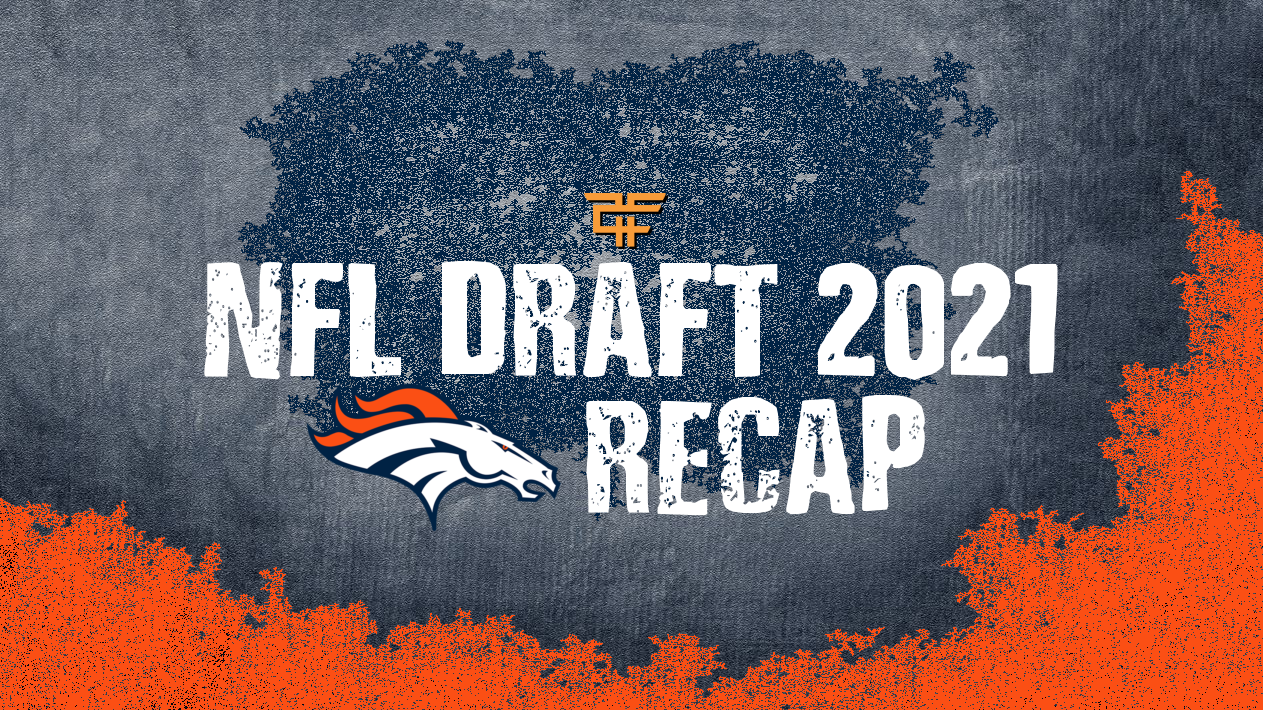 Today, we tackle the Denver Broncos, so let's see what they did in this year's NFL Draft!

Who the Broncos selected:

Twitterverse let out a collective groan as Denver passed on QB at pick 9 with Justin Fields falling into their laps, but Denver had other plans. That was followed by another flood of upset fantasy football tweets when Denver traded up to select Javonte Williams in the top of the 2nd round. New general manager George Paton traded their other draft selection later in the round to gain some capital back. With their first of two picks in the third round, the Broncos chose the star of Twitter and the Senior Bowl, center Quinn Meinerz. He was followed up by Ohio State's Baron Browning on defense.

In the days leading up to the NFL draft, the Denver Broncos traded for Teddy Bridgewater, an indubitable milquetoast move. Then, mere hours before Thursday's festivities, they set the internet aflame with speculation around acquiring Aaron Rodgers. However, newly minted GM George Paton boldly passed on a quarterback in favor of cornerback Patrick Surtain II, leaving Broncos fans perplexed. Perhaps general Paton's war room comrades misunderstood him under his mask when he said, "let's draft the top quarterback," thinking he said cornerback - just a thought.

The Broncos followed that head-scratcher by trading up to select running back prospect Javonte Williams. I liked this move. Though he handled under 12% of carries at North Carolina, Williams made the most of his touches, averaging 16.5 receiving yards per game while setting records for broken tackles per attempt in 2020, according to PFF. Williams, a consensus top-5 back heading into Thursday's draft, will compete immediately with an aging Melvin Gordon, Royce Freeman, and preseason DFS hero, Mike Boone. He can easily outperform 2020 Philip Lindsay (now with the Texans), but this will likely remain a committee with Melvin Gordon leading the way... for now.

Round 3 saw Denver make solid decisions using their draft/trade capital to snag offensive lineman Quinn Meinerz from Wisconsin-Whitewater, and Baron Browning, a linebacker from Ohio State. Meinerz was Daniel Jeremiah's 45th overall ranked prospect, and Brandon Thorn had a second-round grade on him. Meinerz also became known for his Wilderness Workouts and sporting a superb midriff on gameday. He will be a day one difference-maker in the middle of the offensive line. Browning was atop Denver's draft board, according to George Paton. An athletic, hard-hitting prospect, Browning can hopefully be a three-down player, ala Brandon Marshall, another productive late-round Broncos linebacker from yesteryear.

The sixth round found the orange and blue taking former SEC wide receiver Seth Williams. Underrated by some, Williams profiles as a project wideout/special teamer coming out of this deep WR class.

There aren't any fantasy football implications from the Surtain pick on the surface, but that's where you'd be wrong! Denver's decision not to go with Justin Fields or even Mac Jones created a massive ripple effect causing the Bears to trade up for their franchise quarterback. Now, Drew Lock and Teddy Bridgewater will battle it out in training camp for the starting job. Sutton, Jeudy, Fant, and company probably take some small hits to their value, but I will remind you not to fade talent in this situation. They will be fine. I believe Lock will be the starter come Week 1, but does Drew Lock have what it takes to make the third-year leap?

Buy low on the skill positions as people look to dump them because of the quarterback room. This roster is still stacked with talent on both sides of the ball. Remember that Sutton, in his second season, put up 72 catches, 1100+ yards, and six touchdowns with a trio of Flacco, Brandon Allen, and rookie Lock throwing him the ball. And don't forget how much you loved Javonte before the draft. Talent > landing spot.

Patrick Surtain II, CB, Alabama - This move certainly toughens an already solid secondary in Denver - a group that ranked 9th against enemy wideouts in 2020, according to Football Outsiders DVOA. Denver D/ST should be a top-10 unit for fantasy GMs in 2021.

Javonte Williams, RB, North Carolina - Entering training camp, Javonte will remain behind the veterans on the depth chart. He should be considered a mid-round pick in 2021 redraft leagues in an RB committee limited mostly by below-average QB play ... for now.

Seth Williams, WR, Auburn - Williams should be considered in only the deepest redraft leagues and mid to late-round pick in dynasty.