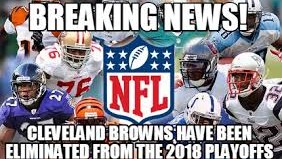 Welcome everyone to the 2018 edition of the Five Game Parlay! For those of you unfamiliar with this set of articles, each week five contestants will be each picking five NFL games against the point spread. We will track the standings all year long, and we will talk all kinds of shit at each other along the way. We have a couple of new participants this season. Our own Brian Drake joins the crew, and you can follow him on Twitter @drakefantasy. We also welcome a great friend of the site, Joe Gallina from RotoExperts! You can find Joe over at RotoExperts and also in the New York Post as well as on Twitter @joegallina. So, now that you know who is playing and how this goes, let’s get right to the picks!

Baltimore Ravens (-7) over Buffalo Bills.  I think the Bills are going to suck something awful this year. Nathan Peterman is going to be overwhelmed by the Baltimore defense and he might throw 12 interceptions. Alex Collins should have a field day, and I think Crabtree catches a TD too.

New Orleans Saints (-9.5) over Tampa Bay Buccaneers. The Saints are great at home, and the Bucs aren’t great anywhere. Look for Drew Brees and Michael Thomas to slap the Bucs defense around like Steve does to his wiener on the regular. Saints could win this one by 20.

Houston Texans (+6.5) over New England Patriots. Watson and Hopkins and Fuller are a lethal combination when all three are healthy. The Pats should win this game, but I think it will be a dogfight. The Texans defense is completely healthy right now and the Pats defense typically starts out a little rough. I still think New England wins, but the points are too many for me to pass up.

Los Angeles Rams (-4.5) over Oakland Raiders. The Raiders better wave the fucking white flag right now. This one could look like a horror movie by the time it is done. The Rams should destroy the Raiders and leave old, washed up NFL veterans just laying in a pool of their own blood when this one is done.

Carolina Panthers (-2.5) over Dallas Cowboys. I honestly don’t think the Cowboys are going to have a great year, and I look for Cam and Company to get off to a good start. Carolina’s defense can focus on Zeke and daring Prescott to beat them with his arm. I don’t think he can. Give me the Panthers here

Cleveland Browns (+5.5) over Pittsburgh Steelers. Gotta love the home underdog. Steelers will probably win the game, after all they’ve beaten the Browns six straight times. However, the Browns are a much improved team and the last three games between these rivals has been decided by four points or less. Big Ben doesn’t like playing on the road but having grown up as a Browns fan in Ohio he loves beating and punishing them for not drafting him in the first round of the 2004 draft. He just won’t beat them by too much in this game.

Los Angeles Rams (-4.5) over Oakland Raiders. After watching the sloppy play on Thursday night I’m wondering if the lack of preseason reps for QB Jared Goff and Todd Gurley (he didn’t even sniff the ball this preseason) might cause them to come out of the gate a bit slowly, but I still have them beating the Raiders 27-10. The Rams potent offense and excellent defense will help crush the demoralized Khalil Mackless Raiders. Oh by the way that TD that’ll get the Raiders their 10th point will come in garbage time…and Jordy Nelson will catch it.

Arizona Cardinals PK over Washington Redskins. Settle in and get ready to watch the Adrian Peterson revenge bowl baby!! Peterson put his body on the line for these Cardinals for a whole six games last season and they just through him to the curb like last weeks trash. Unfortunately that narrative won’t pan out. The team from Washington is 1-3-1 against the spread in their last five games in Arizona and 0-5 against the spread in their previous Week 1 games. Take the Cardinals!!

Los Angeles Chargers (-3) over Kansas City Chiefs. The Chiefs have won the last eight meetings between these rivals and I’m betting that the Chargers have taken all that they can stands, and they can’t stands no more. The Chiefs’ outside corners are horrible and the Chargers’ big play receivers should be able to have their way with them. Second year QB Patrick Mahomes catches a break with star Chargers DE Joey Bosa out on Sunday, but he’ll still have a tough time of it in his second career start on the road against a pretty good defense.

Baltimore Ravens (-7) over Buffalo Bills. Don’t expect Bills QB Nathan Peterman to throw five interceptions in the first half this Sunday. However, you can’t really expect him to have a good game either. He’s got no receivers, the Bills have a terrible offense line and they can’t stop the run. They’re going to lose a bunch of games this season…including this one. The Ravens will cover and Alex Collins will score two touchdowns to lead the way.

Cincinnati Bengals (-3) over Indianapolis Colts. My first pick of the new season is going to be Cincinnati covering the three at Indianapolis.  Both teams can bring it offensively, and Andrew Luck is in his first game in a long time, but the Bengals have more weapons, and a slightly better defense. Does that counts when they both suck?  Bengals Cover-

Baltimore Ravens (-7) over Buffalo Bills. My lock of the week is Baltimore at home giving a touchdown. The Ravens not only cover that seven, and they win quite handily.  Even with Sacco testing out his all new WR crew of Crabtree/Snead/Brown, and the one constant is underwhelming Alex Collins, the Ravens kill Buffalo.

Arizona Cardinals (pk) over Washington Redskins. My third offering is a dirt game, with Arizona being my PK at home versus the Redskins.  Cards just have a few more really good weapons in DJ and Fitz, and neither team has an exciting QB option.  This is going to be an ugly game, but Arizona wins at home.

Tennessee Titans (-1) over Miami Dolphins.  I really like the Titans covering the one they’re giving, this game should have been a PK as well. The Titans have a lot to prove and Marcus Mariota especially has a lot to prove as the possible franchise QB.  Even with the game in Miami, I’m almost considering this a fifth pre-season game, which the starters play all of.  Is Corey Davis taking the next step as most WR’s do, how much is Dion Lewis going to cut into Derrick Henry’s carries, or is it the other way around? Give me the Titans, just because I really love that song by a metal band I love, Soulfly.

Detroit Lions (-6.5) over New York Jets. Yes, I’m betting on the Lions and am going to win with them to begin the 2018/19 season.  The Leos are giving a weak 6 ½ to the J E T S, Jets, Jets, Jets, and are going to cover this by beating a very ineffectual offense.  I actually drafted the Jets D as my second Defense in one of my leagues, but the Lions have too many weapons and a home field on Monday night.

Cleveland Browns (+5.5) over Pittsburgh Steelers. We have Lev Bell holding out and not playing. We have Big Ben who has his struggles when playing on the road. We have Ryan Hallam with a small wiener. We have a forecast of rain and windy conditions in Cleveland on Sunday. This has all the makings of an ugly game and I think the improved Browns will cover five and half points rather easily.

Denver Broncos (-3) over Seattle Seahawks. The Broncos are playing at home, are the much better team, yet they are only favored by a field goal? This doesn’t seem right to me. The Seahawks have lost a ton of weapons on both sides of the ball this offseason and I think their best days are behind them. The Broncos added pass rusher Bradley Chubb to pair with Von Miller in this year’s NFL Draft, and they should have Russell Wilson running away from them faster than Polka Pat runs to the toilet after Bean Burrito night at the local VFW.

Arizona Cardinals (PK) over Washington Redskins. I can’t remember the exact stat, but it was something like when teams travel from the eastern time zone to play on left coast time, their record is 8-277. Something like that anyways. I think David Johnson and Larry Fitzgerald should eat well in this game and the Cardinals will get off to good start as they smack around the Redskins.

Detroit Lions (-6.5) over New York Jets. As a fan of the Lions, I normally stay far away from picking them in this competition. Just like my hopes and dreams, the Lions have a way of letting me down. However, this week they are facing a rookie quarterback in Sam Darnold who happens to be playing his first NFL game. Since the game is in Detroit, I think the Lions will rough him up and make him wish the Jets had started Josh McCown to kick off the season.

Los Angeles Rams (-4.5) over Oakland Raiders. Jon Gruden is making the Raiders the laughing stock of the league and Sean McVay is going to laugh his ass off all the way to 1-0. I honestly don’t know how this spread isn’t double digit points. I think the Rams take this one 74-3.

Pittsburgh Steelers (-5 ½) over Cleveland Browns.  LOL Give me a break.  Pittsburgh is in the middle of a mutiny.  The weather is going to be awful.  Oh by the way the Browns are WAY better than last year.  Browns win straight up!  Crack open the Bud Light coolers!!!

Indianapolis Colts (-3) over Cincinnati Bengals. Indy is a 3pt fav over the Bengals?  Either this 10% beer I'm drinking is kicking in and I'm reading this wrong or the guys in the desert haven't seen the Colts defense.  The Bengals are going to make the Colts look as bad as Bruce Jenner in a bikini contest.  This won't be close.

Los Angeles Chargers (-3) over Kansas City Chiefs. Hmmmm team with weapons at every position versus a team with high schoolers in the secondary.  Yeaaaa give me Phil Rivers throwing TD's to all 13 of his kids in this one.  Easiest money on the board.

Los Angeles Rams (-4 ½) over Oakland Raiders. This one puzzles me.  Oakland is old, slow, less talented, and owned by someone who gets their hair cut at schools for the blind.  The Rams are up 20 at the half.  Get outta here with this 4 1/2 nonsense.

Houston Texans (+6.5) over New England Patriots. Houston covers the 6 1/2 versus the Pats.  This was a shootout last year and will be again.  Whoever has the ball last wins.  Both O lines stink.  Neither secondary is that good.  Stack this game for DFS and watch the Texans lose but it's only by 3.