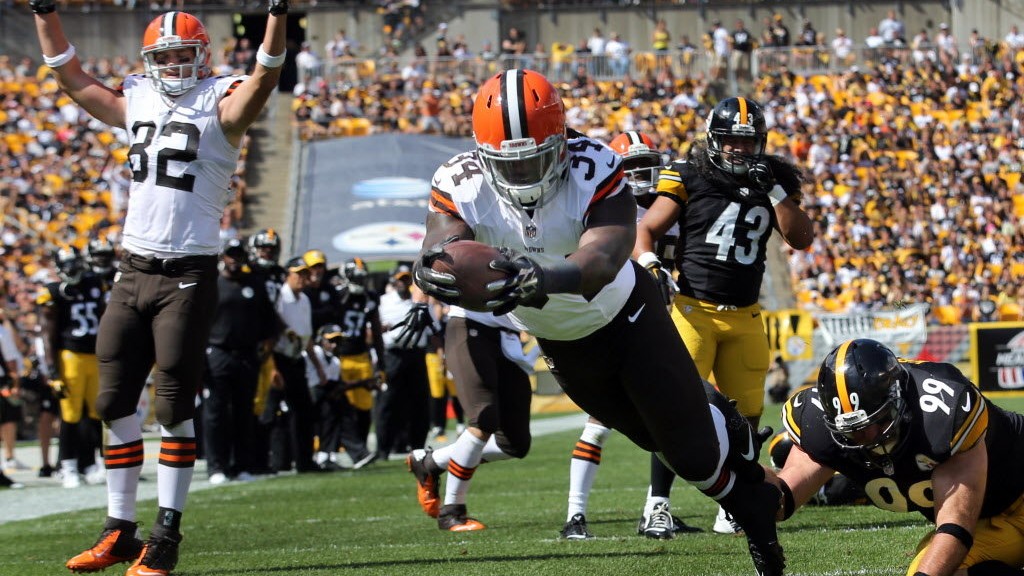 We at Fighting Chance Sports were discussing the NFL, and came up with a series of questions related to each team, and now we are going to break a few of these questions down, and hopefully help you in the draft thought process.  I’m currently taking on the AFC North, and Cleveland alone is worth a 1,200 page novel of questions, but I’ll keep it at one for now.

Pittsburgh Steelers: What should we expect from Martavius Bryant this season? Martavis Bryant has been impatient sitting out all of last year, can he return to fantasy relevant in 2017?

Ben Roethlisberger recently told Brian Batko of the Pittsburgh Post-Gazette in an interview about Bryant's offseason practices "He looks like a stud, as usual, so we're excited for him to be on the field this year and help us out." All this and the always popular “Best shape of his life” moniker are always entertaining.  Bryant will come back and most likely slide back into the previous role he had before his suspension. With Markus Wheaton plying his trade in the Windy City, a good battle for second receiver with Sammie Coates will make Big Ben one happy quarterback with all these options. Eli Rogers in the mix only means Bryant will see one on one coverage a lot. If all things go as planned in the perfect NFL world, I’m projecting Bryant to have 60-70 receptions, 950 yards and six touchdowns.  Bryant should be drafted ahead of some NFL teams number one receivers simply based on the offense his is affiliated with in Pittsburgh.

After recently declaring he played all last season with a partial tear in his groin (ouch), some questions were answered on how he sabotaged my hometown league as my number three wide receiver. He wasn't the only one though, as he had company screwing me in the form of Randall Cobb, Lamar Miller and Gronk.  At least after two good games from Gronk though I managed to swap him for Melvin Gordon from out greedy commish.  As for Maclin’s current value in Baltimore, he will come a much bigger discount now that he laid that humongous egg in Kansas City.  Fantasy owners have short memories, and plenty of them will forget he is just one season removed from an 87 reception, 1088 receiving yards and eight touchdown performance.  I’m still drafting Maclin when the time is right, and I believe he is already the best wide receiver in Baltimore. With Dennis Pitta out for good again, it just means even more targets and receptions for the former Missouri Tiger.

Cincinnati Bengals: Will Joe Mixon lead the team in carries? Joe Mixon comes with a lot of baggage, but a lot of talent too. How the Bengals carries are split up will be very interesting.

In Mock Draft Number #2 in NFL.com, Mixon was drafted at number #47 overall(RB #19) by Ari Ingel from Footballguys.com, one of my absolute favorite sites year around.  Could Mixon lead the Bengals in carries? He absolutely could, but there are more mouths for feed in that backfield than at a Duggar Family reunion.  Off-field issues? Check. Absolute stud? Check.  Remember Warren Sapp had off field issue and went late, and then became a Hall of Famer?  Remember Randy Moss had off field issues, and then became a Hall of Famer?  Now I’m not declaring Mixon will be a Hall of Famer, but the talent is there, with A.J. Green there to keep defenses honest, Cincy runners have some decent holes to blast through. Jeremy Hill sas last year’s ground pounder with 222 carries for 839 yards and nine scores rushing and an additional 21 receptions receiving. Mixon will have to share with Hill in the beginning. As for Gio Bernard, he only suited up for ten games last year with 91/337/2 rushing and 39 receptions for 336 yards and just one touchdown, so he isn't as much of a threat.  I just feel Mixon has a huge chip on his shoulder as he should have been the first back taken in the draft. I prayed the Lions would draft him, but alas, he is a Bengal and if things go right he will lead Cincy in carries. But until it sorts itself out, I’ll say no for now, but will draft him ahead of Bernard for sure, while he and Hill shouldn’t be drafted too far apart if you are handcuffing.

Cleveland Browns: Isaiah Crowell, is he the real deal for Cleveland?

Last season in split duties with Duke Johnson, Crowell certainly looked like the real deal. Against one of the easier schedules last year, and behind a better than average offensive line, Crowell thrived.  He played and started all 16 games last season, averaged 4.8 yards per carry with 198 total carries, 952 yards and seven touchdowns. Tack on 40 receptions and an additional 319 receiving yards and you have yourself a serviceable fantasy running back.  Finishing 14th in running back scoring last year, Crowell surprised many drafters after all the Duke Johnson hype. Fantasy owners are enamored over the new shiny toys and while Isaiah was in just his third season, he was the elder statesmen of that backfield. This season though I’m passing on the Cleveland backfield and you should too unless it’s as a fourth running back.  It faces one of the toughest schedule against the run (30th). And theywill once again be breaking in a new quarterback, which has become an annual tradition in Cleveland, much like Christmas, but not happy.  The Dogg Pound will be barking objections and obscenities all season.

You can reach me @PolkaPat to talk anything fantasy and be sure to read more of my thoughts at Mastersball.com