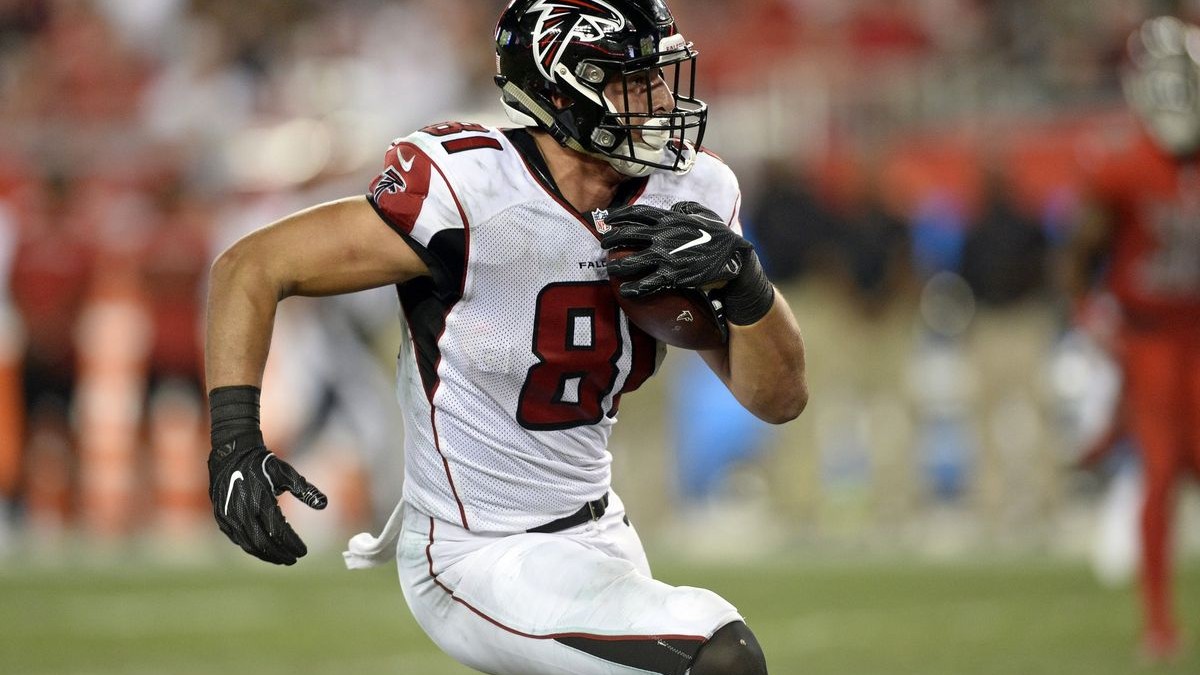 Everyone is probably well aware that I have a certain affinity for tight ends. They’re fickle and hard to pin down, but if you find a diamond in the rough, you’re all set. The tricky part is finding that steady tight end. If you don’t find yourself drafting Travis Kelce, Zach Ertz, or George Kittle, you can get yourself in an uncomfortable position.

There is one tight end that is going very late in fantasy football drafts worth taking note of. The Atlanta Falcons have an athletic tight end that has improved every season he has been in the league. If you want an effective tight end without paying big name value, set your sights on Austin Hooper. Hooper might not be the sexiest option, but he is still a worthy asset.

Hooper was the sixth overall tight end in fantasy last year and was selected to his first Pro Bowl. The six-foot-four 254 pound player had a career season in 2018 with 71 receptions on 88 targets for 660 yards and four touchdowns. Every season he sees his stat line improve. In 2016, he had 27 targets with 19 receptions and three touchdowns while going for 271 yards. His sophomore season had him putting up 29 receptions on 65 targets while bringing in three touchdowns and going for 526 yards.

In his 2018 campaign, he finished the season with the seventh most targets at the tight end position throughout the entire league. The touchdown numbers have not been exciting, but he is a reliable target for quarterback Matt Ryan. Look for improvements on the touchdown front in 2019. Also, the Falcons play 13 of their 16 games in indoor settings, and this will be advantageous for the 24-year-old big body.

The Atlanta pass catcher had seven games where he grabbed five or more receptions in his 2018 campaign. He had loads of receptions in weeks five through nine, including a whopping ten receptions in his week nine performance. During that time span, he had two games where he caught nine passes. Hooper should see a plethora of targets in the 2019 season, even with the numerous other targets for Ryan to throw at. Hooper just does not drop the ball.

Ryan is a veteran quarterback who is going into his twelfth season. He has been playing with Hooper since the tight end entered the league, and they seem to have good chemistry with one another. It usually takes a few years for tight ends to get to their full potential, so this could be an outstanding season for the fourth year player. Now that Dirk Koetter is in town, look for Hooper to progress in all aspects of his game. Koetter helped make the tight ends for the Tampa Bay Buccaneers relevant, and he should be able to do the same with the athletic Hooper.

Hooper is an attractive selection in dynasty drafts as he continues to grow from season to season. There are infinite tight ends out there to sort through, so you want to make sure you are drafting a player with the talent and skill to get you fantasy points on a steady basis. For where you are taking Hooper in your drafts, taking a gamble on him seems worth it. He has oodles of talent and potential, and he is surely a guy deserving of your draft pick. Even in a redraft league, Hooper seems to be an unbelievable steal.

As always, you can find me on Twitter @thekaceykasem. Feel free to give me a follow, and let’s chat!