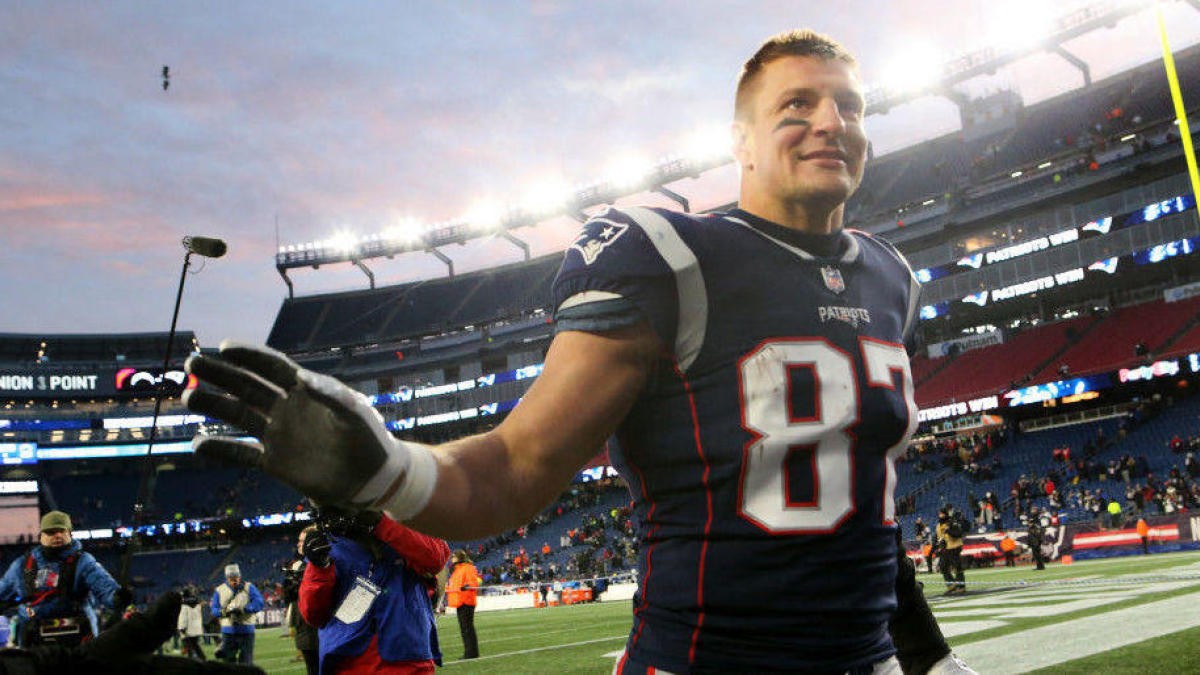 "Hold The Phone" on Rob Gronkowski

On a seemingly normal April afternoon (as normal as a pandemic can make it when most of the country is quarantined), some news hit the sports world that sent shock waves around the entire landscape. At approximately 4:00 Eastern time...

Patriots and Buccaneers have been discussing a trade for retired TE Rob Gronkowski, per league sources. Gronkowski has one year and $10 million left on his contract. But the two sides are, and have been talking, prior to Thursday’s draft.

Adam Schefter drops this bomb on us about retired former Patriots tight end Rob Gronkowski and a possible trade to the Tampa Bay Buccaneers. My thoughts? Oh, this is a nice story, it'll be something fun to talk about. Fast forward to...  25 MINUTES LATER, where Schefter reports that the trade between the Buccaneers and Patriots has finalized, pending a physical. Later on in the afternoon, Schefter reported that Gronkowski passed his physical 'with flying colors'.
So, this is an amazingly sped up timeline, which indicates that this whole trade process has been going on for sometime and yet so closely guarded by all parties to where we're all finding about all of this right now at once. That's all well and good, but what does it mean for fantasy football purposes?

How does "Gronk" stack up in Tampa?

Let's go look at the numbers. The 2019 Buccaneers targeted the tight end position 116 times in 2019, despite the "Bruce Arians doesn't target the tight end" narrative. That amount is pretty solid, even if one of the tight ends didn't pan out for individual fantasy football success between O.J. Howard, Cameron Brate, and the other ancillary options. It's fair to say too that Tom Brady's arguably worst season as a starting quarterback in the last decade came when he didn't have Rob Gronkowski as an option in the passing game. A lot of his passing numbers dipped to decade-lows, like completion percentage, touchdown percentage, and yards per game. He could only do so much without a hulking, 6-foot-6 red zone threat at his disposal, as he had for so many years.
As it stands right now, Rob Gronkowski is a 1A at the position with O.J. Howard as the 1B. There's a lot that's been said about Howard's trade availability and whether or not Gronkowski's arrival in Tampa Bay would #FreeOJHoward. After some careful though, it would behoove Bucs GM Jason Licht to keep Howard in Tampa. If Gronkowski's weight and muscle mass comes back in some form, to maybe a playing weight of 245 pounds (a far cry from the around 260 pounds he was playing at for nearly a decade) Gronkowski could be that move tight end, a chess piece for Arians to keep Howard into block on an offensive line that was clearly deficient in 2019.
As for Cameron Brate? He's likely the more realistic trade target for needy teams like Indianapolis, Buffalo, Arizona, and a host of others. It's a heck of a contract to take on (13th highest total value among 160 tight end contracts per Over THe Cap), but teams with an open contention window could certainly do worse than employ Cameron Brate. He'll be 29 when the 2020 season begins so he's still got some quality football left in him.

If we're looking at Dynasty valuation for Rob Gronkowski, we're looking at 1 year right now. He's going to honor the year he has left on his current contract. For this one year, if you have him stashed on your bench, he's worth seeing what somebody will pay. You owe it to yourself to capitalize on the hype and maximize value. I don't think you'd in a good position to trade FOR him at this point, because frankly, you'd be overpaying. He'd certainly be usable in your lineups on any given week should he be active, but that's the issue, his health.

Gronkowski has had a litany of injuries in the last decade, with numerous concussions that he has admitted to along with a couple of herniated discs and back strains that must be taken into account when we're assessing his on-field viability for 2020. Will Gronkowski be able to handle the rigors of an NFL season, having played his last game in December of 2018? He may be more capable and quicker than in year's past with the reduced weight on his 6'6" frame, but the flareups that come with a multitude of back injuries cannot be ignored.

As it relates to where he stands among his contemporaries at the tight end position? I don't think he fits in with my current PPR top 8 of Travis Kelce, George Kittle, Mark Andrews, Zach Ertz, Darren Waller, Tyler Higbee, Hunter Henry, and Jared Cook. After that grouping, you could absolutely make the case for Rob Gronkowski at TE9, but I think he is on the TE12 borderline for me.

My TE9 through TE15 is very fluid and that may move around quite a bit as the weeks and months get closer to NFL action. I do think based on a reduced number of games played from 16, his standing within the offense, and having to be a very touchdown-dependent focal point of the Tampa offense to sustain consistent fantasy value, that TE12 is a very aggressive initial landing spot. Gronkowski still has to wade through a lot of factors, such as the obvious receiving threats already on the roster in Chris Godwin and Mike Evans. Add in O.J. Howard being a vulture to some of the work, as well as running backs, a potential slot receiver, and you've got a situation that's not so clear-cut for Gronkowski's success in fantasy.

He can be a great fantasy tight end, and has glaringly obvious chemistry with Tom Brady, but even with that, there are many roadblocks toward that end and the initial hype for him post-trade has led to overvaluing his fantasy football value, at least in the short term. "Gronk" will be 31 at the start of the 2020 NFL season and through multiple surgeries and concussions. He has some standalone fantasy value, but we must consider his injury history and how many games he can realistically play in 2020 before putting him into a single-digit ranking among tight ends. Even in a thin position, he's still a borderline TE1 for me.

Agree? Disagree? You can find Kevin Tompkins on Twitter @ktompkinsii and join the conversation!