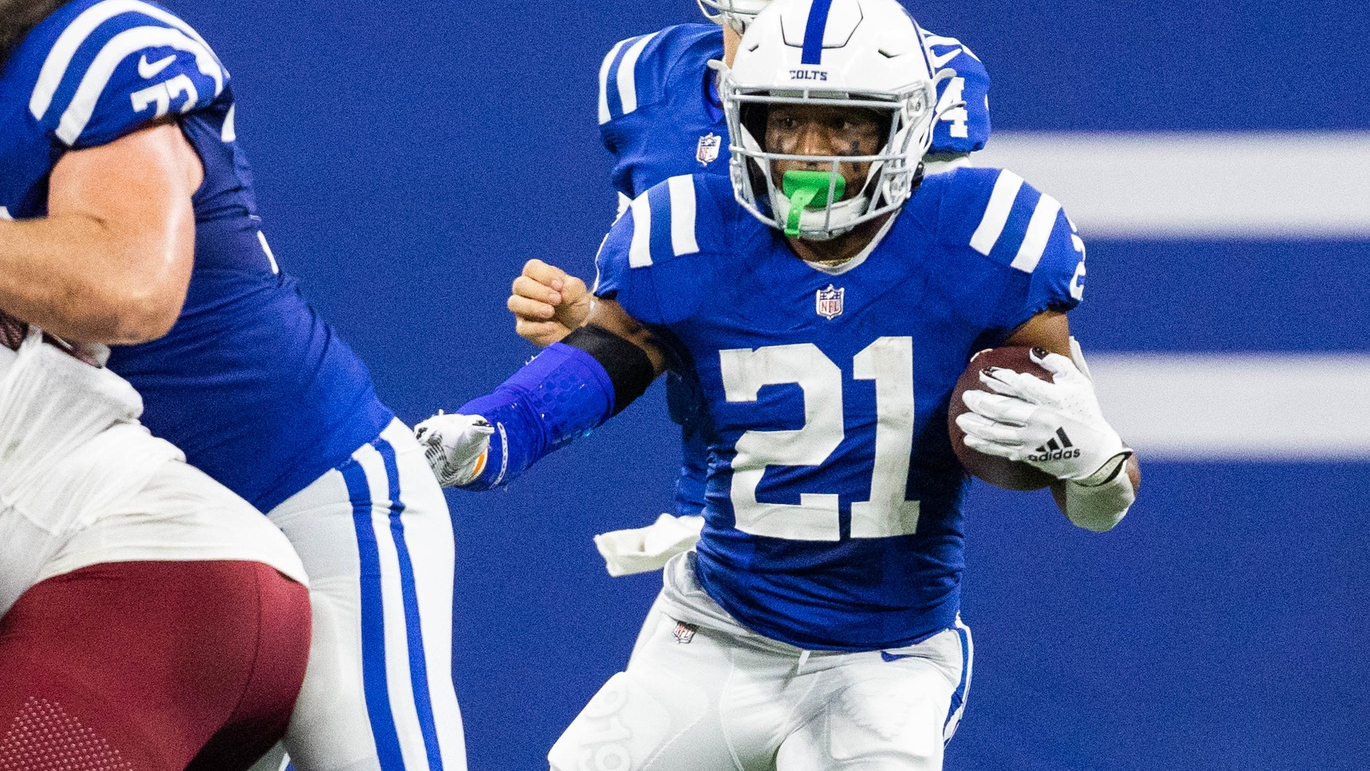 Do you prefer a crock pot or an instant pot? One cooks food for more time, and another speeds up that process. Depending on the occasion, we might need both. Sometimes, my analysis leans toward the crockpot style of letting things stew while researching different aspects over time, though there's a time and place for both. And that's the case in how I'll evaluate the Bills running backs and role for Nyheim Hines, plus Chase Edmonds and the Broncos backfield. We'll discuss the team's usage and efficiency and how Hines and Edmonds might fit into their respective offenses moving forward.

How Do Nyheim Hines & Chase Edmonds Fit On Their New Teams

Through Week 8, Devin Singletary ranks third in routes per game (26.7) at the running back position behind Leonard Fournette and Austin Ekeler. Jonathan Taylor is right behind at 24.8 routes run per game (No. 5), with Nyheim Hines at 14.6 (No. 29). Hines received a double-digit target share in each season, with a 12% share (No. 18) in 2022. 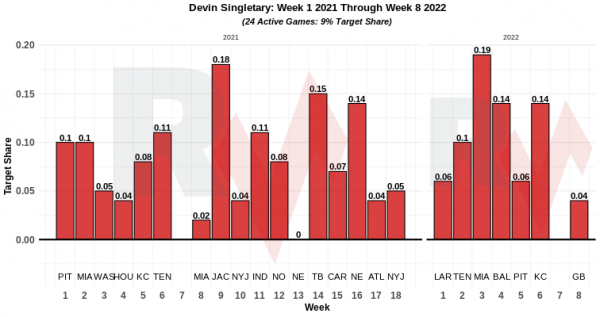 Typically, mobile quarterbacks like Josh Allen don't target their running backs, but we want a piece of the Bills' offense. The Bills running backs averaged the most targets per game (6.6) and the most receiving expected points (EP) at 9.7 in 2022 since Allen's rookie season in 2018. Assuming that trend continues, we could see Singletary lose receiving opportunities to Hines, but the team-level data might remain similar.

If we recall, the Bills nearly signed pass-catching specialist J.D. McKissic before he re-signed with the Washington Commanders. That led to the community being high on rookie RB James Cook, who possessed the receiving skills, with a 12% and 7% receiving yards market share in his final two college seasons. Cook ran a 4.42 40-yard dash at 199-pounds, with an identical match to Kenyan Drake based on size, speed, and college production.

After Cook's most productive total yardage game in Week 8 against Green Bay, his value goes down. His underlying metrics look juicy, with 3.8 yards after contact (No. 3) and a 12% evasion rate (No. 37), though it's a small sample of 24 attempts. In dynasty, keeper, or deep redraft leagues, Cook might be a buy-low candidate. Singletary is an unrestricted free agent in 2023, with Hines under contract through 2024. If Singletary or Hines miss time, Cook's stock rises with Zack Moss traded to the Colts. Hines also missed his bye week, with the Bills coming in Week 7 and the Colts in Week 14, which might be an added benefit to acquire via trade.

I made a terrible call recommending Chase Edmonds as one of my top ZeroRB targets. I liked the receiving profile for Edmonds with a running system that looked favorable. Unfortunately, I should've been more open-minded to Raheem Mostert staying healthy and being effective on the ground. Edmonds started the season well, but then the tides quickly shifted in Mostert's favor.

In Week 1, Edmonds led the Dolphins' running backs in carries and targets. From Week 2-7, Mostert garnered a 68.1% team rushing share, with Edmonds at 14.8%. Edmonds quickly fell out of favor, though we saw tiny glimpses of high-value touches near the goal line in a couple of games. Now, Edmonds goes from a highly-coveted backup to Mostert to the potentially best player in a three-way committee.

The graphic above shows the differences in the team-level data for the Denver and Miami backfield. The Broncos have averaged more rush attempts per game with better rushing EP but less efficiency in FPOE/G. Unsurprisingly, the Broncos use their running backs more in the receiving game, yet with weaker efficiency. 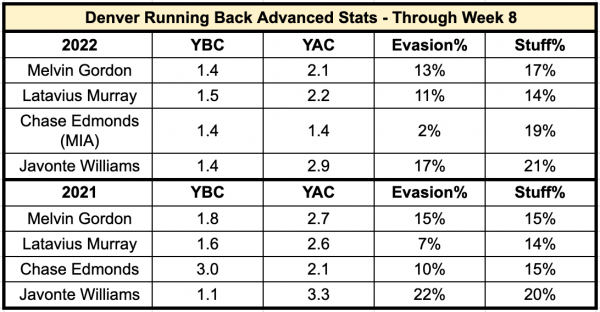 Through Week 8, Melvin Gordon has a 32.1% rush share, with Latavius Murry at 25.1% on first and second down. Gordon leads the team with 4.1 routes per game on third and fourth down, with Mike Boone close behind at 3.6 and Murray with zero. The underlying metrics remain unappealing, with Gordon averaging 2.1 YAC and a 13% evasion rate. Murray's advanced stats look similar, with 2.2 YAC and an 11% evasion rate. Boone's small sample of 3.1 yards before contact, 2.3 YAC, and 27% evasion rate intrigued me. However, Boone's injury and the messy usage made him a player to fade.

There's a scenario where Edmonds takes on the receiving and third down role, which eats into Gordon's playing time. Edmonds might have a similarly frustrating situation on a weaker offense. While we prefer running backs with the receiving profile, it's messy if it's a three-way committee like the Commanders. There's another scenario where Edmonds garners early-down rushing work, plus enough of a receiving profile similar to Antonio Gibson, with RB3 value. Unfortunately, the Broncos rank 30th in total offensive EPA/G (-6.11) in front of the Colts and Steelers. As an Edmonds enthusiast, I'm holding, but we'll need 2-3 weeks to react accordingly.

The fun (or frustration) of fantasy football is the range of outcomes for a player, team, or situation. We'll try to use data and other information to guide our process.