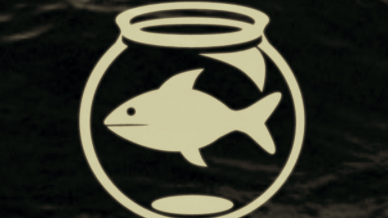 How I Somehow Won my Scott Fish Bowl Satellite League

I’ve played fantasy football for a very long time. In fact, I have proof of my first fantasy football league ever, which was on NFL.com back in 2010. To help put that into perspective, I am currently 21 years old, so I’ve literally been playing for over half my life.

In all those years playing, I had never done a Best Ball league. However, that changed in a big way last year. After three years of applying for the famous Scott Fish Bowl assuming I’d never actually get in, to my surprise I finally got into a satellite league last year.

For those of you who don’t know what Scott Fish Bowl is, it’s a giant fantasy football tournament involving a lot of charity work and bringing the industry together. The competition is separated into two sections. One section is the main tournament, where tons of fantasy experts play (pretty much anyone you can think of is in it), and the other section is satellite leagues, which consist of non-experts or “fans”. Given I’m a nobody, I was put into a satellite league.

Last year’s Scott Fish Bowl was year number 11. It’s a highly renowned league, not just because of the experts who play in it, but because of its unique rules as well. The satellite leagues were run as best ball leagues, which was already a new experience for me.  That means there are no moves throughout the season.  You draft a team and your highest scoring players are put into your starting lineup.  There are plenty of rules that will give you a rude awakening if you don’t read them carefully. On top of that, the rules are adjusted year-to-year. Here are some of the key rules from Scott Fish Bowl 11.

First off, kickers could be used in flex spots. While you might normally think that doesn’t mean anything, this was best ball, so it was easily possible for kickers to end up in your lineup. I drafted Graham Gano in the last round just for fun, and he ended up in my best lineup a few times during the season.  Another less unique, but still new rule for me, was it was superflex, meaning you can start a QB in your flex spot. I’ve always done one quarterback leagues, so actually valuing quarterbacks early in the draft was an eye-opening experience that I had to quickly adjust for. Unlike non-superflex redraft leagues, waiting on not only just one quarterback, but two quarterbacks did not seem like the best idea. Speaking of quarterbacks, the position itself had unique rules as well. Completions and incompletions factored into their point totals, meaning QBs with high completion percentages were valuable. That led me to draft Kirk Cousins in the fourth round, which would make me a madman in typical redraft leagues. Finally, first downs factored into points. This rule was a big rule for me, as after doing some research, led me to draft a key player for my success, which I’ll get into later.

The roster size was 22 players with the starting lineup consisting of 11 players. The makeup of the starting lineup was one QB, two RBs, three WRs, one TE, one superflex, and three flex spots. Defense/Special Teams were not a part of this league. It was also a point per reception but relative to the position (0.5 for RBs, 1 for WRs, and 1.5 for TEs). That special scoring led me to not worry as much about drafting pass-catching running backs compared to a typical PPR league, as well as raised my desire for a good tight end. Also, the draft featured third-round reversal, which considering I had the eighth out of 12 picks, I was completely fine with. On top of all that, the draft was a slow draft, once again something I’d never done before.

Playing in this league was like being in a foreign country.  Just playing in a best ball superflex league was new enough, but tacking on all the unique scoring and roster rules, it was a vastly different experience from any other fantasy league I’d been in. However, I was excited about the challenge. 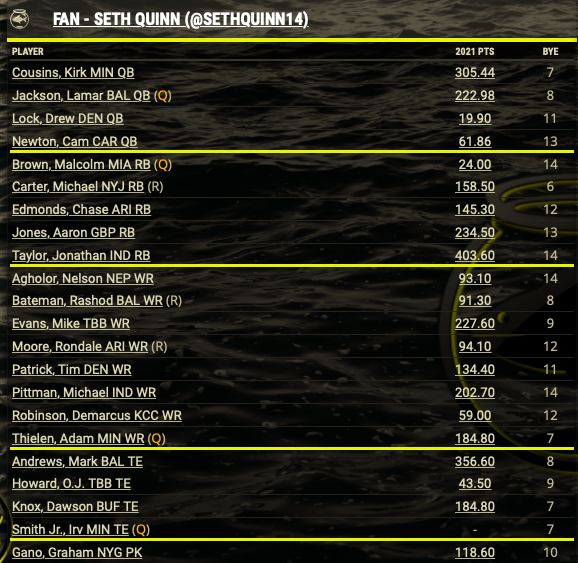 Going into the draft, I wanted to combine my redraft experience regarding draft strategy with new principles I came up with for best ball. While I wouldn’t go as far as to say my draft strategy was the exact opposite of my usual redraft strategy, there were some specific things that I would never do normally but decided to abide by for best ball.

Starting off with my first four picks, I wanted to make sure I got two quarterbacks and two running backs. My ideal target with the eighth pick was Lamar Jackson. I also considered other guys like Derrick Henry (who in hindsight was the right pick) or Dak Prescott. I quickly decided I preferred to go QB. Between Dak and Lamar, I went with the rushing upside of Lamar versus the questions of Dak Prescott’s health.  So in the end, I went with Jackson. I also considered Justin Herbert, but I didn’t have the guts to pull that trigger and instead hoped he fell to my second-round pick (he didn’t). With my second pick, after feeling sad about no Herbert, I turned my attention to the running backs. As mentioned before, one of the few things I heavily researched before drafting was first down stats. Interestingly enough, a running back by the name of Jonathan Taylor had easily the highest first downs the previous season despite limited playing time, so I decided I would snag him if possible. With no top-tier quarterbacks left, I decided to go with Taylor. I also thought about Aaron Jones, given he’s in the Packers offense and is good for a lot of touchdowns usually, but instead opted to wait on Jones, as I did with Herbert. This time, my luck changed. Jones fell to me at the third-round reversal pick, and I snagged him up as my RB2. The redraft in me was now satisfied, so it was time to complete the original plan. I really hoped Tom Brady would fall to me in the fourth round, but that was wishful thinking. After a run on QBs, I was forced to settle for Kirk Cousins, which I was fine with given the completion percentage rules. With my QBs and RBs settled, it was now time to smash pass catchers.

Another principle I abided heavily by that I normally don’t worry about in redraft leagues is stacking. For those that don’t know, stacking is when you pick a QB-WR/TE combo to increase your upside each week. When a QB has a good game, usually their best pass-catcher also has a good game, so that’s a good upside additive for best ball. Given that I drafted Lamar Jackson and tight ends have extra value in this format, I was ecstatic to get Mark Andrews in round five. I then managed to snag Mike Evans in round six, who would normally be too boom or bust and touchdown-dependent for my liking in redraft but perfect for my best ball strategy.  I was happy to get Adam Thielen in round seven to stack with Kirk Cousins. To fill out the rest of my roster, I picked Chase Edmonds, Michael Carter, and Irv Smith Jr. (stack with Kirk Cousins again).  Unfortunately, Irv Smith Jr. got injured not long after I drafted him, but thankfully I had solid depth as well. I waited on my third starting wide receiver because I didn’t really like any of the ones available. In round 11, I finally took Michael Pittman, who I liked considering he was a young player with a new QB. Now for that great depth I mentioned.

For the rest of the draft, I basically just targeted players I felt were good values. I also wanted to heavily focus on players who were either rookies or had significant roster changes around them or to them that could heavily influence their upside. That led me to pick the two Michaels of Michael Carter and Michael Pittman, two picks who I feel ended up being great values. I also managed to get Rashod Bateman and Rondale Moore using that principle. Bateman was especially exciting given that he completed a stacked with Lamar.

For the entirety of the draft, I really just hammered players I felt were good values with upside, both in terms of situation and stacks with other players on my roster. I picked Drew Lock and Cam Newton as my backup quarterbacks, two guys who were in QB competitions at the time but had some upside and value if they got the starting job. Neither did, but Cam Newton actually was in my lineup for one or two weeks during his time with Carolina later in the season. Drew Lock ended up playing a couple of games and may have been in my lineup one week. To stack with them, I took late fliers on Tim Patrick and Nelson Agholor. Patrick ended up being a great pick, while Agholor didn’t really pan out as I hoped (both as a fantasy owner and a Patriots fan).

I also made it a priority to take players in good offenses. That led me to pick guys like Dawson Knox, O.J. Howard, and Demarcus Robinson. Knox was a fantastic pick and basically served as a full-time injury replacement for Irv Smith Jr. The other two weren’t great, but I’m pretty sure both were in my lineup at least once. To add to my RB depth, I picked the infamous touchdown vulture, Malcolm Brown. He, unfortunately, got injured and didn’t do a whole lot, but I wasn’t too surprised by that given his boom or bust nature. With the last pick in the draft, I took previously mentioned Graham Gano, who ended up being a great value pick even as a kicker.

Looking at the MyFantasyLeague draft recap, the site has a cool feature called steals and busts. Looking at my picks, I grabbed four steals and one bust. I’m proud of only having one bust, who so happened to be Lamar Jackson, who was great early in the year and also stacked with Mark Andrews, one of my steals. My other three steals were Jonathan Taylor, Kirk Cousins, and Dawson Knox.  Limiting busts and snagging steals early in the draft were seemingly both huge reasons I won my 12-team division. Even with the Irv Smith Jr. injury, Dawson Knox served as a valuable replacement.

All-in-all, while I’d always felt like I was a good fantasy player, winning my division and at one point being eighth among all satellite teams really improved my self-confidence. To anyone reading this, I urge you to not only apply for the Scott Fish Bowl but consider trying new fantasy football formats. Even if you don’t feel too comfortable with your ability as a player, fantasy football in the end is all about having fun, so trying new things within fantasy football is never a bad thing. My strategy for this big tournament wasn’t anything too complicated. I didn’t have in-depth rankings. I actually used to make rankings but stopped doing so, as I feel more comfortable with following my intuition on players based on research and past experience, and how the draft board is playing out. You don’t need to be confined to rankings or put in a ton of time pre-draft. All you really need to do is trust your gut and be content with how things play out. That is essentially what I did, and now I’ll be playing in Scott Fish Bowl 12, but in the main competition with the bigger fish (pun intended).