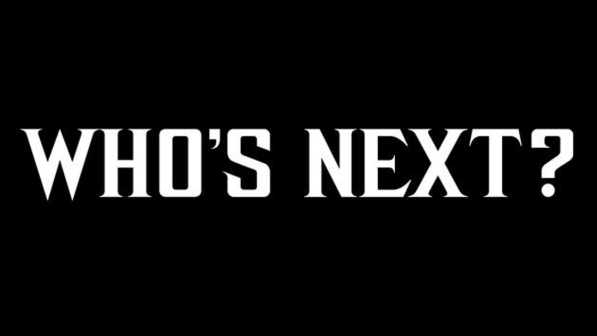 Identifying the Next Top-12 RB

Most fantasy players are aware of the advantage of having great RBs is for fantasy teams. Position scarcity leads to RBs carrying more value than WRs in the early rounds of fantasy drafts, especially when considering how deep the WR position is now. This leads to a constant search for that next RB that launches himself into RB1, or top-12, status. In 2019, Aaron Jones and Austin Ekeler found their way to excellent RB1 seasons, and those who took chances on these players in the middle rounds of drafts profited heavily from this. Luck should be considered as part of the equation, but we can also identify common trends or thresholds that RB1s tend to have. We can then use these commonalities to help with identifying the next man that will earn RB1 status. 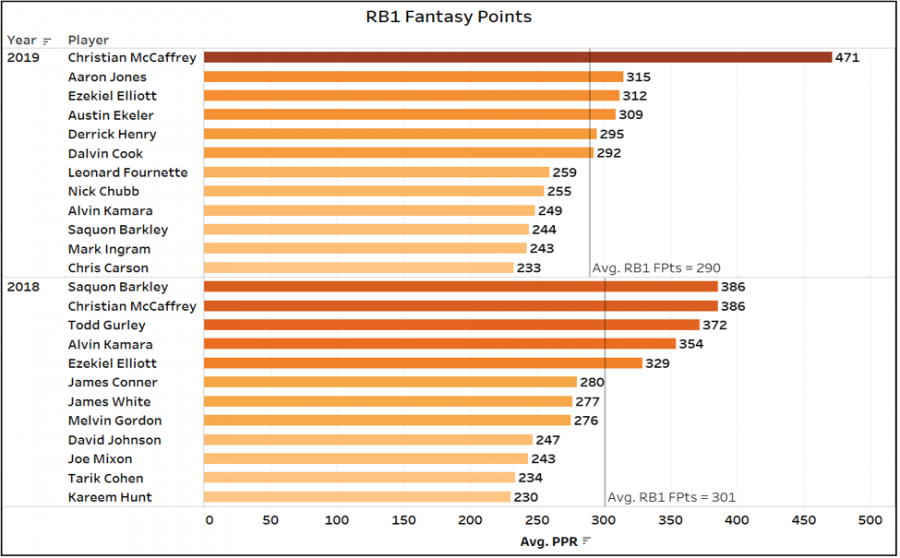 The cut off for RB1 production has been around 230 PPR points for the last two years. There was a slight drop off with average PPR points by an RB1 in 2019 although. It’s easy to see that 2018 had better performances from the top 5 RBs than 2019. Nonetheless, we see a minimum threshold to expect out of an RB1. This metric is more for reference as it won’t be very useful when attempting to find the next RB1. Players who have achieved this are at RB1 status already. So let’s get into stats that may be more useful with identifying the next RB1.

Let’s look at the breakdown of touches an RB1 has received in the last two years. The number under each player’s name is the total amount of touches that RB received on the year. 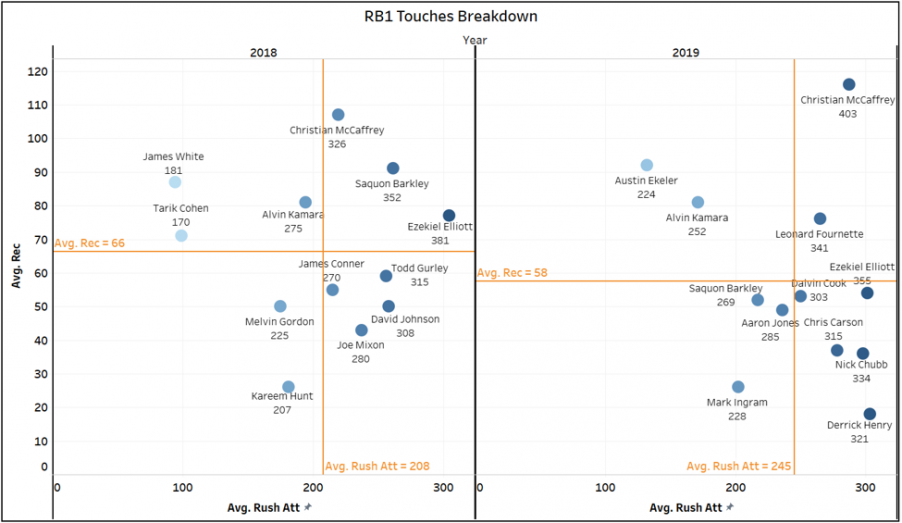 The importance of this is quite obvious but defining the number of touches an RB1 receives is still very useful. Here, we see that 2018 RB1s had an average of 66 receptions and 208 carries for a total of 274 touches on the year. In 2019, we see the average for total touches increase due to average carries seeing a large increase. 2019 RB1s had an average of 303 total touches with 58 being receptions and 245 being carries. Lastly, the lowest amount of touches for an RB1 was 170 in 2018 (Tarik Cohen) and 228 in 2019 (Mark Ingram). So, the number of touches for an RB1 was quite different in 2018 than in 2019, but the idea is that opportunity is one of the most important factors for RB1 production. Looking ahead, we can split the difference and use 200 total touches as a minimum needed for RB1 production.

While on the topic of touches, it’s important to discuss inside the 5 and inside the 10 opportunities. These touches are important as they explain how much of the goal line and end zone work RB1s typically see and their opportunity for TDs. Since TDs are volatile and unpredictable, I want to focus on opportunities with high leverage touches versus TDs themselves. 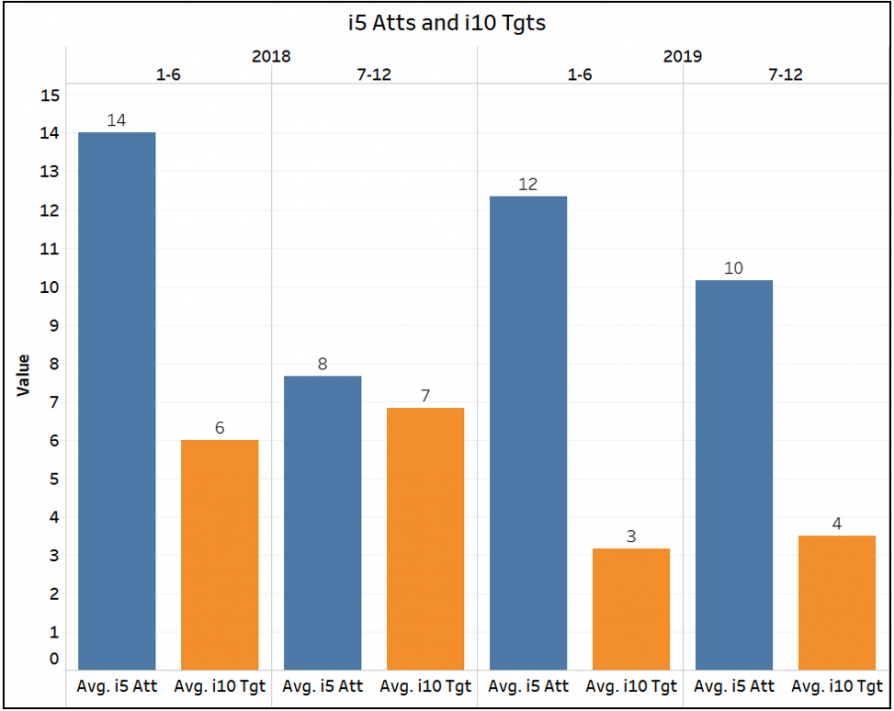 I decided to take a look at these stats with the top-12 RBs split into two groups, 1-6 and 7-12, to see if there is a noticeable difference between these two groups of RB1s. What is shown makes sense, RBs 1-6 tend to gather more inside the 5 rushes and comparable inside the 10 targets as RBs 7-12. Aside from this, RB1s tend to receive 10+ i5 rushes and a few inside the 10 targets on the season. Again, this is fairly obvious but hugely important to note. When looking for the next RB1, we need to make sure there is an opportunity for goal-line work.

Now I want to dive into what RB1s did with their touches. So, up next is rushing and receiving yards for RB1s the last two years. 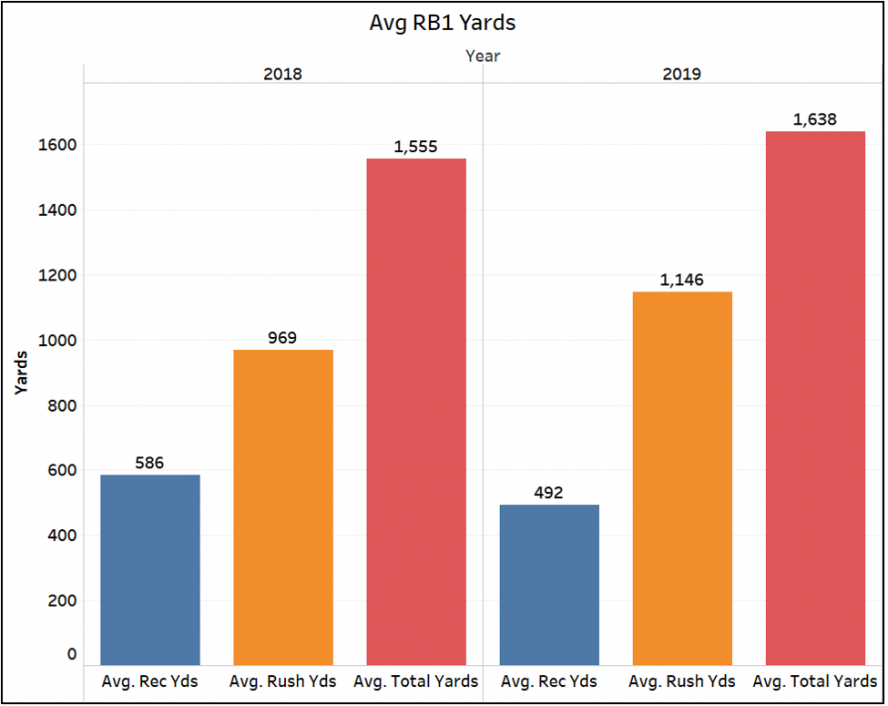 Here we see RB1s in 2018 achieved that status differently than RB1s in 2019. Combining this with what we saw for average touches for RB1s, 2018 RB1s got it done through the air more than 2019 RB1s. Either way, top-12 RBs are usually efficient with their touches and gather around 1600 total yards on average. Understanding this, we can eliminate low yardage running backs when looking for the next RB1.

Knowing this, let’s take a look at RB1 total yards by player to see a minimum threshold to expect. 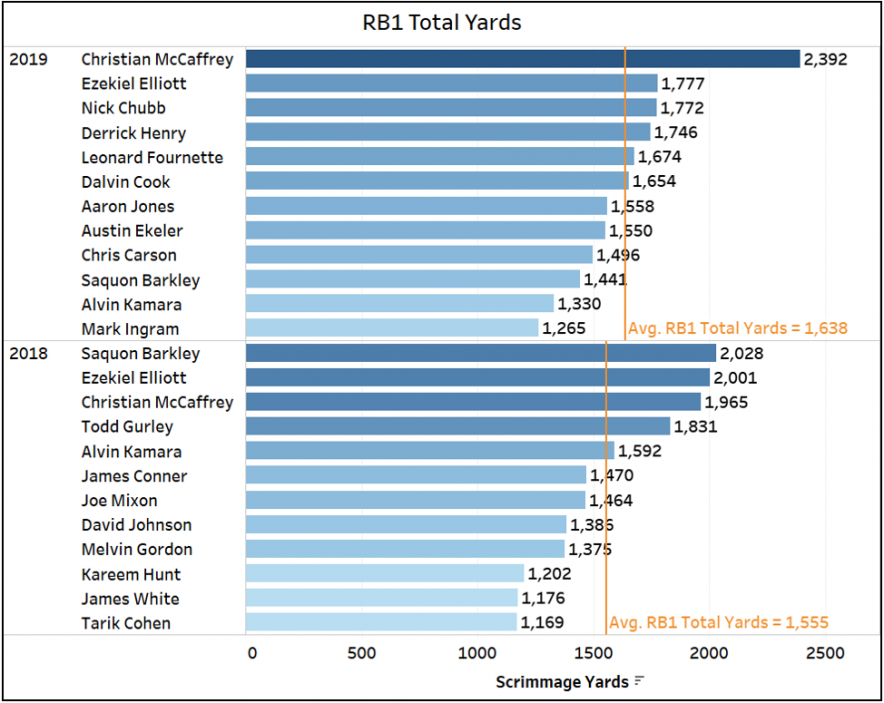 In 2018, we see two passing down specialists sneak their way onto the top-12 list even with fewer yards than the rest of the RB1s. This makes sense for PPR leagues as Cohen and White made up for the lack of yardage with all the receptions they gathered. Other than those two, we see that 1200 total yards is about the minimum that RB1s have had for the past two seasons, and this gives us a good idea of what is needed for RB1 production when speaking about yardage.

Lastly, to add one more layer of context to the overall story, let’s look at OL rankings for RB1s. 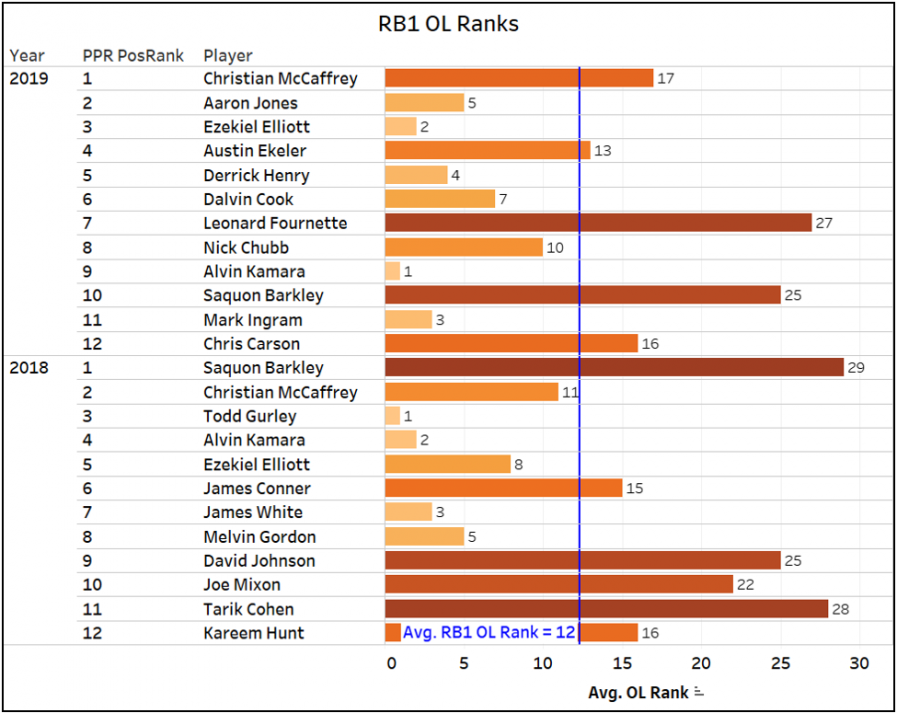 Over the last two years, RB1s tend to have an above-average offensive line. As shown above, the average OL rank for top-12 RBs is 12th in the league. Also shown is another logical point in that RB1s 1-6 tend to have better OLs than RBs 7-12. Knowing RBs have a better chance at a top-12 season with an offensive line that is 12th or better, we can use this to aid in the search for the next RB1. This is a bit difficult although, as we do not know how good each team’s offensive line will be, we only know how good they were last year. 2019 OL rankings will get us a close guess at what we can expect from offensive lines in 2020 as long as there were no key departures.

What we’ve seen so far makes it clear that a single one of these metrics cannot be used as a stand-alone predictor. There are many layers of context to the story and using a combination of these stats will be necessary when trying to identify the next top-12 RB. Enough stats and charts. Let’s talk about some running backs that could launch themselves into the coveted top-12 territory based on what we’ve learned.

Miles Sanders: I know, this one is obvious, and he’s being drafted as an RB1 already. I’d be a fool not to mention him here though. A few points to consider:

People, draft Miles Sanders and do not doubt it for a second.

Josh Jacobs: Again, this one is fairly obvious. It’s worth noting that he’s currently being drafted as RB13, technically not RB1 status but close. Either way, he has a very good chance to pay off as an RB1 this year. The Raiders just have to use him slightly more in the passing game, which Jon Gruden has said they plan on doing. Here’s an article stating that Gruden plans on getting Jacobs more carries and receptions this year.

This all points to Jacobs ascending to RB1 status this year, meaning he’s well worth his second-round ADP.

Kenyan Drake: Wow, what a second half to 2019 for Drake. Arizona finally unleashed Drake as a workhorse back and it paid off mightily for fantasy players with him on their teams. He finished as RB17 in PPR leagues while being extremely under-utilized in Miami for the first half of the season.

Besides the offensive line, everything points upward for Drake’s potential to finish as an RB1. According to FantasyPros, he’s being drafted as if he’s already an RB1, so his price is relatively expensive. Considering how the Cardinals utilized Drake in the back half of last year, I’d be more than willing to take a gamble on Drake at his current ADP. His potential is very high as he showed last year.

Return from the Depths

James Conner: Conner already finished as an RB1 in 2018, but now he’s being drafted as the RB21 this year. I understand the fear about his injuries, but even if he doesn’t play a full 16 games, Conner can easily outproduce his RB21 price. The Steelers have shown they love their workhorse backs, and they don’t have stellar depth behind Conner. Yes, they added Anthony McFarland, but he’s not a big threat to Conner’s workload. He’s an under-sized, big-play threat, and I don’t expect him to see 10+ touches a game. We’ve all seen that Conner can be a top-10 fantasy back as the workhorse for the Steelers. Smash the draft button when Conner makes it to you in the 4th or 5th round of your drafts and thank me later.

Lev Bell: Similar to Conner, Lev Bell has already finished as an RB1 but is now being drafted as RB18. The Jets haven’t been fantasy-friendly for some time, but this is Lev Bell. Just last year he finished as RB16 in that well below-average offense. The Jets have attempted to improve their putrid offensive line from last year as they have 5 new starters going into 2020. In 2019, that offensive line only averaged .7 rushing yards before contact per attempt, which means Lev Bell had nowhere to run. It’s fair to expect the line will be at least slightly better than in 2019, meaning Bell should have more opportunity to gather yards with his impressive vision. Bell is still an extremely effective back and will continue to be the workhorse for the Jets. I’m very comfortable investing in Bell in drafts as it feels like he’s being drafted at his floor right now.

If I haven’t lost you yet, thanks so much for sticking with me through this in-depth look into top-12 RBs. There are many layers of context to an RB1, and I know I didn’t cover everything. Even breaking it down into these few categories makes it more digestible and easier to identify the next back who could ascend to the RB1 ranks. At the very least, it gives us some insight into which backs are unlikely to achieve top-12 status. I’d love to hear from you on who you think could be the next RB1!