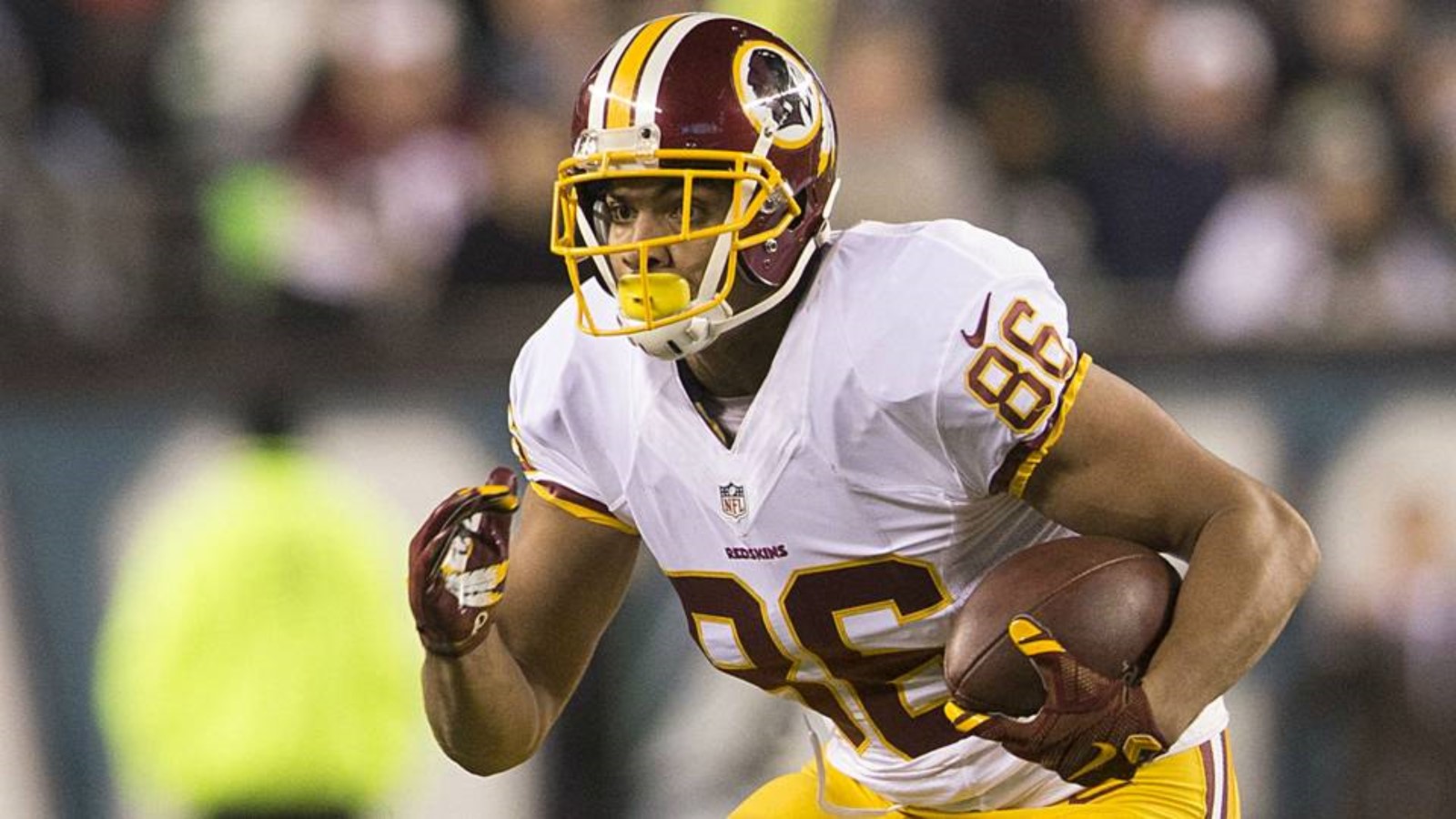 Is Jordan Reed a Sleeper

I’m sorry if my writing is a little bit groggy this morning but I spent most of the night listening to the 24 hour #SFBPodathon, so you will have to forgive me for this. I was trying to stay up with it all night, but this old man crashed at 2:30am.

In case you have been living in a cave the SFB or Scott Fish Bowl is a 900 team, 75 division league Scott Fish puts on every year to benefit FantasyCares.net, a cause that raises money for Toys for Tots. If you are reading this and haven’t been involved, please do so. It is a great cause and so far they are close to raising $35,000 this year.

So with that in mind I decided to award a $25 donation in the name of the person who gave the best and most concise answer to today’s question.

Today’s Twitter Question of the Day: After the top three tight ends (Gronk/Kelce/Ertz), who is your “must-have” tight end this year and why?

@eddie_strait - Jordan Reed is so cheap (relatively speaking) that I can't pass him up, especially if he's my second TE.

@C_Southwick - Not saying I’d take him 4th but at value give me George Kittle all day. He and Garoppolo had some real nice chemistry going down the stretch last year. Not only are his athleticism numbers off the charts, watch him play…. dudes gonna be a baller.

@Mr_Groll – Kyle Rudolph. Cousins loves his TE and so does Defilippo. Plus he’s kind of playing to stay around. Zero dead money hit if they cut/restructure in 2019 and he’s got a big cap number.

@Frank_Scandurro - Kyle Rudolph, Cousins loved Jordan Reed and even got him to TE2 in 2016. Rudolph has been more productive then Reed in the past. Cousins will lean on Rudolph who can stay healthy and play all 16 unlike Reed.

@JasonTran - Fine, I'll give my secret out for a good cause. Luke Wilson. Can get him super late in drafts. Ebron was able to produce TE1 production in the Lions offense. Wilson can be a red-zone beast.

@IrvingHarrison - Kyle Rudolph. The loss of TE friendly coach Shurmur will be offset by red zone TE loving QB Cousins. You like that!!!

Mark Spafford - I'm going to go with Jimmy Graham here, only because I like his offense and QB more than the other popular choices.

@joshbrickner - Austin Seferian-Jenkins. He's going to be a weapon in both the RZ & the short passing game for Jacksonville this season. Think he will benefit from the TE Premium PPR in #SFB8.

@DynastyOuthouse - Eric Ebron!! I fully believe he was brought over to INDI to be the guy. New scenery will do well for him. He showed at the end of last season he was capable up putting up stats. plus Reich knows how to use TEs so everything’s coming up Ebron!

@brandonxx360xx - Jack Doyle is the TE to own in Indy. Not to mention that if Luck comes back he has already shown that he loves to throw to Doyle. See the 2016 Doyle/Allen split if you feel threatened by Ebron, Doyle still was a great value. Plus outside of TY who else is catching balls in Indy?

Shane P. Hallam  - Evan Engram. With the weapons for the Giants, Engram will be open a lot as defenses focus on Beckham and Barkley. He showed great pass catching talent and was trusted by Eli last year. There is no reason he can't match the production of the top TEs and be a steal.

@TheyWereKones - Evan Engram. What he did last season was one of the best rookie TE seasons on record. I know a healthy OBJ will command a large market share of opportunity, but I still expect another great season out of Engram as he progresses in his second year.

@Fife1919 - Jimmy Graham is the man you need to roster this year I do believe. Aaron Rodgers, the answer is always Aaron Rodgers.

@SportsSavi - Gotta go with the bargain of Washington TEs. Not enough people talking about the Alex Smith Vernon Davis reunion and, when healthy, Jordan Reed is phenomenal.

(Editors Note: The Washington TEs might be the first time in history we see a TE handcuff)

Jayson Tzley – Greg Olsen and Evan Engram are my targets. High end production but cheaper than the 3 you listed.

@thediamondmike - Evan Engram: The impact of Saquon Barkley and the return of OBJ will open up the offense. I like him in the Pat Shurmur system. He's a big red zone target.

@mattkdelima - Evan Engram. ODB takes a double team, Barkley draws a safety down in the box. Shepard keeps them honest on the outside. Engram goes in motion and he's matched up against a LB/S or #3 corner in the slot. Engram wins with speed vs LB or size vs the CB/S. #Breakout

@chaz1499 - Sign me up for George Kittle. Jimmy G has been molded into leaning on a TE during his time with the Pats. With the CB play in the NFC West this will open the field up for Kittle to more than hit his value. Find that guy that you can go to on third downs!

@FFDawg88 - one TE that stands out is Delanie Walker, should have a great season. Most likely you'll get him as a value in your draft, he's getting drafted as a TE 6-8, I'm projecting him to be a top 5. He's Mariota’s security blanket.

Jason Duvall - Jordan Reed is hard to ignore if he's taken mid-late rounds. I understand his injury history and the resentment many have for him. However, if somehow he can actually put together a full season, he could be the #1 TE.

@816podcastingC – Austin Sefarian-Jenkins, Bortles finally has a receiving option that he can depend on. He is a big target that will be hard to miss. Asj should own the redzone in jax!

@Roto_Wan - Trey Burton is the TE you seek. He's a superior athlete, having played every skill position at Florida. Matt Nagy will bring his Andy Reid offshoot (likely similar to Doug Pederson's system) to a revamped Bears offense. He also scored 5 TDs on 31 targets in 2017.

@specDAKular - Jordan Reed is going to put it together this year. Alex Smith loves throwing to the tight end. Reed stays healthy and produces big time in a contract year.

Matt Schauf - Greg Olsen is Zach Ertz, but 2 rounds cheaper and with a longer record of top-level production.

@bftgpod - Deep sleeper, Charles Clay..... why? Because who else is Buffalo throwing the ball too?

@Bucn4life - If I miss on the big three, I like to wait until the very end. I'll take George Kittle. The natural progression of Kittle and Jimmy G in the Shanny offense. Plus, Matt Ryan scuffled Year 1 with Shanny. Jimmy G came in the middle of the season and looked good. I think everyone takes a nice step forward this year.

@JeremySpolarich – Kyle Rudolph, I believe he’s #2 the last 3 years in TD’s scored behind Gronk and Kirk loves himself some TE. Top 3 if he plays all 16...

@schmitty088 - I think Greg Olsen will have a nice bounce back year. People always seem to forget about him but Cam loves throwing to him and he always been a great red zone threat.

@bagheadscott – George Kittle. Still under the radar mostly, relatively inexpensive & super athletic with plenty of opportunity tethered to a good QB being led by one of the more creative offensive minds in the league.

@BahnerFFett - I think Kyle Rudolph is the guy. He’s relatively cheap, and Kirk Cousins has shown his affinity for throwing to the tight end position. My dark horse is Nick Vannett. Someone has to make up for the lost Jimmy Graham production, and he’s essentially free.

@Dingas4 - Dare I say Jared Cook. Can get him really late and I believe the Raiders passing game will be explosive this year.

@_JamesTheBrain - David Njoku. Tyrod used Charles Clay a good amount in Buffalo and Haley has used his tight ends (like Heath Miller) a lot in the past. With Landry running short underneath routes it opens up Njoku to stretch the seam and utilize his elite speed and athleticism

@Trotta23 - Jordan Reed - Alex Smith has targeted his TE 239 times over the last two years, the most In the NFL over that span. When healthy Reed is as explosive a weapon in the passing game as anyone on that roster. Health is a MAJOR concern but at his current ADP he provides tremendous upside.

@FFDynasty101 - I think it should be Greg Olsen. A healthy season and is still Cam's favorite target. Opponents cant focus on him with other receiving threats like DJ Moore and Christian McCaffrey there.

This question had the most responses of any of the Twitter questions and I want to believe it is because the question is so good, not because I offered a prize. That’s my story and I’m sticking to it.

Thee are a ton of good responses here and I definitely have some favorites, but I want the Twitter and Facebook crowd to tell me who they think had the best response. You can tweet me at @Fantasytaz and all I ask is that you don’t pick your own answer.

For me while I like most of these picks, but once again my pick isn’t listed above and that’s Benjamin Watson. He rejoined the Saints this offseason after finishing as a top 12 TE in Baltimore last season.

Now he goes back to the Saints where he had his best season as a pro in 2015 with 74 receptions, 825 yards and six touchdowns. If he comes even close to those numbers he will once again be a top 12 finisher and you can get him very late in your drafts. His current ADP is in the middle of the 17th round. CHAMPIONSHIP!!!