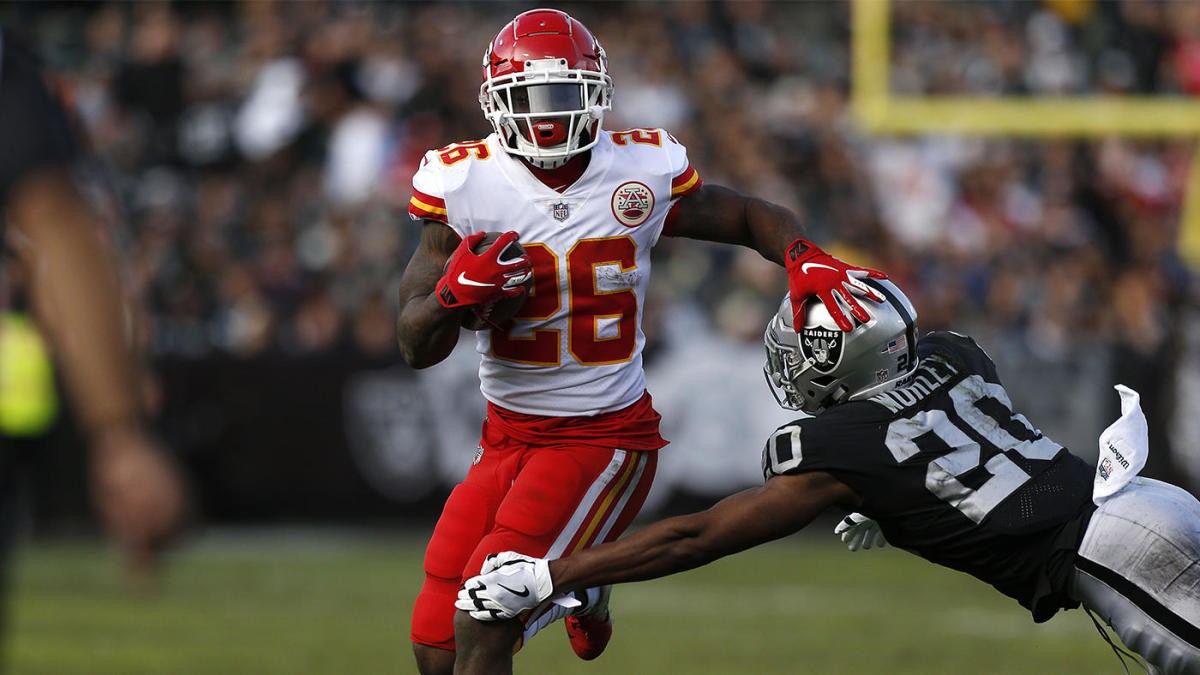 Each year when we reflect back on the NFL season that was, it's easy to have 20/20 vision in hindsight and look back at mistakes you made in the draft.  In 2018, guys like Royce Freeman and Derrick Henry went in the 5th round which proved, at least early in the season, to be much too rich of a draft pick for the respective roles they had early in the season.  If you drafted Royce Freeman or Derrick Henry in 2018, you likely drafted them as your RB2, and if you did so, you were likely disappointed and probably cut them after a few weeks.  It pains me to say this, but Jordan Howard went in the 3rd round in many drafts last year and that proved to be too costly as he clearly didn't fit into the Bears' offensive scheme and he didn't come through unless he scored.

In 2018 fantasy drafts, Sony Michel went in the 9th to 10th round range, sometimes going undrafted because his knee was banged up early, but he proved to be a valuable player down the stretch, serving as New England's primary early down running back.  At this time last year, Chris Carson and Rashaad Penny were both going in the 8th to 10th round range, and you basically had to pick which player you thought would win the job or get consistent carries on a weekly basis.  Carson ended up being the correct pick in 2018, but it might not play out like that in 2019.  Heading into 2019, now that all training camps are underway and ADP is starting to round into form, there are a few guys mentioned below that are being drafted fairly early that either offer some downside compared to players drafted around them or are still wrapped up in position battles similar to the aforementioned players.

I took a look at ADP data from NFC data from July 20, 2019 through the present and while I was going through it, a few players stuck out to me as landmines that we may be talking about as "regrets" in January 2020.  Damien Williams is first on the the list, as he has been going 23rd overall.  If you draft somebody in the tail end of the second round, that player should be a sure fire RB1 or RB2 for the entire season barring injury.  Williams is slated to be the starting RB in Kansas City but he's never been trusted to be the lead dog in the backfield for an extended period of time.  I understand there is intrigue surrounding Williams because he is going to be the starting RB in a very good offense, but why would you take Williams when you could draft a bottom end WR1 or high end WR2 like Keenan Allen at that same spot, who would be a much safer bet, or a player like Marlon Mack, who has been going 27th overall who proved capable of handling a full workload over the last half of the 2018 regular season.  In 2018, even after Kareem Hunt was released, Damien Williams only eclipsed 10 carries three times including the playoffs.  For all of those reasons, I will pass on drafting Damien Williams at his current ADP and honestly I wouldn't draft a player like that until around the 5th round.

Aaron Jones has been going early in the 3rd round, 27th overall.  Aaron Jones has had a myriad of injury issues through his first two seasons in the league, going down mid game twice in 2017 with MCL injuries, missing 1 and then 2 games from each respective MCL injury.  In 2018, Jones missed time in training camp because of a lingering hamstring injury, missed the first two games of the season due to suspension and missed the final two games of the year with another MCL injury.  Aaron Jones is a stud, he can make plays, and that's clear based on his 5.5 yards per carry mark from 2018, but there are a lot of question marks surrounding him due to his injury and discipline issues.  Adam Thielen (ADP 28), Marlon Mack (ADP 32) and Mark Ingram (ADP 44) are all being drafted after Aaron Jones, and all of those players may end up being safer, more consistent performing draft picks than Aaron Jones.  Don't get me wrong, the upside is definitely there with Jones, but at 27th overall, you are paying a hefty price for him and if he doesn't gain 1,500 yards from scrimmage you may regret that pick come January 2020.

Phillip Lindsay is a tremendous competitor and football player.  However, he has been getting drafted towards the tail end of the 4th round at 46 overall which is a little too rich for me.  Lindsay only averaged 2.35 yards after initial contact last year which wasn't very good while his counterpart Royce Freeman averaged 3.22 yards after initial contact which was a mark similar to Zeke Elliott and Todd Gurley.  Lindsay is slight of frame and Freeman is built more like an every down back which gives me pause when drafting Lindsay 46th overall because when you draft him there, you are likely drafting him to be your RB2 but he may not have the same workload as he did in 2018 if Freeman emerges.  Players going just after Lindsay include DJ Moore (ADP 47), David Montgomery (ADP 49) and Sony Michel (ADP 56).  DJ Moore figures to break out as the #1 WR in Carolina this year, David Montgomery will be the lead RB in an explosive Bears offense and Sony Michel had 10 games with 15 or more carries last year including the playoffs.  I would rather go with Moore, Montgomery or Michel over Lindsay this year.  In my view, Lindsay should be drafted more like a flex than a RB2.

The Seahawks drafted Rashaad Penny in the first round of the 2018 NFL Draft and they didn't make that pick to let him sit the bench.  Penny was overweight for much of his rookie year and by all accounts he is a slimmer, trimmer, better pro in 2019 than he was in 2018.  That being said, it's likely that Penny overtakes Chris Carson as the starter in Seattle this year, who has been getting drafted 61st overall.  If you draft Chris Carson in the late 5th or early 6th round, you are either getting a 1,000 yard rusher or you may be paying a premium for a player that won't have a consistent role throughout the season if Penny, who is going around 74th overall, beats him out.  Going just after Carson at his current ADP are OJ Howard at 62 overall and Dante Pettis at 67 overall.  I understand there is a chance that Carson wins the starting job and repeats as a 1,000 yard rusher in Seattle, but given the presence of Penny, you need to evaluate if you want to take that chance or draft a difference making tight end in OJ Howard or a guy like Dante Pettis, who figures to have a lot of upside as the #1 WR in Kyle Shanahan's offense with Jimmy G slinging the rock.

Darrell Henderson has a current ADP over 72 overall.  This situation reminds me of the Ben Tate/Arian Foster situation from a few years back when Foster was beginning to have injury issues and Tate's ADP shot up to the point where he was almost being drafted as an RB2.  As of right now, Henderson is no more than Todd Gurley's most likely handcuff assuming he can beat out Malcolm Brown, and you are paying way too much for him if you draft him 73rd overall.  Instead of drafting Henderson, you could have a player like Rashaad Penny at 74 who could legitimately beat out Chris Carson for the starting RB job in Seattle, Lamar Miller at 78 who is the starting RB for the Texans, Baker Mayfield at 77 who is likely to be a sure fire QB1, Courtland Sutton at 81 who is likely going to eclipse 1,000 yards receiving this year, or stud QB Carson Wentz at 94th overall.  I understand it's smart to wait on drafting your quarterback, but if you are considering a legitimate QB1 or Darrell Henderson in the 7th round, you need to ask yourself if you would rather have a high end handcuff at that spot or lock in your starting QB and likely not have to worry about that all year.  I would take the QB there and take a high upside RB handcuff later in the draft.

It pains me to say this, but I think that the Eagles running backs, including my guy Jordan Howard, could be landmines this year.  Doug Pederson has demonstrated over the years that he isn't likely to roll with one lead back, but rather, he has guys fill specific roles within the offense.  The Eagles signed Darren Sproles this week which likely means they want him to fill the pass catching role in their offense.  That leaves Jordan Howard and rookie Miles Sanders to fight for early down work.  Jordan Howard has an ADP of 95 and Miles Sanders has an ADP of 83.  Neither ADP makes drafting them prohibitive, but if you pick either of those players you are banking on them being the recipient of the early down work in Philadelphia.  Jordan Howard played the last two years behind banged up offensive lines in Chicago and moreover, in 2018, the Bears scheme didn't fit his skillset.  Miles Sanders is quite elusive and can gain yards after contact, but he did deal with a hamstring problem through much of the offseason program and we haven't seen him play a down of NFL football yet.  In my view, you are only taking these guys at their ADP's if you are in trouble at the RB position because you went WR heavy early in your draft.  If you draft Sanders or Howard, you are likely passing on guys like Dede Westbrook, Golden Tate and Russell Wison which are all, at least at this time, safer picks.

In sum, we learn lessons about our drafts at the conclusion of each season.  All of the aforementioned players I identified as potential landmines could have great seasons, but at the same time, you need to be weary drafting them because if you do so, you are likely bypassing a more consistent, more proven option, opting to go for the player who could be in a somewhat unstable situation.  At the end of the day, it's your decision and you need to draft based on the level of risk you are willing to accept.  Good luck in 2019 and follow me on Twitter @Coachriggall.