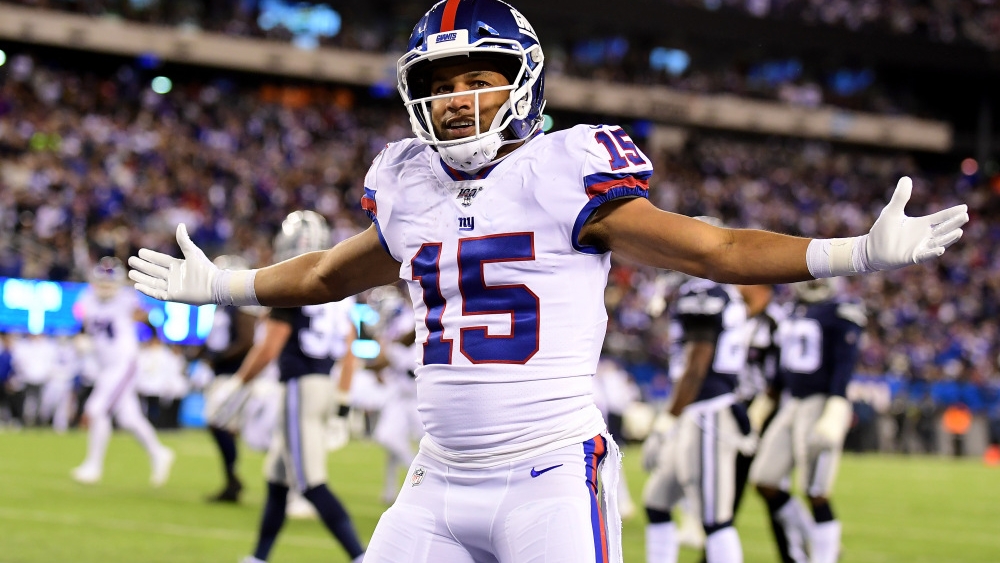 .Late Round Veteran Wide Receivers for 2020

If you are anything like you me, you draft several running backs with your first several picks, then find yourself deciding what position you want to fill next. In super flex, this strategy often leaves us with some low-end WR2’s or even WR3’s. When you inevitably pass up that top tier receiver for another RB2 and need someone to help your team now, then keep in mind this list of veteran receivers that will score some points and hold some actual value on your fantasy football teams in 2020.

The ageless wonder, Emmanuel Sanders, just turned 33 and is looking forward to his 11th season in the NFL. One thing I have learned from watching Sanders all these years, is he doesn’t mince words when it comes to quarterback play. Sanders has caught passes from Ben Roethlisberger, Peyton Manning, a string of below average quarterbacks in Denver, then Jimmy Garoppolo, and now Drew Brees. Sanders has already been putting in some work with his latest QB and I am certain they will find that chemistry before the season starts. Although I haven’t done projections for receivers yet, I expect a stat line somewhere around 75 receptions, 900 yards, and 5 touchdowns. His ADP may be a bit too high for these projections, but if you missed out on the top guys and find yourself in desperate need of a veteran receiver you can rely on, look no further than Emmanuel Sanders. 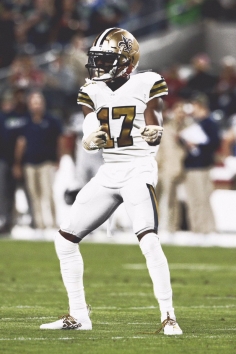 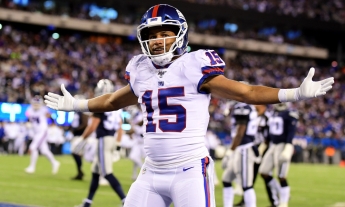 Golden Tate has been a reliable receiver for the last decade and is coming back for his second season with the Giants. Even though Tate only played in 11 games last season, if you extrapolate the statistics, his 16 game total for last season would have been 71 receptions for 973 yards and 8 touchdowns. That was with rookie Daniel Jones throwing him the ball. I’ll take this any day from someone I just drafted in round 15 of my most recent dynasty startup. In my case, I drafted guys like CeeDee Lamb and Jalen Reagor earlier, and I needed a veteran that could produce this season so I went with Tate. Daniel Jones looked solid as a rookie and he could take a huge leap forward this year, and Golden Tate would certainly be one of the beneficiaries of this. Although Tate will be 32 by the time the NFL season starts, I believe he still has a couple more productive seasons ahead of him. Plus it doesn’t hurt to have a young and emerging quarterback throwing it to you. 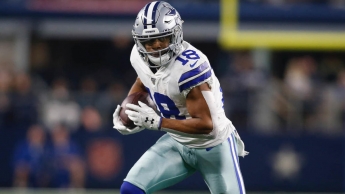 We can be real, just like the others listed before him, Randall Cobb’s best days are behind him. But we can’t forget the Texans just gave Cobb a nice 3-year, $27 million contract this offseason after the team traded away their star receiver, Deandre Hopkins. There are a ton of vacated targets due to Hopkins departure, and I have to throw in that 2019 was Cobb’s best statistical season since 2015. Even with Brandin Cooks as the team’s presumed number one option, Cobb finds himself in a unique situation where he could realistically wind up as the team’s number one wide out in 2020 due to Cooks’ and Fuller’s inability to stay on the field for a full 16 game season. I think Cobb has some serious potential value this year and is worth that late round dart throw. 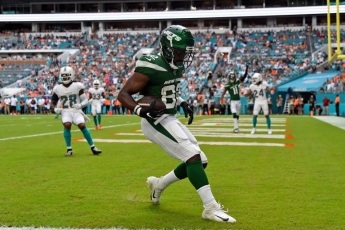 Crowder is entering his 6th season in the NFL and has been pretty consistent year to year aside from the injury he suffered in 2018 that forced him to miss seven games. Although we have likely seen his ceiling, we have also seen what he is capable of and that is being a serious threat at wide receiver in the NFL. If he hits all of his career bests this season, we are looking at 78 receptions for 847 yards and 7 touchdowns. Those are solid numbers for someone you can get in rounds 12 and beyond. Most of us expect him to top those numbers this year and you can put me in that camp as well. Even though the Jets brought in Breshad Perriman and drafted Denzel Mims this off season, I don’t see those guys taking away from Crowder’s volume, at least in 2020. Sam Darnold needs to take a big step this season, and Crowder stands to benefit the most from this if it happens. Jamison Crowder had 122 targets last season and is coming back in 2020 as the assumed WR1 for the Jets. He may be the best late round receiver for you to target in any format, and especially in PPR. You just have to look past Adam Gase… 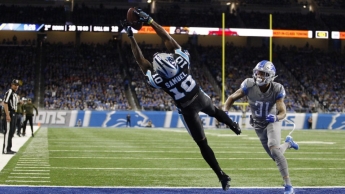 I had high hopes for Curtis Samuel in 2019, but Kyle Allen dashed those dreams. I am a huge fan of Curtis Samuel, and he is probably my favorite player on this list. He has the speed and burst to score major points in fantasy football. Samuel had a relatively disappointing season last year. Even though he still managed 54 receptions for 627 yards and six touchdowns, this was on 105 targets and Samuel has seen the third highest rate of uncatchable passes since 2018. 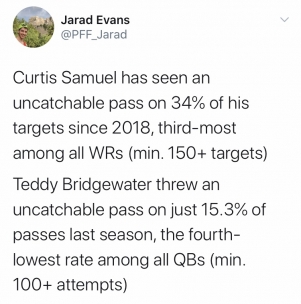 Samuel had many missed opportunities in 2019 due to subpar quarterback play and hopefully the addition of Bridgewater will benefit this talented receiving corps. Samuel has a tall ceiling, and if Bridgewater can complete half of what Kyle Allen missed, Samuel is in line for a major breakout season.

“Third-and-Renfrow” could very well be a thing of the past with the additions of all the new weapons in Oakland Las Vegas. The future of the Raiders at wide receiver looks to be Henry Ruggs III and Bryan Edwards, both insanely gifted athletes that will be long-time NFL players. Renfrow will also be competing for targets with veteran and locker room leader, Tyrell Williams, as well as breakout tight end Darren Waller. This is a large barrier for Renfrow to overcome, but here are several reasons why I think Renfrow is a nice late-round stash for your fantasy football teams. Hunter Renfrow developed nice rapport with Derek Carr during the 2019 season, and Renfrow is coming off a decent rookie year with 49 receptions, 605 yards, and four touchdowns. Receivers don’t typically breakout in year one, so we shouldn’t expect much from Ruggs, and especially Edwards who is coming off a foot injury that limited his preparation for the NFL combine. Even if you believe those two will be the one-two punch down the road like I do, Renfrow is probably the better option for 2020. It isn’t out of the question for him to have sustained success either, and at his current ADP, he’s a great “why not?” option for both, redraft and dynasty.