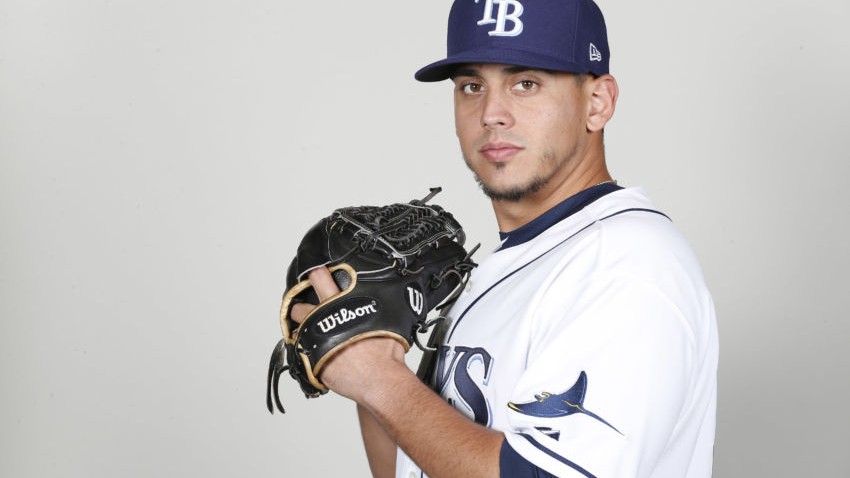 Yoan Moncada, 2B Chicago White Sox. It wasn't a very good week for Yoan Moncada. He appeared in only three games, went two for ten (.200), and struck out twice in each of his three games. Through Week 8, Moncada has 49 strikeouts in 169 plate appearances and I would like to see a little more plate discipline from him.

It will be hard to keep Austin Meadows down in Triple-A if he keeps playing like he has the last few weeks.

Austin Meadows, OF Pittsburgh Pirates. Austin Meadows had an absolutely miserable start to this season, but as the temperature warms up, so is his game. Last week, Meadows went 12 for 26 (.462) with a home run, four RBIs, seven runs and even stole two bags. He is turning his season around, and with Starlin Marte suspended and Gregory Polanco dealing with a (hopefully) minor, ankle injury, his services may need to be called upon, sooner rather than later.

Lewis Brinson, OF Milwaukee Brewers. Lewis Brinson only played in three games this week, but he made the most of them. He went four for 12 (.333) with an RBI. In addition to his four hits, he walked twice, and in his six times on base, he managed to score five times. Not too shabby.

Amed Rosario, SS NY Mets. Another typical week for Mets future shortstop, Amed Rosario. He hit almost .300 with three RBIs, four runs and two stolen bases. Batting average, runs and steals should be his major fantasy contributions when he arrives in the Big Leagues, so it was a decent week for Rosario. I think we should see him in New York in the next month or so.

Gleyber Torres, SS NY Yankees. In his first week at Triple-A, Gleyber Torres took a step up in competition, as well as tried to get adjusted to a new position, third base. I guess I can cut him a little bit of slack. Torres went five for 18 (.278) with three runs batted in, four runs and a stolen base. He struck out six times which is a little concerning, but I expect him to turn things around in short order.

Rhys Hoskins, 1B Philadelphia Phillies. With Tommy Joseph playing well, the Phillies should be in no rush to bring up future first bagger, Rhys Hoskins. Hoskins isn't going to make it easy on them however, as he went seven for 18 this week (.389) with a dinger, nine runs and even added a stolen base. He going to be a very good player for Philadelphia someday.

Jose De Leon, Tampa Bays Rays. Another graduate! At least for one day, that is. Buster Olney reported on Memorial Day, that Jose De Leon would be called up to Tampa Bay, and sure enough, he made his 2017 debut on Monday against the Rangers. He gave up three runs in two and two thirds innings in relief, and was subsequently shipped back down to Triple-A. It looks like he was just there for a backup arm to starter Erasmo Ramirez, who also pitched in relief on Sunday. Oh well.

In his only start last week in Triple-A, De Leon gave up four runs in four innings on eight hits and a walk. Looks like he could use a little more seasoning in the Minors. He has only had three starts on the season, after all...

Brent Honeywell, Tampa Bay Rays. With Jose De Leon clearly ahead of Brent Honeywell in the pecking order, Honeywell needs to show even more to make an impression on Rays' coaches. He didn't do that this week. He lasted only three innings as he proceeded to give up seven runs on eight hits and a walk. We've seen better from him and hopefully he turns things around next week.

It might be time to put Lucas Giolito back on the 'ol Report Card.

Reynaldo Lopez, Chicago White Sox. Of course. Just when I remove Lucas Giolito from the report card because of his poor performances and replace him with Reynaldo Lopez, they proceed to reverse fortunes on me. Lopez pitched an absolute stinker this week, going four innings, giving up eight earned runs on eight hits and three walks. Giolito on the other hand pitched a seven inning, no-hitter on Thursday. I think they did it just to "eff" with me...

Josh Hader, Milwaukee Brewers. The carnage continues among pitchers this week, as Josh Hader once again disappointed. Hader lasted only three innings, giving up eight runs on nine hits and three walks. Ouch! With Milwaukee performing well, Hader won't be rushed into action in the Big Leagues. That's a very good thing, because he appears to be barely treading water in Triple-A.

Michael Kopech, Chicago White Sox. A pitcher on my list finally pitched well! Well, he did ok I guess, but compared to the other garbage performances this week, Michael Kopech looked like he was Clayton Kershaw on the mound. Kopech went five innings, only giving up one earned run. He's known for his strikeouts, and he didn't disappoint, fanning six batters in those five innings, but he also added four walks. I guess we will have to take some bad along with the good that he offers.