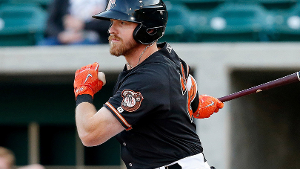 I've decided to change things up a bit. I am no longer going to be doing the prospect report and grading the players on their weekly performances. With the small sample size of a week, it seemed a little unfair dishing out bad grades if a player simply had a bad week. I don't want to damage those guys' psyche's too bad.

From here on out, I am simply going to state their stats, followed by a brief writeup. Quick, easy and to the point. That's my motto. Well, normally I'm long winded, but I'm going to try my best to be concise, yet fill your head full of useful information. Yeah, I'm no teacher, but I can jam some info into your noggin whether you want it or not...

Ozzie Albies, 2B Atlanta Braves. 3-14 (.214), 0 HR, 1 RBI, 3 R, 0 SB. Ozzie Albies may not have had a great week last week, but he's been great the last two months, and as of Sunday, is hitting .289 with seven home runs, 60 runs and 21 stolen bases on the season. I would gander we could see Albies get some action in Atlanta sometime in late August or early September. 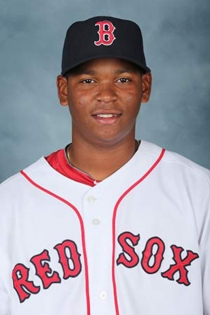 Rafael Devers may have a baby face, but he plays the game of baseball like a man.

Rafael Devers, 3B Boston Red Sox. 5-11 (.455), 1 HR, 2 RBI, 4 R, 0 SB. The Red Sox supposedly made an attempt to land Todd Frazier this week to fill their need at third base, but were ultimately beat out by the rival, Yankees. The Sox will be a team to monitor to see if they can score another third baseman before the trade deadline, and if not, we could see Rafael Devers sooner rather than later in Boston. He's only 20 years old, but has flown through their farm system as he was promoted to Triple-A, Pawtucket this past week. He didn't waste anytime as he smacked a home run and is showing that he can produce no matter where he is at.

Derek Fisher, OF Houston Astros. 3-13 (.231), 0 HR, 0 RBI, 2 R, 0 SB. Derek Fisher has the rare power/speed combo that can really help you in fantasy baseball. So far he is hitting over .300 on the season with 20 home runs and 14 stolen bases, and while he may strike out a little more than I would like, he should be rostered in all formats when we see him in Houston.

Amed Rosario, SS NY Mets. 5-13 (.385), 0 HR, 1 RBI, 3 R, 1 SB. I give up with the Mets. The Mets' infield made two errors on Tuesday night and they need Amed Rosario desperately to shore up their defense. They need a spark, and Rosario can provide that. Now let's see if the Mets can do the smart thing, and give him the promotion he deserves.

Brendan Rodgers, SS Colorado Rockies. 6-17 (.353), 3 HR, 3 RBI, 5 R, 0 SB. Brendan Rodgers is the number ten overall prospect in baseball according to MLB.com and the Colorado Rockies top prospect. He is destroying Douncle-A pitching, as he's hitting .359 with 16 home runs and 54 RBIs on the season, and I'm not ruling out the possibility of seeing him in Colorado later this season.

Lucas Giolito, Chicago White Sox. 1 G, 5 IP, 3 ER, 5 H, 4 BB, 6 SO. Another typical performance from Lucas Giolito. Gives up a few runs, has a good number of strikeouts, but walks more than he should. Giolito will likely be the first of the White Sox pitching prospects to get the call in my opinion, but he's a streaky player who will give you some gray hairs. 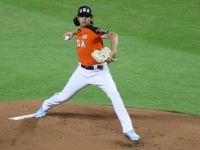 Brent Honeywell's performance at the Future's Game showed us why so many are high on him.

Brent Honeywell, Tampa Bay Rays. Brent Honeywell didn't have a start in Triple-A this past week, but he's still riding the high of being named the Futures Game MVP. He went two innings and struck out four in the Futures Game, and he looks to be one of the next pitchers to be promoted to the Bigs.

Michael Kopech, Chicago White Sox. 1 GS, 6 IP, 4 H, 2 BB, 5 SO. Michael Kopech is the highest rated pitching prospect in the White Sox organization and was pretty impressive this week. He went an inning in the Futures game and shut down the side and also looked good in his follow up performance. He is still only 21 years old and currently pitching at Double-A, so I don't expect to see him in the Big Leagues this year, other than a possible brief, late season stint.

Yohander Mendez, Texas Rangers. 7 IP, 1 ER, 6 H, 1 BB, 8 SO. When we had Lawr Michaels on our podcast, Yohander Mendez was a name of a pitcher that he told us to keep our eyes on. Since I respect Lawr a ton, I'm taking notice. Mendez is only at Double-A as of now, but he has a 3.78 ERA, 1.14 WHIP, and 96 strikeouts in 112 innings. I expect him to move to Triple-A soon, with a late season call up to the Rangers likely.