We have now passed the April 13th deadline where teams have gained an extra year of control over these underpaid guys in the Minors who are just trying to earn a decent wage. Down with these corporate greed monsters!

Anyways, with that date in the rear view mirror, hopefully we start to see a few of these guys trickle into the Major Leagues. Who will be the first to get the call? It depends on a few things such as how they are playing and if their club has room for them, but let's try to sift through everything together so you can get the jump on your league mates!

People are waiting patiently to see Ronald Acuna in Atlanta, but it appears the Braves don't care what we think...jerks!!!

Ronald Acuna, OF ATL. Many thought that we would see Ronald Acuna in Atlanta this past weekend, but alas, it was not meant to be. While he has nothing left to prove in the Minors, the Braves seem intent on riding with Preston Tucker and Nick Markakis until Acuna's bat heats up. I don't expect the calendar to change to May without seeing Acuna in the Big Leagues.

Nick Senzel, INF CIN. It appears as the Reds have plans to place Nick Senzel at third base, as they moved him to third for the Triple-A Louisville Bats post the Eugenio Suarez injury. Once he proves that both his glove and his bat are good to go, I think we see Senzel in Cincinnati sometime in the next week or two.

Gleyber Torres, INF NYY. Gleyber Torres is red-hot right now, and I'm honestly surprised that he hasn't been given the call from the Yankees already. He has passed the deadline where the team has gained an extra year of control, and with several injuries to the Yankees infield, I wouldn't be surprised to see him in New York sometime in the next few weeks. 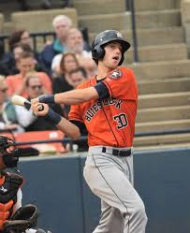 Kyle Tucker might look like the kid you used to steal lunch money from, but don't let his looks deceive you...this dude can hit.

Kyle Tucker, OF HOU. Kyle Tucker led the Majors in runs batted in during Spring Training and he's keeping it going as hit knocked in five this past week and now has eight on the season. I expect to see Tucker in Houston sometime mid-summer.

David Dahl, OF COL. A serious stomach bug took out David Dahl this week, but he looks to return soon.

Willie Calhoun, OF/DH TEX. He may have come across as a bit of a diva, but Willie Calhoun had a pretty good week for the Triple-A Round Rock Express. He hit .333, smacked a home run and scored six times in 27 at bats. With the Rangers suffering a plethora of injuries, Calhoun could see the Majors sometime in May. Whether the Cards suffer an injury, or Adam Wainright proves ineffective, I expect to see Jack Flaherty in St. Louis sooner rather than later.

Jack Flaherty, SP STL. After striking out 11 batters in his first outing at Triple-A Memphis, Jack Flaherty came back down to earth a bit as he gave up three earned runs in six innings of work. It's still a quality start, but expectations were high after his seven inning, 11 strikeout debut in Week 1. Out of all the pitchers on this list, I expect Flaherty to be the first one on a Major League squad.

Walker Buehler, SP LAD. It's always nice to get off to a good start and Walker Buehler is doing just that. He has yet to give up more than one earned run in an outing and has an 11:2 strikeout to walk ratio. I think he spends the next month in the Minors to limit his innings before we see him in a Dodgers uniform sometime in May.

Michael Kopech, SP CHW. The young flamethrower didn't pitch in Week 1, but had two impressive performances this past week. I don't expect to see him in Chicago until later this summer, but strong strikeout numbers should follow him wherever he goes.

Mitch Keller, SP PIT. Keller did not get a start this past week.

Victor Robles, OF WAS. Out indefinitely with a hyperextended elbow he suffered diving for a ball in center field.

Eloy Jimenez, OF CHW. Jimenez is nearing a return from a strained pectoral injury and should be back at Double-A Birmingham soon.

Luiz Gohara, SP ATL. It appears Luiz Gohara should get his first start of the season this week as he recovers from an ankle injury. I can see him joining the Braves in the middle of May if he looks sharp.

Forrest Whitley, SP HOU. Whitley is currently serving a 50 game PED suspension and will likely not see the Majors until a potential late-season call up.