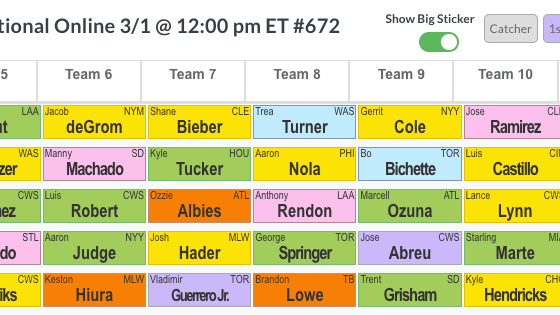 My First Ever TGFBI Draft Recap

A year ago, I began this journey of fantasy analysis. Honestly, I had no clue about TGFBI and it ended up too late to sign up last season. I learned that TGFBI stood for The Great Fantasy Baseball Invitational run by Justin Mason, one of the great people in this community. Over the past year, as I learn more about TGFBI and the fantasy baseball community, I find it's a massive and competitive league full of sharp minds. Often, I found myself thinking I want this player soon, then someone would take them shortly thereafter. Maybe that's a good thing as I valued players near where others drafted them? You can find the rest of the draft board for TGFBI League 6 here.

For this piece, I'll break down some of my picks as well as my fantasy baseball draft strategy heading into TGFBI. It's a rotisserie scoring league with 15-teams that includes two catchers, five outfielders, a corner infielder, a middle infielder, and one utility spot with of course the other infield positions (1B, 2B, 3B, SS).

Then it's nine pitching spots with no relief or starting pitcher designations. It's important to note that there's a 1,000 innings pitched minimum, which is why I focused on high IP guys early on.

I drafted at pick ten of 15, which gave me the chance to potentially grab two top-20ish players in my mind. I'll dig deeper into how I adjusted during the draft and players I didn't plan on taking but pivoted towards at certain ranges. I believe I started studying and analyzing fantasy baseball information in October 2020, which is the heart of fantasy football season. That said, it's the earliest I've ever focused on baseball. Thankfully, I stumbled into a few best ball and redraft leagues that helped give me practice in drafting earlier than ever.

One of my pre-draft strategies for TGFBI involved taking starting pitchers early. Although it felt odd to pass on higher valued hitters early on, it feels like the market for starting pitchers I feel good about drafting dries up quickly. I debated taking a starting pitcher at pick ten overall, but gladly took Jose Ramirez, who I believe is in a tier of his own at third base with the steals. I planned on Ramirez, Trevor Story, or Christian Yelich, but ended up with Ramirez because I believe I can find shortstops later such as Paul DeJong.

You can see I took three starting pitchers in the first five rounds in Luis Castillo, Lance Lynn, and Kyle Hendricks. Lynn and Hendricks aren't sexy, but I love that they can eat innings with quality ratios. Then the second hitter I drafted was Starling Marte, a power/speed threat, which I hoped for. I planned on Marte or George Springer with that pick and took Marte who should provide 20-25 steals. When looking at auction values, you'll find that starting pitchers likely have lower auction values than the hitters that I passed on. However, my draft plan started how I wanted it - starting pitcher early, wait on bats, and then find starting pitchers in that middle or late-round range.

Another pre-draft strategy - find at least one closer I felt good about, and that ended up as Ryan Pressly. I planned on Pressly or Raisel Iglesias, who went right before me to Ariel Cohen. Justin Mason, Ariel, and I took three closers in a row, so I lucked into Pressly, who I wanted. I planned on drafting a catcher in rounds 9-12 but had to pivot when players went off the board. I also prefer to secure a second middle-tier closer of Rafael Montero or Richard Rodriguez, but both went right after and right before my picks in rounds 11 and 12. Some regrets there.

Later on, in drafts, I find a lot of streamer pitchers that I like, so I felt fine about hammering bats and an occasional pitcher in the middle rounds. One other final draft strategy that I planned going into this TGFBI draft - prioritize playing time. I realized I'm a boring drafter and prefer taking stabs at players that have shown or proven production with almost guaranteed playing time. Hopefully, that strategy pans out, and if not, I'll adjust and learn in the future. At a certain point, I drafted the guys I believe in such as Hunter Dozier, Bryan Reynolds, and Jameson Taillon. I wrote up a piece on Taillon here earlier and I figured he was a calculated risk I plan on taking given the mechanical changes.

Round 2: Luis Castillo (debated him or Aaron Nola)

Round 4: Starling Marte (wanted him, Whit Merrifield, or George Springer)

Round 5: Kyle Hendricks (I love targeting him anywhere I can as my SP3)

After five rounds, I felt good about my start as it went according to plan.

Then in rounds 6-15, I hammered mostly hitters with one closer. I wanted a second closer in that span, but missed out on the two I targeted in Rafael Montero and Richard Rodriguez. Since I selected Rhys Hoskins instead, those two went in between my next pick in round 12. Even though Hoskins could drain my batting average, I love the guy, so I took my guy and hoping for full health with the elbow injury late last season.

Similar to Kyle Hendricks, who I actively target, Paul DeJong is a shortstop I seem to land later in drafts if I pass on shortstops earlier. Hopefully, I'm not oversaturating my lineups with these two. One regret - taking Max Kepler since I love Jose Urquidy, Jordan Montgomery, and Aaron Civale, who all went around my pick. However, I took my guy I can't quit in German Marquez the previous round, so it didn't make sense to force those starting pitchers on my team.

About a month or so ago, I wrote up a piece on Jameson Taillon shortly after the trade to the Yankees. I noted some of the mechanical adjustments with the shorter arm circle to alleviate pressure on his elbow. As my SP5 on my roster, I took the risk because I think Taillon is in for a bounceback season. I prayed for Buster Posey all draft since I whiffed on Christian Vazquez (my prime C1) target in two catcher leagues. Thankfully, I landed Posey in round 17. During this stretch, I continued my plan of finding hitters with close to guaranteed playing time and plate appearances in Jorge Polanco (assuming health) and Bryan Reynolds (one of my top 2020 sleepers).

I drafted Diego Castillo as my second reliever or "closer," which we'll use lightly. However, I think Castillo could help provide me with some strikeouts, and hopefully snag a win or save from time to time. Two of my favorite late-round guys to draft involve Starlin Castro and Freddy Peralta. Castro is boring similar to Jonathan Schoop but should play every day in a decent lineup. Expect Peralta's ADP to soar with the recent tweet flashing his nasty stuff in Spring Training.

Fastball Freddy is on fire!

I rounded out my 24th round pick with catcher Ryan Jeffers. Sure, he'll share playing time with Mitch Garver. However, at this point, most second catchers seem to provide negative value or unlikely to provide positive value throughout the season. My tiebreaker as I debated Elias Diaz or Omar Narvaez included the 13.9% barrel rate for Jeffers in the small sample.

In the final six rounds, I sometimes lose focus and stray from what my team needs. Thankfully, it's a slow draft, meaning I can overanalyze each pick and the other picks made by the sharks. Throughout the draft, I attempted to assess what my team needed. Outside of catcher, my glaring weakness - saves. That said, I speculated on Jordan Romano and Jake Diekman. With Romano, he recorded two saves towards the end of the season. He finished with a 1.23 ERA, 0.89 WHIP, 36.8% K%, and 8.8% BB%. I'm concerned about Kirby Yates' elbow injury, but Yates debuted on Thursday. Yates pitched an inning and allowed two hits.

With the Trevor Rosenthal groin injury, I expected Jake Diekman to go off the board earlier. However, he lasted to me in the 27th round. Before the Rosenthal injury, Diekman projected as the Athletics closer, so I'm hoping he'll provide me a few saves on occasion. Or I'll cut him after the first couple of weeks. Diekman added seven inches of horizontal movement on his slider that intrigued me enough as a speculative reliever.

A baker's dozen of Jake Diekman slider whiffs from 2020! 🔥

Trevor Rogers and Alec Mills - two guys with completely different profiles. Rogers boasts the filthy arsenal even though the surface metrics looked ugly with a 6.11 ERA and 1.61 WHIP in 28 innings. His slider finished with a 13.2% swinging-strike rate and changeup elicited a 23.6% swinging-strike rate. I wrote about Trevor Rogers as a sleeper pitcher that needs more love, and Ray Butler of Prospects365 also wrote up a deep dive on him. Did that confirm my excitement? Maybe so.

On the flip side, Alec Mills is a command and control pitcher with mediocre velocity. I like Mills as a potential streamer to start the season against the Pirates, and if he stinks, then he's an easy cut. Also, Eno Sarris mentioned that Mills tunnels his pitches well and Mills ranks highly in his SP rankings with the high Command+ rating.

It seems silly, but when it came to my last pick, I wasn't sure who to draft. Do I go upside? Or a safe guy with playing time? After some side conversations with a seasoned fantasy player, I went with upside in Jazz Chisholm.

I still don't like two catcher leagues since it feels like negative value at certain points. I even debated drafting a third catcher (gross). My draft started as I hoped, but I realized I needed to adjust during the draft. Honestly, I have less experience drafting and playing fantasy baseball than I do fantasy football. Now the challenge - in-season management. Hope to hold my own in TGFBI and learn from mistakes along the way. I joked with a buddy and fellow analyst and player, Dave Swan, about how this game of fantasy baseball is quite challenging.