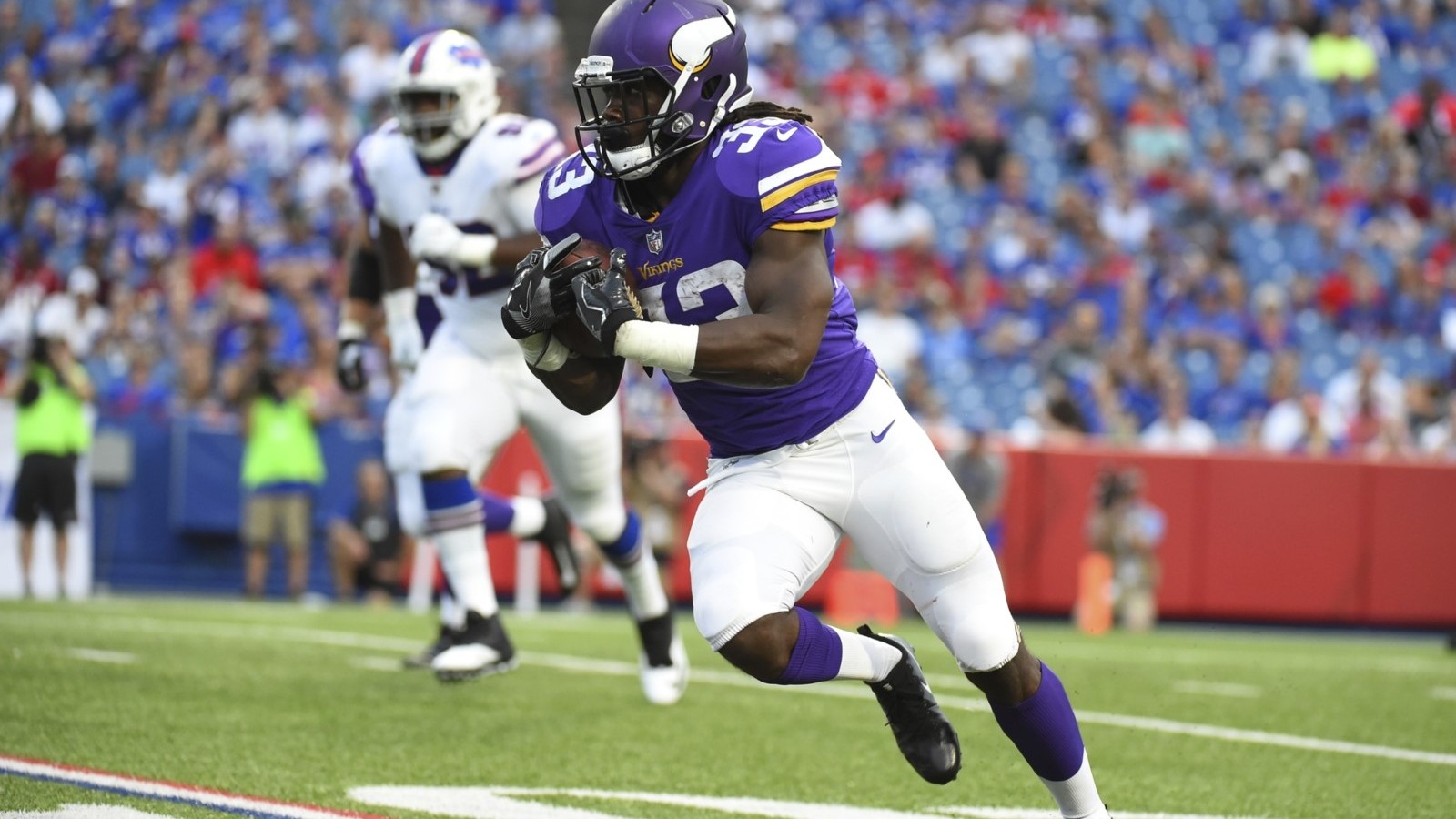 My guys! Everyone has them. Guys that you want on as many of your teams as possible. Guys that you might say "ADP be damned!", guys that you fully believe in, guys that you have a man crush on. I am going to chronicle each position and give you My Guys that I think are going to have great years. Let's go through running backs and I will tell you a tale of guys that I like at each layer of the draft. If you want to check out the quarterback article, you can do so here. Follow me on Twitter @fightingchance.

Dalvin Cook, Minnesota Vikings.Sure he tore his ACL last year, but were you watching Cook last year? He averaged over five yards per carry in three of his four games, and in the one he didn’t do that he had 97 rushing yards and five receptions for 72 more yards. He has a very bright future in this league. The offensive line is solid, and the passing game should be so good that defenses won’t be able to stack the box to stop him. He will get you plenty of catches out of the backfield, although not at Bell and Gurley range. I expect him to get 1,200 rushing yards, 55 catches, and at least ten touchdowns.

One More: Todd Gurley, Los Angeles Rams. Duh! I mean there’s not much to write about liking the guy who many feel is the top at the position. He bounced back in a major way, and now that he is in a big boy offense instead of the elementary crap Jeff Fisher was running, Gurley is a star. Running, receiving, scoring, Gurley does it all. He is my number one overall pick in all formats.

OK, one more: Jordan Howard, Chicago Bears. Tarik Cohen became more of a fantasy player last year, and that has made many people discount Howard. Don’t fall into that trap. Howard is a beast, he will be the Bears three down back, and he will have another 1,100 yard season. He won’t be much of a pass catcher, but the kid has crazy skills. He should be even better this year now that the Bears will be running an actual offense that might score points and I think double digit touchdowns is possible.

Kenyan Drake, Miami Dolphins. I’m not buying Frank Gore’s old ass. Sure he was ok for the Colts the last few years, but he hasn’t even averaged four yards a carry for the last three seasons. He doesn’t catch any passes, and is old af. Drake was electric once given the starting job after the Dolphins traded Jay Ajayi. He has speed to burn, and can take any carry to the house. Somehow he is going as the 20th running back, but I am DAMN happy to have him as my RB2.

Others: Royce Freeman, Denver Broncos. Let’s just get this out in the open. Devontae Booker sucks. He has been in the league for two seasons. He has averaged under four yards per carry in both seasons. After getting 174 shitty carries in his rookie season, he was only given 79 shitty carries last year. So, don’t fall for this “committee” nonsense the coaches are saying. Freeman has outperformed Booker so far, and even if he doesn’t get 15 carries in the first couple of weeks, it won’t take long until he is the bellcow back. His ADP is going up a little higher than I’d like, but I still think he will be a great player this season.

Sony Michel, New England Patriots. A preseason knee injury made everyone jump fully off the bandwagon due to overreaction. Another injury to Rex Burkhead and James White started going too soon. This might take a couple of weeks, but I expect Michel to lead the backfield. The fact that he is the 38th running back off the board is criminal and I expect a solid year from him.

Others: Chris Carson, Seattle Seahawks. Everyone loved Rashaad Penny, but he got hurt and I thought he was overrated anyway. The Seahawks offensive line sucks something awful, but Carson is a talented runner. If you can get him at the right spot he could help you.

Chris Thompson, Washington Redskins.Thompson is one of the best pass catching running backs in the league. And when Derrius Guice went down for the year, the ‘Skins didn’t have much on their roster to make up for that loss. They signed Adrian Peterson, but he showed last year he was basically toast. Now I don’t expect Thompson to get 15 carries a game, but maybe with that injury he gets to ten, and with his ability to catch 70 passes in the season, I am all about him for 2018.

D’Onta Foreman, Houston Texans. This one might not pan out until the middle of the year depending on health. If he ends up on the PUP list to start the season, that would knock Foreman out for the first six games as he rehabs an Achilles injury. However, when he comes back I do expect him to immediately start cutting into the carries of Lamar Miller. Foreman showed last year that he was the superior talent to Miller, and if he hadn’t gotten hurt last year, I believe he would have outcarried Miller. So, those of you drafting Lamar Miller better hope and pray this guy doesn’t come back healthy any time soon.